I saw “Peter Rabbit” in a theater packed full of children Saturday afternoon in Manhattan and was as enraptured as they were by the Columbia Pictures film, which opens February 9.

“Peter Rabbit” stars the mischievous and adventurous blue-jacketed hero (voiced by James Corden) involved in a feud with Mr. McGregor (Domhnall Gleeson) that escalates to ridiculous heights in a rivalry over the affection of McGregor’s beautiful next neighbor (Rose Byrne), who has a soft spot for the gregarious, plant-eating mammal. Sony’s new half-digital/live-action hybrid takes many liberties with the Beatrix Potter classic and goes for broad laughs which worked with the kiddies at the screening I attended.

The glamorous world premiere too place later that evening at the Grove Theater in Los Angeles.

Check out Margot Robbie’s adorable bunny purse. She voices Flopsy in the film, which has a mix of mainly Australian and English voices. 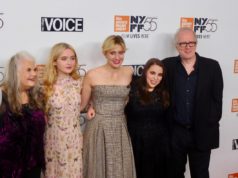