GUILLERMO del TORO won the Directors Guild of America won the top award for Outstanding Directorial Achievemen for “The Shape of Water.” The honor was awarded to del Toro last night at the 70th Annual DGA Awards at the Beverly Hilton in Beverly Hills.

The Fox Searchlight Picture has been nominated for 13 Academy Awards, including for best feature and best director. Del Toro also received the Golden Globe for best director for this fantastical love story between a mute woman (Sally Hawkins) and a male sea creature. Del Toro’s win by the DGA, considered a reliable forecaster for a best director Academy Award, puts the Mexican director in front runner position. 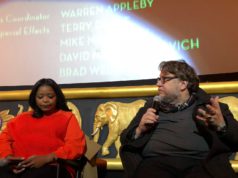