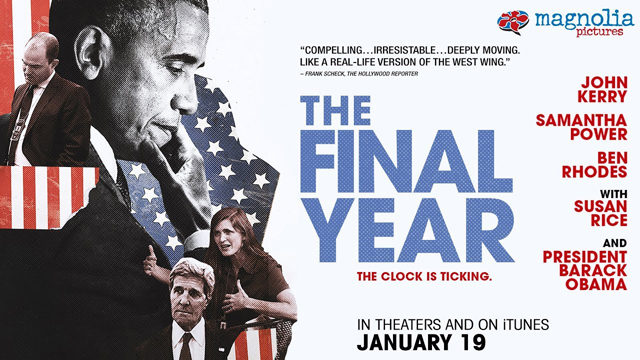 Barker and his crew began filming in late 2015 and wrapped at 3:00 a.m. on the morning of January 20, 2017 – hours before the Trump inauguration. They used minimal equipment, no lights, and the smallest possible crew.

The two people in the film who captured my attention the most were Ben Rhodes, who helped draft the 9/11 Commission’s final report and was tasked with writing speeches for Obama, and Samantha Power, an Irish immigrant who came to the U.S. at the age of 9 and became a U.S. citizen in 1993. After college, she was a journalist in Bosnia during wartime and later wrote “A Problem from Hell: America and the Age of Genocide,” which won the Pulitzer Prize. It was that book that caught the attention of then-Senator Barack Obama.

Power talks in the film about feeling heartbroken for the people of Aleppo, Syria, but also notes that Iraq and Afghanistan taught us that our intervention can make situations worse. About Obama, she says, “He carries around the human consequences of his decision-making.” If these officials didn’t truly care about their jobs and how their actions affected people around the world, then they’re the best actors I’ve ever seen.

In the press notes for the film, director Barker says, “This is a story about a small group of people who came together nearly a decade ago, rallying behind a man and his cause. They set out to change the world, and against all expectations, found themselves in a position to effect that change. They believed they could redefine American foreign policy, promote diplomacy over large-scale military action, and alter how we as a nation think about questions of war and peace. They had their share of victories – the Iran deal, climate change, Cuba – and despite their own internal divisions over one of the toughest foreign policy questions of our age (Syria), at the outset of 2016, they believed they had largely succeeded and that their legacy would define U.S. foreign policy for decades to come.”

In the footage, we see President Obama visiting ancient sites in Greece, saying that these sites give you “perspective.” We see Samantha Power comforting Boko Haram victims at a refugee camp in Africa. We hear discussions of Putin as someone who pursues his own interests rather than the interests of Russia and its people. Throughout, there are voiceovers of dissenting voices who disagree with the policies of the Administration.

Then, we see the staff watch as Donald Trump wins the election, and their hopes of leaving a foreign policy legacy are largely dashed.

After Trump’s election, Rhodes is obviously shell-shocked and unable to put into words how he feels. Over the credits, we watch Power on her last day as she slowly removes her seven-year-old son’s artwork from the walls of her office, places them in a box of her belongings, and carries them out of the building.

The film provides a portrait of people who were striving to make the best decisions they could in some of the world’s most difficult jobs. All I can say is: Watch it and weep.