Australian actress Margot Robbie stars as the blue-collar, foul-mouthed, big-haired disgraced Olympic ice skater Tonya Harding in “I, Tonya.” Sebastian Stan co-stars as her dim-witted and violent on-and-off boyfriend/husband Jeff Gillooly, who put the plan in motion 23 years ago to hire thugs to wack skating rival Nancy Kerrigan in the knees and end her Olympic chances. Things didn’t work out as planned; Gillooly ended up in jail while Harding’s dreams of Olympic glory were dashed forever.

Directed by Craig Gillespie, the movie taps into a side of Tonya Harding few people ever knew. This is a surprisingly sympathetic and poignant look at the ice skate who for many years was the punch line for late-show comics.

And Robbie is sensational as Harding, never sugar coating her character’s self-destructive and less appealing tendencies but also focusing on her undeniable athletic talent, which has often been forgotten.

Even now, if you look her up in Wikipedia, Harding is denied her due respect, where she’s described as an ice-skater and boxer. She actually boxed only about four matched. After the Kerrigan debacle Harding was banned for life from competitive skating so she began boxing to pay the bills. She usually entered the boxing ring with boos but kept going. She had a heartbreakingly, tough upbringing and her resilience is very all-American and even admirable.

What’s forgotten is that she was the first — and now almost 25 years later — the only American to land a triple axle. There are only two other women in the world who have succeeded. Unlike most Olympic aspiring skaters, she came from a blue-collar background and her mother, an abusive and ruthless woman (played by the scene-stealing Allison Janney with a parrot on her shoulder) worked three jobs to pay for her ice-skating lessons and sewed all her daughter’s costumes by hand. For all her hard work and hopes for Tonya, she slapped her around more than she encouraged her to greatness.

Robbie spent four months preparing for the skating sequences and although she’s not doing the triple axles — those are computer tricks — she does nail many of the movements and looks convincing. But mainly she expertly navigates the tragedy and drama as well as the pitch-black humor to create a film that is as heart wrenching as it is hilarious.

Robbie has already received accolades, including a Gotham Award nomination and an Independent Spirit Nomination for best lead actress. She’s a shoo-in for a Golden Globe nomination in the comedy category and possibly an Oscar nomination.

The New York premiere took place last week at the Village East Cinema, and the evening’s hosts were CALVIN KLEIN, NEON & 30WEST. Steven Rogers wrote the screenplay and Paul Walter Hauser co-stars as the real-life dim-witted character who hired the knee-wacking thugs and suffered from the delusion that he had C.I.A. connections. (The truth is funnier than fiction in ‘I, Tonya.’) 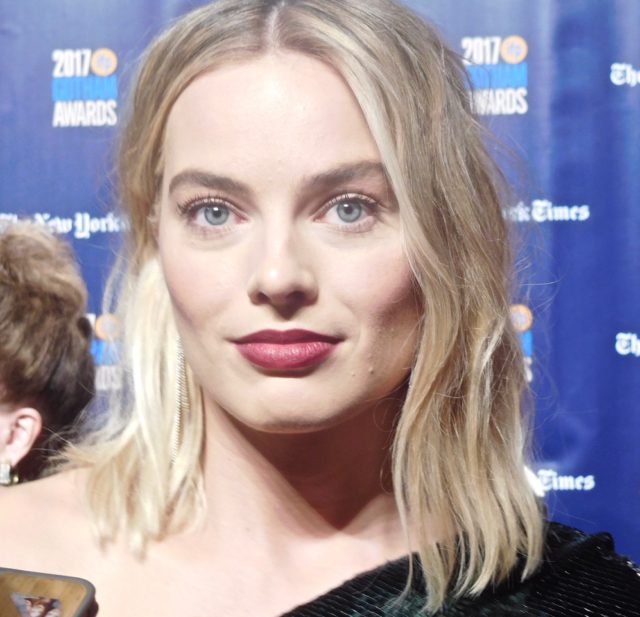