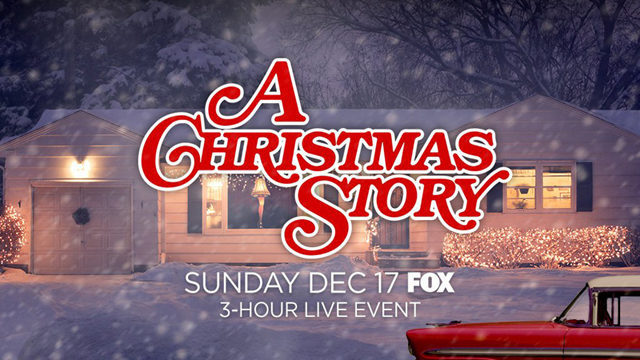 The music for “A Christmas Story: The Musical” and “A Christmas Story Live!” was written by Benj Pasek and Justin Paul, who won the Tony Award for the smash Broadway musical “Dear Evan Hansen” and an Oscar and Golden Globe for their original song in the hit film “La La Land.”

Producer Marc Platt spoke with journalists by phone this week about the show. He’s the Emmy Award-winning producer of FOX’s “Grease: Live” and an Academy Award-nominated producer, most recently for director Damien Chazelle’s “La La Land” and Steven Spielberg’s “Bridge of Spies.” Platt is also the Tony-nominated producer of the Broadway mega-hit “Wicked,” which has been seen by more than 50 million fans worldwide and globally has racked up $4 billion.

Platt has developed some of the most successful film, theater, and television projects of the last 30 years. His film resume includes such titles as “Legally Blonde” and “Into the Woods.” A former film executive, Platt served as president of production for three movie studios, where he oversaw box office and critical successes, including “Philadelphia,” “Rudy,” “As Good As It Gets,” “Sleepless in Seattle,” “Jerry Maguire” and “The Silence of the Lambs.”

Below are excerpts from the interview with Marc:

On the changes we’ll see in the live version of “A Christmas Story”:

Some of it we want to save as a surprise, but Pasek & Paul have written some beautiful and exciting new music for our telecast. Some of the songs from the original Broadway version have been revised or actually completely rewritten. When a writer gets a second chance to look back on something, it’s a great opportunity to say, this was really good, but we could even do it better. There are a couple of those.

For example, there’s a song in the original Broadway version called “Sticky Situation” which still exists in our telecast, but it’s been completely redone as a new song. Although the first one was good, this is more exciting, it fits into the narrative, and it’s a bigger, more robust number….

The other thing that this telling of “A Christmas Story” has enabled us to do in a very exciting way is to elaborate upon the beloved film in a couple of different ways. I’m going to give you just one example. I don’t want to reveal too much because I do want to sort of save it for fun, but in the film, there is a character of Schwartz, who is little Ralphie Parker’s best friend. And if you know the film, when Ralphie ends up saying a very bad word, his mom says, “Where did you hear that from?” And he blames it on his friend, Schwartz….

In the movie, the mom then calls Schwartz’s mother, and you just hear her screaming on the phone when she’s been informed that her son was the one who taught Ralphie the bad word. In our storytelling, because we have the time to elaborate and to do it, we’ve actually created the character of Schwartz’s mother, Mrs. Schwartz, so Ralphie gets to go to the Schwartz house and apologize to his best friend Schwartz for blaming him. And in so doing, he gets to meet Schwartz’s mom, and a new musical number ensues.

He goes to Mrs. Schwartz, and she says, “Why do you look so glum?” And he tells her what he’s been seeking for Christmas, which is sort of the essence of “A Christmas Story,” the one present, the one toy that the kid wants, and she sings a new song in there that’s been created just for the telecast. So that’s an example of a new song.

On the biggest roadblocks to adapting a musical from stage to television:

What we’ve done here is we have a film, first and foremost, that’s beloved by people everywhere. It’s become such a classic. Many people can quote you scenes and lines like “Don’t shoot your eye out,” or they can remember the tongue sticking to the flagpole. And so we start with the film, and we lean very much into the film.

What you’re going to see is something that very much resembles certainly a live film. It’s going to feel very cinematic; the environment is very immersive. You’re going to feel like you’re in that town in Indiana and in that home of Parker. But it will also be live, and you’ll be very well aware of it.

I think the challenges of adapting something so beloved is to first, make sure that you are respectful of the original material and that you’re delivering for an audience all the elements that people who loved the film need to see to be satisfied. And the same would stand with the musical. You want all those great musical moments and that beautiful score to land, but you also want to deliver an experience that is unique, that no one has ever experienced before by this new genre of a live television version.

I will also say that what’s really interesting about a live television event is that one recognizes the actual relevancy and power of network television to provide an in-the-moment collective experience that’s sort of unparalleled. So that while you might watch “A Christmas Story Live!” with your family, the whole country will be watching, and whether you’re aware of that on social media or whether just aware that we’re all experiencing it in the same moment, there’s something very exciting and very powerful about that.

We were very fortunate to have attracted a brilliant cast, many of whom, by the way, interestingly enough, have had tremendous experience on film, on live television, and on stage, which is very, very unique to find so many actors who have all of those different experiences. That’s number one.

Number two is they all share, interestingly enough, a love of the film as well. And I think that any adaptation when an actor walks into a role that has heretofore been indelibly imprinted on people from a past production or a past film, I think that the trick of it is to inhabit the essence of those original characters but then to make it very much your own interpretation.

What is it that Maya Rudolph brings to the mom, that, like in the original film, will make moms everywhere feel like “I know that mom”? “That’s who I am. That’s what I feel like.” And Maya does it beautifully.

What is it about Matthew Broderick as a storyteller? In the film version, for those of you who don’t know it, the voice of Jean Shepherd, the reminiscences that he has as the grownup Ralphie, if you will, are told in voiceover, and it’s a very, very significant part of the film. In the stage version, which also exists in “A Christmas Story Live!,” the storyteller becomes a character. The grownup Ralphie is actually a storyteller who takes the audience throughout the evening and tells us the story, much like the stage manager does in “Our Town.”

Matthew Broderick is a great storyteller. He feels like he is Ralphie grown up, and when he looks into the camera and tells us with irony and humor and warmth about his childhood and about all the things that happened to him on that particular Christmas, you can’t help but be engaged. You can’t help but relate to him.

As a sidebar, I find it interesting that the last time Matthew Broderick looked into a camera and spoke to the audience was a film called “Ferris Bueller’s Day Off” which was actually made right around the exact same time that “A Christmas Story” was. So there’s a degree of familiarity to it and comfort as well, and that’s just the tip of the iceberg.

Jane Krakowski plays Miss Shields, the teacher, and we’re able to make a bit more of her character as well. Not only is she known for television, not only has she performed in film, but she’s also a great actress of the stage, an award-winning actress, so to have her perform musical numbers and to bring the comedy of that teacher to life is a gem and a real gift to everyone.

Ralphie is a wonderful discovery. Once you get past the fact that he looks so much like Peter Billingsley, the original Ralphie, he becomes his own Ralphie, with his wide blue eyes and his beautiful singing voice, and he’s a real kid. I think what we tried to do in all the casting, which I think is one of the secrets of “A Christmas Story” casting, is to make all of our characters feel like real people, not like actors playing people.

On what he learned from producing “Grease Live”:

Of course, I learned much from it. The complexity of the logistics of putting on a live production are amazing, if you think about it. We have 14 cameras at work, as we did on “Grease,” and the way that I shoot it is like a film. It feels very cinematic. There are moments where you’re going to feel like you’re in the film, you’re going to almost forget that you’re live, so that means the cameras are cutting to different points of view within scenes frequently.

Now, think about it, how do you do that live? There are 14 camera guys in different positions. The choreography of how the cameramen move around so that you don’t see a camera guy pointing a camera when you’re cutting around, is as intricate as the choreography you see onscreen when there’s a dance number. So learning that was a big thing.

I first think they’re very talented songwriters in addition to being themselves good fellows. It’s a long story, which is probably not for this conversation, how I sort of became part of their lives, but years ago, one of my kids would listen to some of their music that they wrote in college, and that’s how I was first introduced to their music, and I thought there was a real voice to it.

Ironically, it turns out that that same kid [Ben Platt, Tony Award winner for Pasek & Paul Broadway musical “Dear Evan Hansen”] went on to star in a Broadway show written by Pasek & Paul, and my professional journey with them is hanging around to where I’ve worked closely with them in “La La Land….”

It’s a wonderful collaboration, and it’s one that we’ll continue in the future. We have many more exciting things lined up together. They have an understanding of how music and narrative interact. They have a sense of how to write from character as much as just writing good music, and all of that for storytelling, myself, it’s kind of a perfect marriage in that part. Music has always been a character in much of my work, even when I’m not producing a musical film like “La La Land” or a new stage musical like “Wicked” or a television musical like “A Christmas Story.”

If you look at a lot of my work, music is always a big character in them, so it’s a natural and easy collaboration. It’s one that has had some great success and one that I look forward to continuing for years to come.