Stand up comic Gilbert Gottfried, famous for telling tasteless and smutty jokes in a high-pitched, sandpaper voice, is the subject of director Neil Berkeley’s hilarious and moving documentary opening tonight at the IFC Center in the West Village.

In the Milton Berle room at the Friars Club (where else?) on East 55th Street earlier in the week, Gottfried, his surprisingly normal wife Dara, and Berkeley, participated in a Q&A following a special screening of “Gilbert” for invited guests, including fellow comics and other jokesters.

Gottfried has had a solid career as a comic since the 80’s although his jokes and language have have gotten even more X-rated. To the general public he’s probably best known as the voice of the Afflac duck — a long running gig Gottfried lost after tweeting a tasteless joke about Japan’s tsunami tragedy — and for voicing the parrot Iago in Disney’s “Aladdin.”

This documentary looks at his long and legendary career but is most fascinating as a behind-the-scenes look at Gottfried’s wacky but happy life, beginning with his growing up fairly poor on Avenue A in Brooklyn to his late-life happiness and success as a father and husband. 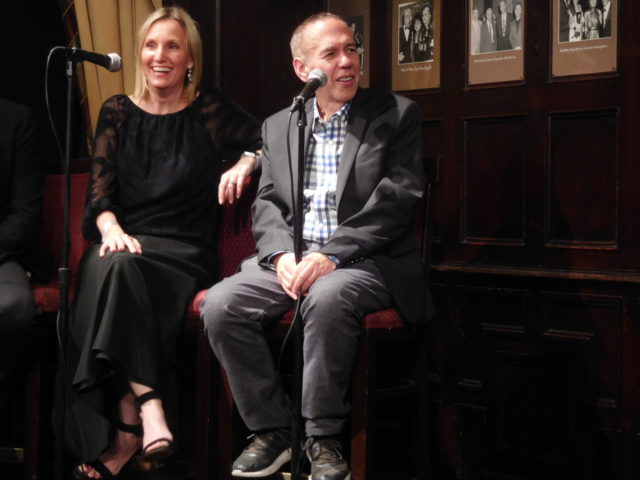 Anyone who’s caught his stand up knows how funny Gottfried is, but it’s the comic’s family scenes that will catch viewers off guard. Particularly moving are comments and recollections by his adoring sisters, Karen and Arlene. Arlene, a talented photographer and singer, was battling stage four breast cancer during shooting and her closeness and adoration for her brother is apparent. She noted that her brother’s comedy genius was apparent as early as age 15 when he started doing opening mike nights around New York City. The doc also features interviews and portraits of Gottfried’s mother and grandmother. Gilbert’s father, who died at age 66, worried incessantly how his son would make a living; sadly he never got a chance to witness his son’s success.

“I was definitely a mommy’s boy,” says Gottfried in the film. If he could he says, he wishes he could bring his mother and father “back for just for like short moments to say that I have two children that I named after the two of you. And that I’ve got a wife who’s madly in love with me and fans who run across the street to pose for selfies. My parents would be amazed.”

The incongruity between Gilbert’s foul-mouthed stand up and the ordinary domestic rituals of his family life are one of the hilarious features of the film. As he putters around his luxurious Manhattan apartment — a far cry from his Brooklyn tenement beginnings — the movie focuses on loving, happy scenes with his two adorable children and devoted wife. Then a moment later Gottfried tells a joke that’s incredibly dirty and profane but somehow doesn’t seem at odds with his intrinsically sweet personally.

The doc also focuses on the unlikely love story between Gilbert and Dara; he ends up with the beautiful blonde of his dreams and he can hardly believe his luck. And the warmth emanating between the couple on screen is just as palpable in person where the two laughed and giggled conspiratorially throughout the Q&A.

Asked how they met, Dara said she saw him a Grammy party in 1997. “I was there early,” she said. “He looked a little lost.” Later he walked her home and entertained her with turtle jokes.

Gilbert told the audience, “If you want to get ‘laid’ — he used a word I won’t repeat — here is the joke to tell,” he told the audience: “A snail is walking down the street. He gets attacked by a turtle. A cop shows up afterwards and he goes, ‘Could you tell me what happened?’ And the snail goes, ‘I don’t know, it happened so fast.’”

It’s an old joke but it’s all about Gilbert’s delivery in that deadpan sandpaper voice that made the audience howl.

The documentary also features scenes of Gilbert on the road and in generic hotels. In one he’s boarding a Megabus with fellow passengers who look at him incredulously. Gilbert is frugal or basically cheap. He is a hoarder; at hotels he makes off with miniature shampoos and soap which he brings back in his luggage and stores under his bed.

At one hotel he ran into a convention of World War II reenactment history buffs who wore uniforms of the Third Reich. They approached Gilbert sheepishly and apologized profusely. None of this was planned for the film. Cracked Gilbert to the director, “Those Nazis were a gift from god. When I watch the film I’m convinced we set it up, that’s how insane it is.” Later he cackled, “All those Nazis with their swastikas and iron cross are running over to me asking, ‘Can we do a selfie?’ Boy, I was thinking the Third Reich has gotten a bad rap all these years.”

Told during the Q&A that his presentation and voice was reminiscent of Jerry Lewis, Gottfried said Lewis was a major influence in his career and he met his idol once. “One of my biggest thrills was I was performing at some event, a Friar’s event in fact, and Jerry Lewis was there too. I did some jokes and afterwards he said to me sternly, ‘You are out of your fucking mind!’ And then there’s a slight pause… ‘And I wouldn’t have you any other way.’ And I thought that was one of the greatest thrills,” said Gottfried.

Referencing “The Wizard of Oz,” Gilbert said in one scene in the film, “Don’t look at that man behind the curtain, you don’t know how they’ll react to you after that.”

A look behind the curtain in “Gilbert” reveals a hard working comic who comes alive in front of an audience and has found late-life success and happiness with a surprisingly normal wife and children.

During the reception after the screening I asked Gilbert if there were any scenes in the film that were painful to watch?

“Yeah, all of them!” he screeched.

Catch “Gilbert” tonight and all weekend at the IFC Center. Gilbert, Dara and the director will be participating in Q&A’s, which if they are half as hilarious as their banter at the Friars Club will have you laughing yourself silly. Don’t miss it! 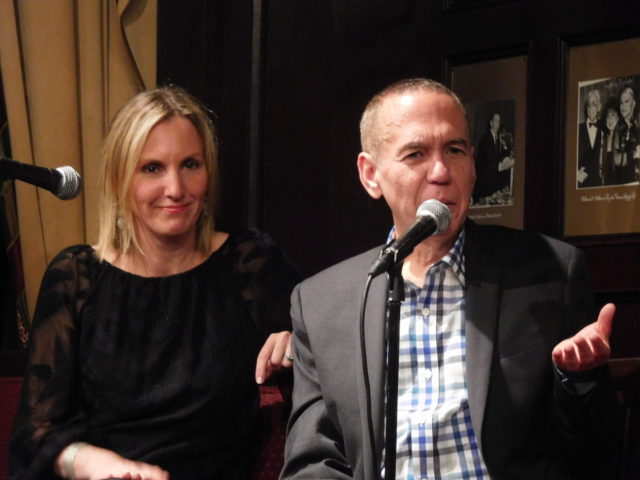