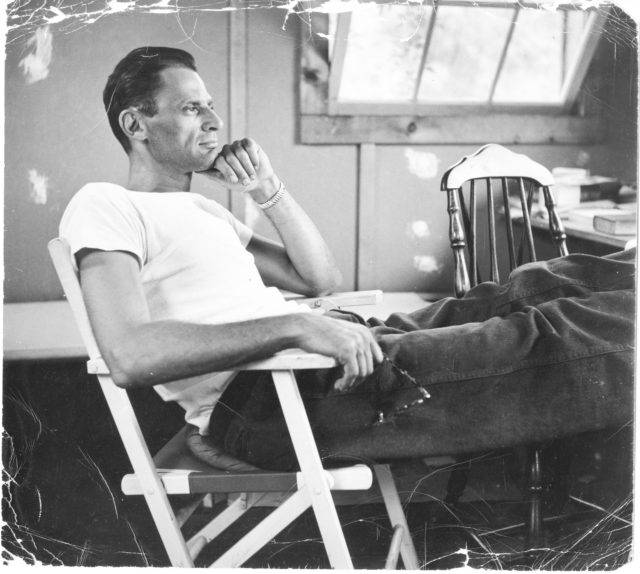 Rebecca Miller, the director of “The Private Lives of Pippa Lee” (2009), “Personal Velocity” (2002) and “The Ballad of Jack and Rose” (2005), has directed a wonderful documentary for HBO about her father simply called “Arthur Miller: Writer.” The film will premiere next week at the New York Festival. Do not miss it!

The film’s title refers to a question the director asked her father on how he wanted to be remembered; the legendary playwright of “Death of a Salesman,” ‘The Crucible’ and ‘All My Sons,’ replied, “writer.”

From an early age Rebecca Miller conducted impromptu interviews with her father around their house, and the result is an insider’s revealing portrait that is different from what we have ever seen of him. Then there are the rare archival photographs and videos in the doc, which will also be new to most people.

As you would expect, the documentary is a loving portrait of a father by his daughter. The film is emotional and relatable on that level alone. But Arthur Miller is a theater giant, and the documentary is primarily a celebration and consideration of his work. What it is not is a hagiography; the film is alive and fascinating. The doc dwells on how much Miller’s life was shadowed by McCarthyism and his marriage to Marilyn Monroe. Most interesting to me what how it places his life and work in a historical context and points out how life reflected his work. It is not overstating it to say Arthur Miller’s plays helped shape 20th-Century American culture.

Rebecca Miller’s interviews with her father are at the heart of the film. They are revealing; the questions sometimes pointed. The playwright’s warmth towards his interviewer shines through, and he lets down his guard.

Rebecca Miller addresses personal family issues, such as the son born with Downs syndrome her father had with his third wife – her mother – photographer Inge Morath. Rebecca’s mother visited her son, while his father could not.

Incidentally, for many people unfamiliar with Inge Morath’s work, the documentary also celebrates her talent and independence. She had a hugely successful career as a photographer before she married Arthur Miller. Their marriage was happy and her spirit and strong personality infuses the film. Inge Morath died in January 2002, a devastating loss, which the playwright discuses in the film. (Arthur Miller died three years after his wife.)

The documentary reminds the public how Arthur’s Miller’s work went in and out of style in this country during his lifetime. He was aware of the vagaries of public taste and discusses this in the film. What he didn’t let on was how hurtful that must have been. He does say that his work is often more popular abroad. There is a clip of a Japanese production of “Death of a Salesman” to make this point, while also illustrating the play’s universal appeal.

“Arthur Miller: Writer” is one of the towering playwrights of the 20th-Century, but what most impressed me about this portrait of the man was his quiet humility and his journeyman approach to his work.

Last weekend I caught up with Rebecca Miller on the red carpet at the New York Film Festival screening of Noah Baumbach’s comedy, “The Meyerowitz Stories (New and Selected). She appears in the film as the daughter of a celebrated sculptor (Judd Hirsch), and her character becomes also a possible romantic possibility to a man whose marriage has just ended (Adam Sandler). I asked her about this acting detour and more important about her documentary and why she decided to bring it out now:

What inspired you to act in “The Meyerowitz Stories”?

It was really just because Noah is a friend and I love his movies. We had lunch and one day he was sort of looking at me a little funny. And by the end of the lunch I felt, ‘Uh, oh, now what?’ He said, ‘I think I have something for you to read.” I always said I would act again if it was in New York or wherever I happened to be and it was a friend and it was a few days work. It was all those things so I said yes.

I didn’t recognize you at first in this role. You’re hiding behind glasses and speak so softly. What was Noah’s direction?

Noah just wanted her to be really warm, to be somebody that was just a loving, warm person, who listened and in her own funny way said things that he (Sandler) needed to hear, you know? But she’s just a good person and then I just took my cue from that. It really was on the page, his writing is so good.

You’ve had this material for your documentary for many years obviously. What made you decide this was the right time for the film to come out?

I don’t really know. I know that at a certain point, about five years ago, I had so much material, it was over 200,000 feet of film, and it was really all over the place and it was in different storage facilities. I made the film with a lot of different producers and a lot of people helping me and I just felt if I didn’t do it, and also I had Damon Cardasis to help me, my producing partner, I figured if we didn’t do it now, I didn’t when I would have the energy. It just seemed the right moment.

The documentary will air March 16 on HBO and have a qualifying theatrical run.