Greta Gerwig is making her directing debut with “Lady Bird,” a sweetly funny coming-of-age film starring “Brooklyn” star Saoirse Ronan. She plays an angst-riddled 17 year-old in 2002 Sacramento, who dreams of escape to an East Coast college. Born Christine, this precocious and cynical teen insists on calling herself Lady Bird, to the annoyance of her mother (Laurie Metcalf), a no-nonsense woman who holds down two jobs and tries to talk common sense into her daughter. (Tracy Letts plays Lady Bird’s doting father, a depressive who has just lost his job.)

Lady Bird does typically teenage stuff, like hanging out with her pal Julie (terrific newcomer Beanie Feldstein) and getting her heart broken (Lucas Hedges and Tomothee Chalamet). She’s a decent kid with an occasional wild streak.

At the heart of the film is Lady Bird’s prickly relationship with her mother; they argue and bicker constantly about Lady Bird’s future and how to finance it. They disagree and reject each other’s views, but their love and attachment is deep.

“Lady Bird” is part of the New York Film Festival main slate of films and Greta Gerwig stopped by the Walter Reade Theater Friday afternoon to talk to journalists after the press screening.

Gerwig, who also wrote the screenplay, was asked how she first began developing the idea of the movie in her head:

“I’m constantly writing and I don’t know what pieces will become something. But what I do know is I have a draft, a very long draft, of this movie from the end of December 2013. So at least a couple of years… I don’t really decide what a core of a story is before I write. I write to figure out what the story is and I think the characters end up talking to you and telling you what they want to be doing and what’s important to them.”

About her two lead, Gerwg was asked if she always had Saoirse in mind to play Lady Bird:

“I didn’t have her in mind when I was writing but in 2015 I met her at the Toronto Film Festival and she read the script and she really responded to it. I was going to be there with ‘Maggie’s Plan’ and she was going to be there for ‘Brooklyn’ and we met and sat in her hotel room and she read all of Lady Bird’s lines and I read everybody else’s lines and I knew within the first two pages that she was Lady Bird and that she had the part. But then I just felt that she wanted to hear it all out loud,” said Gerwig.

“There was something about the way she did it that was instantly different than the way I heard it in my head and so much better, so much more unique and specific to her. And she had the quality of being always emotionally at a 10, which made it that much funnier…She never played the jokes with quotes around it. She always played it from the inside. And it made everything vivid in the way I always had hoped for but you just never know if you’re going to find that person whose going to be able to capture that, and she just instantly did it.”

About casting Laurie Metcalf, Gerwig said she of the veteran actor that she has always admired her work.

“She didn’t need to expend a lot of time going on about the character. In fact, she just said, I think that this is something I need to do. And sometimes things come into your life at the right moment and at that moment she told me, she said it publicly at the time,  ‘I have currently a 17-year old child who is trying to kill me.’”

To a question about whether the film is autobiographical:

“Nothing in the movie literally happened In my life but it has a core of truth that resonates with what I know,” said Gerwig. “I really wanted to make a movie that’s a reflection on home and what does home mean and how leaving home defined what it is for you and your love for it. And I felt like it was a love letter to Sacramento and I felt what better way to make a love letter than through somebody who wants to get out and then realizes they loved it. It felt like it was a movie framed around you follow this family, this world or these people and in a way it’s secretly the mother’s movie as much as Lady Bird’s movie.” 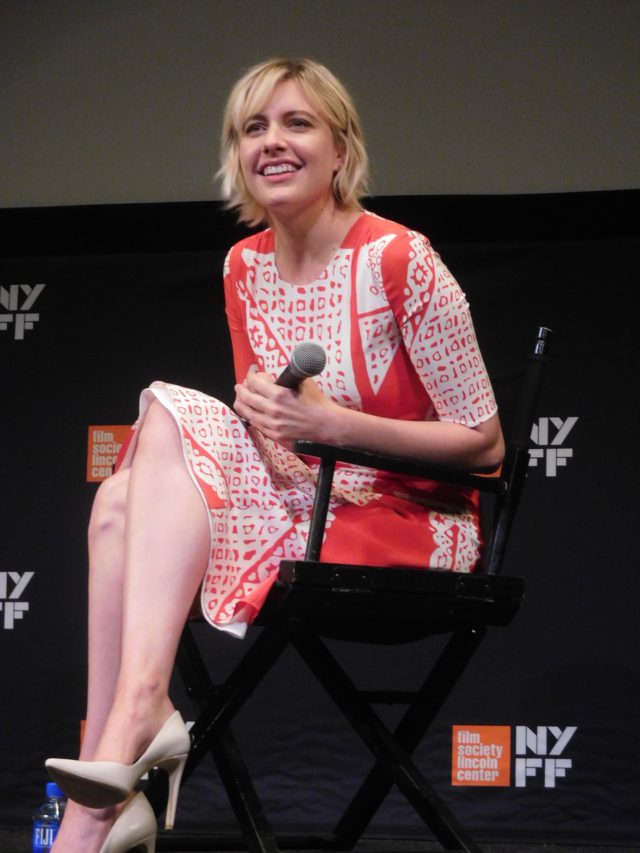