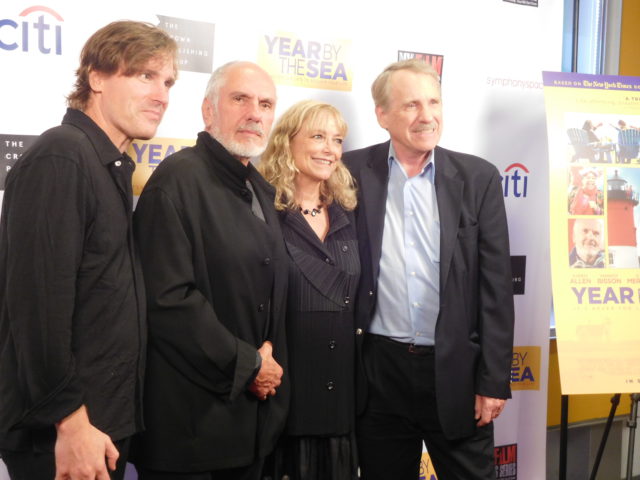 Karen Allen still has the freckles and sparkling eyes boomers remember from “Raiders of the Lost Ark” and “Animal House.” Thursday evening the actress turned up at a special New York Film Critics Series screening of her new film, “Year By the Sea,” at Symphony Space on Manhattan’s Upper West Side. Rolling Stone critic Peter Travers hosted the event and moderated a Q&A following the sold out showing.

Co-star Michael Cristofer, writer-director-composer Alexander Janko and author Joan Anderson also showed up to support the film and participate in the after screening talk.

Based on Joan Anderson’s bestseller, “A Year by the Sea: Thoughts of an Unfinished Woman,” the movie tells the story of an empty nester who has a moment of clarity about her life while peering in the mirror at her son’s wedding. She’s just discovered her husband (Cristofer) is selling their New York home and must relocate to Kansas for his job, and he expects her to follow.

During the Q&A, Allen said that moment early in the film also clarified her role.

“When I go into the bathroom at the wedding, and I find myself meeting my own eye in the mirror and there’s that moment where the mask, you know this mask, this almost inauthentic person that she’s become falls away for her, just a moment as she stands there. And she really comes into contact with this deep sadness that’s inside of her. And to me it’s like the crack in the egg.”

Instead of joining her husband to Wichita, her character embarks on a journey to reclaim her life and identity after 30 years as a wife and mother. She rents a cottage in Cape Cod, where her editor (the always terrific S. Epatha Merkerson) expects her to write a book, but where she first becomes immersed in the local scene, including finding a job with the sexy fishmonger (Yannick Bisson) and befriending a local free spirit (Celia Imrie from “The Best Marigold Hotel”) who opens her eyes to new possibilities.

Alexander Janko, after a successful career as a composer (“My Big Fat Greek Wedding”) is making his directing debut. During the Q&A Janko said the film came during a period in his life when he became disenchanted with his studio film composing career.

“And when Joan’s book found me — It was literally on the kitchen counter when I cracked it open — I realized I was at a juncture in my life where I needed to reclaim my life, to try to understand myself, to understand my mother, understand a dear friend’s mother in the fifth grade who disappeared for a year and nobody talked about it and then a year later she re-appeared. All this stuff came back to me as I was reading the book.”

Cristofer, currently in “Mr. Robot” and also a playwright (“The Shadow Box”) said he tried to add an element of empathy to his role, which could easily have been one-dimensional. “I did feel that somebody should play this part, and I was afraid he might turn out to be a bit of a monster so I stepped in to make him a sympathetic character.” He also understood his character’s reactions. “I sort of agreed with him when I first read the book…. I had all the reactions he had… Where is she going? Why is she going?… Why do I have to put up with this shit?”

To make the film producers embarked on a Kickstarter campaign and raised $3000 above their $50,000 goal.

As for how Allen became involved, during the Q&A she said she was sent the script.

“I no sooner put it down then I went running out the door to find the book, and I read the book the same afternoon because the script is so often more like an outline for the film. The book really flushed it out for me in the sense that I really got Joan’s thinking process and all of the details of her story and I was so moved by it.”

“After they asked me to do the film Joan and I got together and we spent about a three or four hour lunch where we just immediately took to each other.”

And yes “alcohol was involved,” Anderson said to a question from Travers, also noting that she was on set the entire 22 day shoot of the film.

Allen said she was inspired by Janko’s devotion to the film and to making it as authentic and true to the book as possible.

“I really felt the strength of his conviction to this particular story,” she said. “I was won over by the story, and I went in to meet him very, very hopeful. After we met, I left that meeting very, very hopeful that they would ask me to do the film. You know, being an actress of a certain age, there aren’t many good roles regardless whether it’s a studio or an independent film, where you get to explore a woman in this kind of transition. It wasn’t a hard sell.”