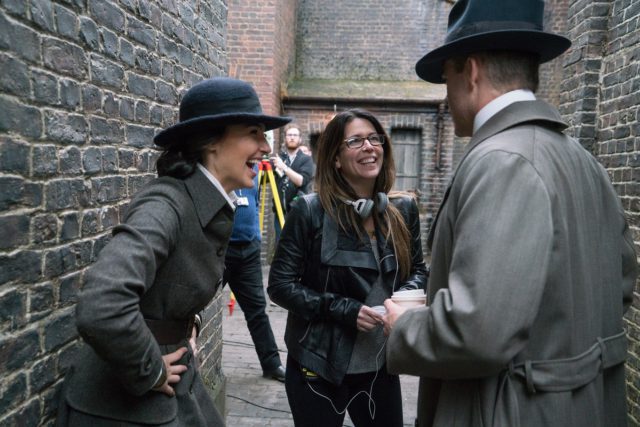 How can Warner Bros. NOT sign on Patty Jenkins to direct “Wonder Woman 2?” Is it possible? So far, it hasn’t happened. Of course, there has to be negotiations, but you would think they would roll out the red carpet and pour her a glass of champagne (very good champagne).

After all, she just directed the summer’s top grossing movie. To date (numbers rising daily), “Wonder Woman” has grossed an astounding $779 million dollars. That’s with a $149 million dollar budget. That seems pretty darn good to me.

To everyone’s delight, Gal Gadot will be back (nobody can replace her) in the lead role. Hopefully, by movie magic, Chris Pine will be back in some capacity (please – the romance was just beginning), and we all would love to see Diana return to Themyscira to see her mother, the wonderful Connie Nielsen. Yes, that might be a stretch, but who knows, anything can happen in the movies!

But who took this project on and put her heart and soul into it? Patty Jenkins did. As Chris Pine conveyed in an interview, she pretty much acted out the entire movie while directing her actors (in a good way). It was obvious in watching the movie and listening to Patty’s interviews that she cared deeply about the project, and directing a movie about a female superhero – the one and only “Wonder Woman.”

Along with great enthusiasm for the project, Patty also stayed true to the story’s integrity and Diana’s origin. I don’t want to get too deep. After all, it is a superhero movie. But really, it was wonderful, and Patty has shown that she is a top notch director.

Some of the male directors from the DC movies have earned $10 million to $20 million.  “Wonder Woman” is the top grossing female-directed movie ever, and is climbing quickly up the DC ladder.

Come on, Warner Bros.! Give the gal her due. Give her a nice big contract for “Wonder Woman 2.” She really deserves it.

Who thinks Patty Jenkins deserves to come back and get a nice pay raise?