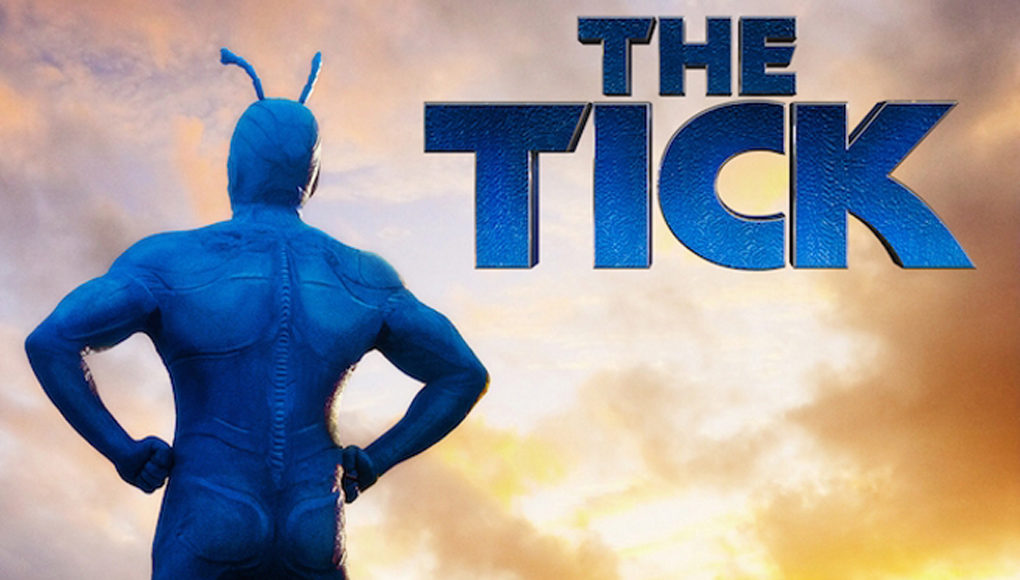 Amazon Prime’s new take on “The Tick” premieres for streaming on Aug. 25, 2017, although you can watch episode 1 now. With the hilarious Peter Serafinowicz as the Tick and Griffin Newman as Arthur Everest, it’s a must-see. I’m tired of superhero stories, but this funny and well-done send-up of the genre is refreshing.

The cast and creator Ben Edlund gathered in New York recently to talk with journalists about the show. What we discovered is that all of them are as funny unscripted as they are on screen, especially Peter, who is a master of voices and accents.

Peter Serafinowicz and Griffin Newman on the voice Peter created for the character of the Tick:

Peter: Ben [Edlund] described it to me as a kind of American radio announcer from the 1970s, and that’s a voice I’ve always loved doing, since I was a kid watching Sesame Street and being in love with all that. That’s a thing that me and Griffin share, actually. We love that side of American culture. We’re both big fans of Mad Magazine and a lot of shows from…

Peter: For different reasons, we have a lot of similar frames of reference.

Peter on the antennae he wears that appear to move on their own:

The guy who designed them referred to them as antlers, which they are most certainly not! But they are attached to my head. Underneath the already quite bulky helmet piece of the costume is another hard plastic skullcap, which is clamped to my skull [laughter] and tightened and contains these metal things that can move at 360 degrees. 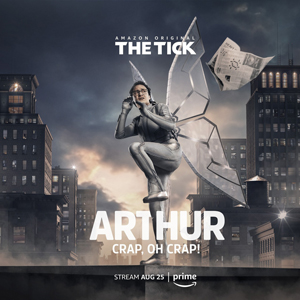 Peter and Griffin on the woman who controls the Tick’s antennae:

Peter: Her name’s Lars, and she’s a Jim Henson puppeteer. And she also talks [raising his voice very high] like she’s a muppet.

Griffin: You have no idea how accurate that is.

Griffin: She owns it. She definitely plays it up.

Griffin: I can see what she’s doing, but Peter can’t…. The thing I said to Lars a week or two in is, “It’s almost like you’re the punctuation on every one of his lines. You get to choose whether it’s an exclamation point, a question mark, or an ellipses or whatever it is.” But you’re [Peter] entrusting a lot of your performance…it’s like you’re letting someone control one of your limbs.

Griffin and Peter on whether Griffin was a fan of “The Tick” before getting cast in the show:

Griffin: I was a big fan. I got in through the Warburton show [the first live action incarnation of “The Tick.”] My mother was very over-protective [when I was] growing up, so I wasn’t allowed to watch the cartoon show. At the time, she also wouldn’t let me watch “Rugrats” because she thought it was too sarcastic. That’s how low the bar was. It’s a big reason that Peter and I have so many common reference points for pop culture is that I couldn’t watch anything pretty much made after 1976. So I was very out of lock step with my generation. [laughter]

But I always loved superheroes from afar. They were like the forbidden fruit that I wasn’t allowed to engage in. That’s why [when I was] maybe 9 or 10 and could walk to the comic book store by myself or watch TV when my mother wasn’t home, I got really, really into superhero culture. And that’s about when the Warburton show was on, and it was one of the first live action superhero things of that generation. The first Spiderman movie hadn’t even come out yet….

Peter: Griffin, you know that all that was a total lie. [laughter]

Ben Edlund and David Fury on this new incarnation of “The Tick”:

Ben: “The Tick” has a very interesting existence. It’s been a 30-year multidimensional presence that this thing’s had. It’s sort of beyond imagining that we’re doing another live action show with as much backing as we’re getting from Amazon and as much reception as we’ve received from the fans. So I’m very excited.

David: This is a very different version of “The Tick” in that it’s serialized; it’s a half hour. We’re able to tell a much larger story, one that has a larger scope…. Amazon wants us to go big and to think big and think outside the box. Networks generally go, “Keep inside this box. If you go too far outside, people won’t watch.” And Amazon says, “Just do everything that comes out of Ben’s head.” That’s what we essentially try to do.

Yara Martinez and Jackie Earle Haley on the character of Ms. Lint:

Yara: I didn’t know that I was going to be in it to this extent until I ran into Ben at a party, and he was just super-excited. He was like, “Oh, my God! So I have her back story. She’s electric. She’s like an electric eel, and she shocks people. And her eye pops out, and things backfire. And all the lint gets back on her. And that’s why she’s Ms. Lint.” And I was like “Awesome.”

Jackie: What have you been smoking, Ben? [laughter]

Yara and Jackie on their characters’ strange eyes:

Yara: It’s actually a contact lens, and they designed it for my eye. So there was actually someone on set, Zach, that his purpose was to take off and put on our contact lenses. Jackie as well.

Yara: I couldn’t see anything. After long days, it was really exhausting not to be able to have full vision. And I had to be really careful walking around the set…. That was the funny thing, too, when I was acting across from people, they didn’t know which eye to look into.

Jackie on what he thinks of this version of “The Tick”:

I think this is his [Ben’s] most sophisticated version. It’s the one with the strongest arcs. The one with the biggest budget…. I think this now is the first version that it’s not a comic book parody. It’s not a cartoon. It’s now kind of campy, live action fun. Now, it’s a comic book movie parody. And Amazon gave us this cool budget and creative freedom to look like a quality superhero movie and yet, be just funny as sh**.

Valorie Curry and Brendan Hines on what drew them to take their roles on “The Tick”:

Valorie: Look, I mean, I think the truth always has to be said before everything else, which is that actors like to work on things that pay them. So there’s always that. “Yeah, that’s a job. I’m drawn to that! I have rent to pay.” But for me… I was really excited to work on a comedy. I’ve spent most of my career doing really dark, intense stuff….

Brendan: Same here…. I was very excited to do a comedy and had been trying to do one for a bit. And this coincided really nicely because I was a big fan of the cartoon, and I’m also a big fan of getting to say very cleverly constructed, sort of linguistically stylized word jokes, word salads that end in punch lines. I just love that, and Ben’s brain does that very, very well….

It’s so fun to be able to not just be in a comedy but a really smart comedy that also is a pretty kind-hearted comedy. So those are all things that were very exciting for me. And also, I think I’m approaching the time at which I was about to start aging out of being able to play a superhero, so I think I made it in just under the wire.

Michael Cerveris on whether it’s fun to play an evil character:

I play Ramses, and yes, it’s fun to play such evil. Basically, I just get to finally do something productive with my natural evilness and get paid for it. [laughter]

Scott Speiser on the character of Overkill:

He’s so angry and just so fed up and so vengeful and frustrated. He has no patience or tolerance for anyone around him…. His name is Overkill. Yet, for him, there’s no such thing as overkill. He could kill until he needs to take a break.