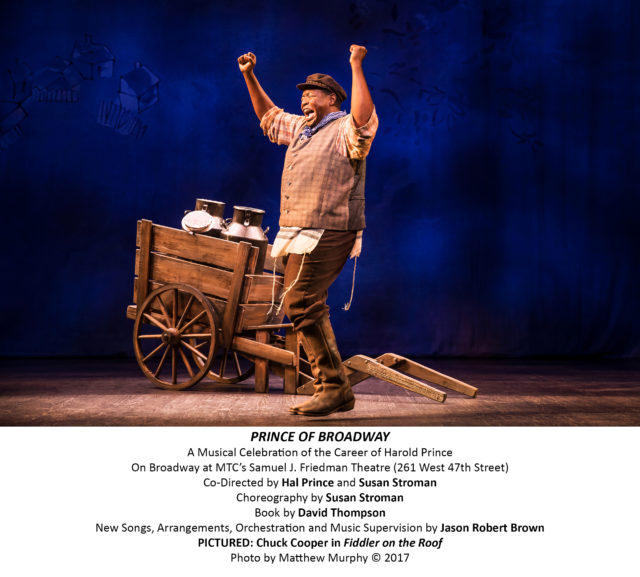 There have been many Broadway hits, and even eight consecutive flops, for the legendary director-producer Hal Prince, but it’s mainly the hits that are gloriously celebrated in “Prince of Broadway,” which opened last night at the Samuel J. Friedman Theater.

It’s a gift nowadays to hear an actually orchestra play an overture, but then add to that the illustrious compositions by Bernstein, Sondheim, Andrew Lloyd Webber, John Kander and Cy Coleman, just to mention a few, and it’s like being in musical theater heaven.

The first rate cast comprised of Emily Skinner, Chuck Cooper, Tony Yazbek, Karen Ziemba, Brandon Uranowitz, Kaley Ann Voorhees, Michael Xavier, Bryonha Marie Parham and Janet Dacal perform a dizzying confection of classic tunes, including from supernovas like “Cabaret,” “Phantom of the Opera,” “Evita,” “Company,” “Damn Yankees,” “The Ballad of Sweeney Todd” and Fiddler on the Roof,” as well as some of the nearly forgotten songs from flops like “It’s a Bird… It’s a Plane… It’s Superman” (1966). (One thing we learn is that the music of Stephen Sondheim, that other Mount Rushmore of theater legends, stands up much better than that of Andrew Lloyd Webber, which is perhaps no news flash.)

But what connects all these musicals is Prince, who directed and produced — and in some cases both — all of them on Broadway. Mr. Prince also co-directed, at age 89, this production with Susan Stroman, who also choreographed the show.

The sets are recreated from the original shows and during the curtain call, when a spry and very sharp Mr. Prince was brought out front by Karen Ziemba to a standing ovation, he told the audience that if they came to see the show again they should look closely because the sets are signed by the original designers.

David Thompson wrote the script, which has the performers take turns pretending to be Mr. Prince, while they deliver maxims about theater success and failure and the necessity to work hard. (At times this can be a little confusing.) We know they are all versions of Mr. Prince because they wear glasses perched on their head, one of Mr. Prince’s signatures.

There are many stand-out numbers from the show. My favorites include Tony Yazbek singing (beautifully) “The Right Girl,” from “Follies,” (choreographed by Stroman) in an athletic and artistic turn that channels Gene Kelly.

Chuck Cooper has been in 14 Broadway shows, but somehow the veteran middle-aged performer seems like a sensational new discovery. He’s terrific as Tevye the Milkman singing “If I Were a Rich Man” from “Fiddler on the Roof,” with just the right amount of growls and hip shaking. He may be the first black Tevye, which made the audience laugh at times, but his performance is so touching and gorgeously sung that you just want to see him do the whole show. Mr. Cooper was fabulous again performing songs from “Sweeney Todd,” where he shared the stage with Ms. Ziemba, who as Mrs. Lovett did a terrific rendition of “The Worst Pies in London.” Please give this man his own show!

Emily Skinner took on “Ladies Who Lunch,” from “Company,” and although it was impossible not to think of Elaine Stritch, Ms. Skinner delivered such a nuanced and powerhouse performance she made the song her own (almost).

The opening night crowd was theater royalty, beginning with Carol Burnett, who sat with Mr. Prince’s family, and had the entire audience straining their necks to get a look. And then there was Chita Rivera, the original Spider Woman, who looked fantastic. Other theater luminaries included Jason Alexander, Tommy Tune, Len Cariou, Joel Grey, John Patrick Shanley, Billy Porter and Stephanie J. Block.

For anyone who knows their musical theater history, it was poignant to see Mr. Cariou, the original Sweeney Todd, in the audience.

And Joel Grey of course was the original emcee in both the theater production of “Cabaret” and the movie version, for which he won the Academy Award in 1973. Mr. Grey sat only two seats away from me and I wondered what he was thinking as he saw his signature songs “Willkommen” and “If You Could See Her,” now performed by the Brandon Uranowitz.

The after party was at the Bryant Park Grill and the real thrill was watching Carol Burnett and Joel Grey hang out with Mr. Prince, who was the life of the party.

The Manhattan Theater production of “Prince of Broadway,” a gift to all musical theater lovers, runs through October. 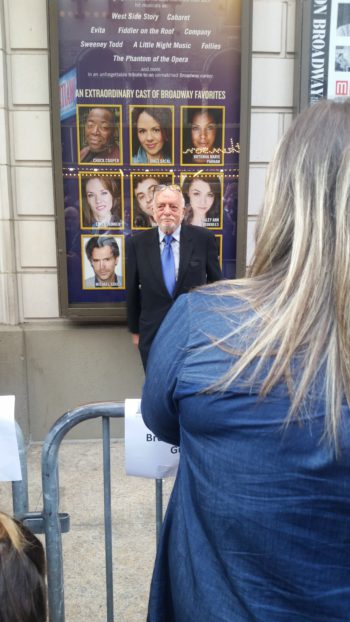 (Photo by Lani Abbott of Mr. Prince standing in front of the marquee opening night, his glasses perched on his head.) 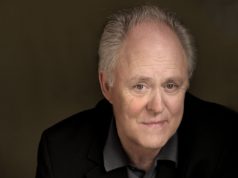 John Lithgow Will Tell ‘Stories By Heart’ on Broadway