The cast, creator, and producers of Amazon’s series, “The Last Tycoon,” gathered in New York this week to talk about the show. I’ve seen the entire season, and I recommend it highly. The full season (nine hour-long episodes including the previously released pilot) will be available for streaming on Amazon Prime on Friday, July 28, 2017.

Matt Bomer plays Monroe Stahr, a 1930s movie producer wunderkind, and Kelsey Grammer plays Pat Brady, the head of the studio. Lily Collins plays Brady’s daughter, and Dominique McElligott plays Stahr’s love interest. The show is based on the book of the same name by F. Scott Fitzgerald, a novel that he left unfinished when he died.

Billy Ray, writer of “The Hunger Games,” “Captain Phillips,” and “Flightplan,” created the show, serves as head writer, and directed three episodes. He has planned for at least five seasons if green-lighted by Amazon. Producer Christopher Keyser was also on hand to answer questions about the show. 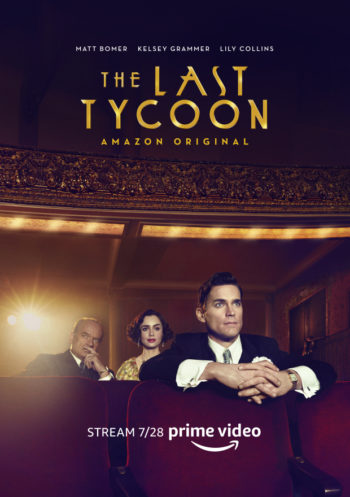 Below are some highlights from the interviews:

Matt Bomer on “living” in the 1930s while shooting the show:

I think actually we filmed the Oscars in the same room they filmed it in in 1936. We shot on the old United Artists lot where they shot “Flightplan,” the first movie I ever did that Billy Ray wrote, but also “The Little Foxes” and “Dodsworth” that year. So there were a lot of old ghosts around, I feel like, but yeah, they did create a really immersive environment because of their talent.

There were days when it was kind of like gymnastics. I would start a scene with an emotional confession to you [Dominique McElligott]. Then, we’d have a love scene. Then, I’d have a fight with Pat Brady. Then, you had to go repeat the whole thing the next day. But that’s part of, I think, what’s exciting about the medium of episodic [television] is that you don’t get to luxuriate in anything for too long. So it’s perfect for we of the short attention span.

Matt on how the fast shoot for “The Last Tycoon” compares with the shooting schedule of “White Collar”:

“White Collar” was – we did an episode in seven days, and we shot 60-something-page scripts that would get whittled down. And for the first three seasons, we got our revisions the morning of, and I’d have monologues about art history. I’d just be flying by the seat of my pants. But I think it was great training and a good way to prepare for other things.

Matt on how much he based Monroe Stahr on Irving Thalberg, the real-life 1930s movie producer that Fitzgerald based Stahr on in the book:

During the pilot, quite a bit. And then, it came as a complete surprise to me when they decided to make him [Thalberg] a character in the show. So we’re freeing ourselves up from that mythology! Throw that out the window! But I think it was actually a really smart call from them because we were able to part ways and not be tied to just Irving’s story, incredible and parallel as it was. So, yeah, a lot of research. I read that huge tome on him and watched a lot of his films. Then, it really just became about Billy’s vision.

Matt on losing weight for the character of Monroe Stahr and keeping the weight off between shooting the pilot and the rest of the season:

I was like, “Listen, ya’ll, I love ya, but I can’t be 20 pounds down for six months. Daddy needs a hamburger every once in a while.”

Dominique McElligott on what she loves the most about the scripts for “The Last Tycoon”:

I liked the romantic aspects. I liked the hand-holding and the fact that we didn’t kiss on the first date and all that aspect of it. The building of the tension and the formality of intimacy with another person. The courting and the wooing and all of that that goes with it. The old school style dating world. I really loved that aspect of it because I guess maybe I’m old school myself. I loved that. That’s romance.

Lily Collins on whether her parents (musician Phil Collins is her father) were unhappy about her choice to go into the entertainment business, like her fictional father Pat Brady in “The Last Tycoon”:

I definitely have had conversations with both my parents about the industry and about my choice to be in it and the pros and cons. In this situation, though [on the show], we both are in the exact same industry, whereas in mine [real life], it’s music and films. It’s a little different.

But I grew up with a mom who is obsessed with old Hollywood. And I grew up literally running around the hallways of Greystone Mansion because my mom helped preserve it. So the fact that then one day, I would be filming there as the Brady household was very strange.

Kelsey Grammer on his character’s disapproval of his daughter’s decision to go into the movie business:

In our situation, the relationship between Pat and his daughter, he has good cause to think you are asking for a world of hurt. A horrible way to make a living. Awful people around you…. He even thinks he’s one of the awful people.

The key for my guy [Pat Brady] was just this little blurb I read about Harry Cohn in the book “Citizen Kohn” where he said he loved gangster movies because he fancied himself a bit of a gangster. So I thought, “Maybe I’ll make him talk a little bit like a gangster.” It’s very subtle…. He’s [Pat Brady] a son of a bitch if you cross him, and he’s a pretty great guy if you don’t.

Kelsey on the TV and movie industry:

The industry to me is something I avoid. I’m successful within the context of the industry, but I’m not a prick. And I’m not really interested in being one or in playing any kind of games. I like to tell a good story and be part of something that’s good. If it can’t be that, you just do your best and you leave. You move on. I like my life at home, my children. I want to do this [work in the industry] and that [spend time at home with family].

Billy Ray on the characters in “The Last Tycoon”:

It’s not a coincidence that they run into each other in a cardiologist’s office. They pay a price for the job. It takes something out of you in a way that can’t actually be fixed. And everyone in the show is completely aware of the price they are paying on a physical, spiritual, metaphysical level, and they keep paying it.

Billy Ray and Christopher Keyser on the Monroe Stahr character:

Billy: Monroe is trying to fill an unfillable hole in a lot of ways on a professional level. Because he thinks he’s going to die young, he thinks he has to make this one perfect piece of art….

Christopher: There’s something a little creepy about Monroe Stahr.

Billy: No, there isn’t! [Laughter]

Kelsey has the ability to play tremendous affection for Monroe even when he’s furious at him. You never lose that twinkle in the back of his eye that he loves Monroe. It’s very paternal. And there’s a gratitude there even as there is a frustration that he is, as the show says, he’s not the hero of his own life story. And what that does to a person. But he never loses that affection.

Billy on how much of Fitzgerald’s writing makes it into the scripts:

We both keep a bin in our computer of great moments from the book and great lines from the book that we try to steal where appropriate. I’m really happy to report that sometimes, even we can’t remember whether it’s a Fitzgerald line or a line from us because we’ve tried so hard to keep a consistent tone.

Billy on the tone and look of the show:

We felt very strongly that the show was about the power that the dream has on everybody in Hollywood. They’re all chasing something that is so elusive and so romantic and so intoxicating. And they’re all so compelled by the pursuit of that dream. If you’re going to do that, you’d better shoot it in a dreamlike way. You’d better make sure that dreams looks beautiful.