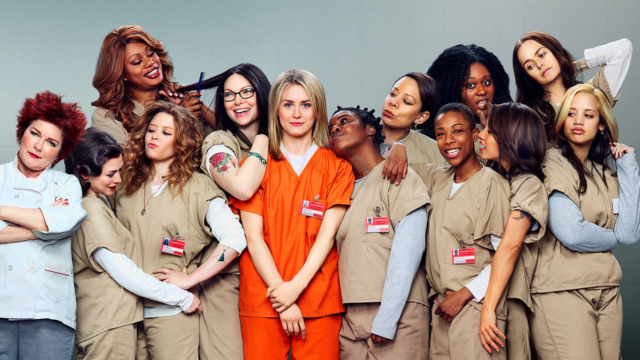 In April, Netflix released a new trailer for the acclaimed series “Orange is the New Black,” a series which has been garnered praise for its diversity in storytelling and casting, and it’s critical focus on a number of social issues that activists are concerned with today.

The series has closely followed Piper Chapman and her fellow inmates who are serving sentences in a minimum-security federal prison. Each episode exposes viewers to the very real human lives behind harsh and sometimes inhumane convictions and allows viewers to see firsthand the ways that various systems might disproportionately affect or even fail female inmates–although many have argued that the show disproportionately places an undue amount of trauma on Black women.

The show and its popularity reflect an increased public awareness surrounding the issues that come with mass incarceration, and the ways that this systemic issue disproportionately affect poor communities and especially communities of color. And it’s an issue that directly reflects the realities of the U.S. today, especially for women. These are problems which can drastically change through criminal justice reform.

Over the past 25 years, women have faced a significant increase in incarceration rates, as poverty-related crimes and nonviolent drug offenses have translated into lifelong sentences for many.

According to the American Civil Liberties Union, there are more than 8 times as many women incarcerated in state and federal prisons and jails than there were in 1980–many of whom were the victim of the Clinton administration’s widely criticized “War On Drugs.”

In fact, the ACLU estimates that nearly 40 percent of the criminal convictions for women that  took place in the 2000s have occurred because of nonviolent, drug-related offenses. Despite this, their sentencing is often far too heavy handed.

Despite the fact that women’s incarceration has reached an all time high, women continue to be forgotten when it comes to criminal justice reform in the United States.

Emily Salisbury, a professor of Criminal Justice at the University Nevada, Las Vegas, argues that while women remain a marginal seven percent of the total prison population, that is precisely why they need to be focused on.

Making her case during a TedX event, Salisbury argued that the crimes committed by women are generally related to socioeconomic issues such as addiction, poverty, and lack of access to social safety nets. By focusing on their rehabilitation, she contended, the U.S. could potentially help curb the country’s significant overcrowding problem.

For many others involved in criminal justice reform, this sentiment is popular, but they recognize that reform is not particularly easy to establish universally in the U.S.

“Women are often overlooked because on the surface, they make up a small part of the criminal justice puzzle,” Boston University Criminal Justice professor Dr. Danielle Rosseau writes. “In reality though, women’s experience in the criminal justice system has an immense effect on future generations of our society. The incarceration of women has an immediate and systemic involvement from one generation to the next. We need alternative pathways and examples. We need trauma-informed approaches that are intergenerational.”

Still, many experts wonder how exactly the U.S. might be able to enact change on a large scale level. Many are calling for rehabilitation for nonviolent offenders, which in order to be successful are highly dependent on individual circumstances. Many of these women will require support to help them handle and overcome PTSD, trauma, addiction, and  cyclical poverty.

There are a number of communities that have put forth efforts to change the criminal justice system as it currently stands.

In Cincinnati, police partnered with the University of Cincinnati’s Criminal Justice Department to help create partnerships within the community in order to reduce police-on-citizen violence, maintain better community-police relationships, which was a powerful initiative in a community where people of color are disproportionately targeted by police. Through this partnership, police and academics made significant steps forward and managed to improve community relations by offering offenders access to education and employment, therefore minimizing the crime rate.

Though not woman-centric, this partnership has made many feel that Cincinnati is much further ahead of the curb when it comes to improving community relations with police.

“I wouldn’t go back for nothing,” one Cincinnati community member and former drug dealer Donte Ingram told NPR in 2009. “The worst thing I have to worry about [now] is if I’ve got my seatbelt on or not.”

That’s not to say that other, more gender-specific programs haven’t been successful in other areas of the country. In New York, the Women’s Prison Association, a group that has been advocating on behalf of female offenders for over 150 years, recently created a program that takes punitive punishment out of the equation for women who have committed nonviolent offenses, instead offering women the social support they need.

Known formally as New York’s Justice Home, the program aims to help women who are facing a minimum six months of time in prison undergoing felony charges. The program offers individual assistance to women and families, assessing individual needs in order to connect them with services they need in order to raise their families and prevent cyclical incarceration and poverty.

The needs vary from family to family, but each of the women have opportunities to receive monthly home visits, ensuring that they are in a safe and abuse-free environment. Others receive cash assistance, food stamps, housing vouchers, counseling sessions, and other mental health services.

“Our focus is to get these women back on their feet by addressing the underlying causes of their criminal behavior,” Georgia Lerner, executive director of the WPA tells The Guardian. “We’ve learned over the years that so many of the reasons women get into trouble are things that can be cured with services.”

The good news is that many of the women in these programs are successful. When the story was last covered in 2015, 40 women had completed the program, saving taxpayers thousands of dollars. One prison bed in New York costs a minimum of $60,000 per person per year. In comparison, providing women with these necessary social services costs a mere $15,000 per person annually.

The criminal justice system has been a major point of discussion for both scholars and community members for a long time, and many agree that reform is necessary, not only to save taxpayer money, but also to heal communities and make sure that these individuals can heal from situations that may have been out of their control in the first place.

The experience that many women face is visible through the lense that OITNB uses. By looking through an intersectional lense, the show’s creators have highlighted many circumstances through which women, and especially women of color, deal with incarceration. Their experience is focused through a lense where many who were previously unaware of those women’s experience may gain understanding and acceptance.

Moving forward, an emphasis on these intersecting identities and the struggles they face is necessary in creating law enforcement branches that are willing to listen to and help these communities.