The second season of Aziz Ansari’s “Master of None” is storytelling genius. In my favorite scenes, midway through the second season, the show pays tribute to New York. Entitled, “New York, I Love You,” there’s an engrossing series of seemingly unrelated vignettes, including a scene where a deaf woman (deaf actor Treshelle Edmond) argues with her boyfriend over bedroom issues and a testy tax driver from Rwanda (Enock Ntekereze) resists listening to customers who divulge movie spoilers. Ansari barely appears in these segments so that for a nanosecond I wondered if I was even watching his show.
Ansari and co-creator Alan Yang have crafted some beautiful realized scenes that capture the rhythms of the city and seem inspired by Vittorio De Sica’s neo-realist cinematic style. (I read that before filming the second season he watched many of the Italian director’s films.)

If you haven’t caught the second episode “Master of None” yet this is a perfect time to binge the entire season, the best way to appreciate how well written and acted the show is. “Master of None” is also a foodie’s delight, with much of the early scenes, which were shot in Italy, focusing on the culinary specialities of the region.

A special screening and panel of “Master of None” took place Monday, June 5 at the Saban Media Center at the TV Academy in North Hollywood. 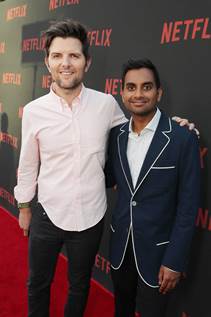