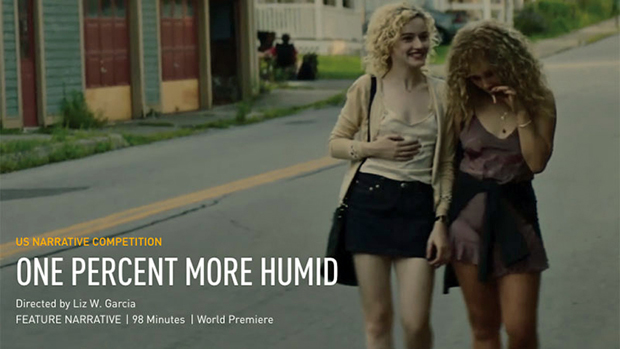 Liz W. Garcia’s feature, “One Percent More Humid,” won Alessandro Nivola a Best Actor Award at this year’s Tribeca Film Festival, but the true stars of the film are young actresses Juno Temple and Julia Garner. Don’t get me wrong – I’m a huge fan of Nivola and have seen him on stage twice. He turns in a fine performance in this film worthy of his award.

But this movie is really about the girls during a hot and humid summer in an upstate New York college town. They’re about 21 years old and struggling to cope with the tragic death of a friend a few months before the setting of the film. Unfortunately, neither girl is coping well, although it appears the adults affected aren’t coping so well either.

Each girl turns to sex to try to numb her feelings, and that’s where Nivola comes in. He plays a 40-year-old English professor whose job has forced him to live apart from his wife during the week. He also appears to be going through a bit of a midlife crisis. When he begins to work with one of the girls on her thesis – a series of poems about grief – the two fall into a forbidden affair.

The title “One Percent More Humid” comes from a line in the film in which one of the girls says if the humidity were even one percent higher, they would all drown. I assume this is a reference to just how close each of the girls feels to drowning emotionally after the trauma they’ve experienced.

This is an indie film, so there’s no grand ending here. But the girls, as well as Nivola’s character, do go through an evolution that’s believable and poignant.

Sometimes, the use of blur in the cinematography is distracting, but the acting and direction across the board are excellent in this coming of age drama.