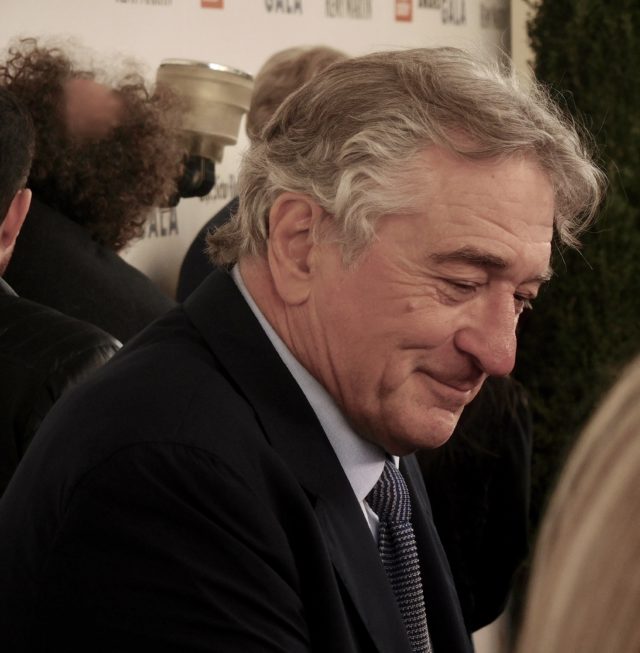 Robert De Niro received the prestigious Chaplin Award for Lifetime Achievement Monday eventing from the Film Society of Lincoln Center at their annual gala at the Koch Theater. While he received the award he blasted Trump for his governmental cuts to the arts. (Previous recipients of the honor include Tom Hanks, Morgan Freeman, Robert Redford, Michael Douglas and Barbra Streisand.)

“I feel really honored to receive this,” he told journalists on the red carpet in a monotone. De Niro rarely speaks on red carpets and this must have been torture for him. By the time he got to me he sighed, “I’m really happy now because I’m nearly at the end of the line.” At this point there were only two more journalists to speak to, including legendary gossip maven Cindy Adams.

When I asked him about his process and how he found his way into a role, he cleared his throat and threw in the towel. “I don’t know. It’s too complicated. These questions are too hard.”

De Niro perked up when I asked him if he’d been following the Senate subcommittee hearings about Michael T. Flynn and Russian interference in the elections. “Yes, I have,” he told me.

Does he think Trump could be impeached? “I would love for him to be impeached,” De Niro told me. “I think we all would. Well, certain people would.”

He looked over at Cindy Adams who was making clucking noises. She said “Donald Trump was her friend” and she wished “people would leave him alone.”

“I think he’s just overstepped every boundary, every line of decency,” said De Niro of Trump, adding, “Even at this point I’d give him credit for anything he could do that’s good. But he’s’ not changed one inch, one bit, he’s just the same.”

At least Trump hasn’t called him an over-rated actor I noted.

“I don’t give a shit what Trump says,” De Niro snapped, looking at Cindy Adams he taunted, “Your friend, Trump The Chump!”

Adams ribbed him back. “He wants to have coffee with you.”

“That’s not likely to happen,” De Niro shot back.

“He’s a disgrace to this country,” De Niro turned back to me to add the final salvo.

At that moment Harvey Keitel, standing nearby, called out to De Niro: “Are you saying nice things about me?” Because I’m saying them about you.” 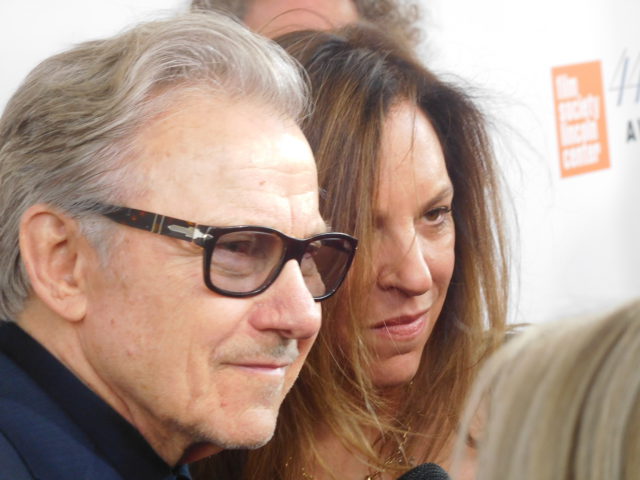 Then someone asked Harvey who picks up the check when he and De Niro go out to dinner.  “I want to hear this,” Adams said.

“Who picks up the check, Robert?” Harvey asked before answering his question: “I picked up the last one.”
Speakers who lavished praise on De Niro during the gala included Douglas, Whoopi Goldberg, Keitel, Sean Penn, Barry Levinson, Ben Stiller, Mary Streep and, of course, Martin Scorsese who handed De Niro the glass award. 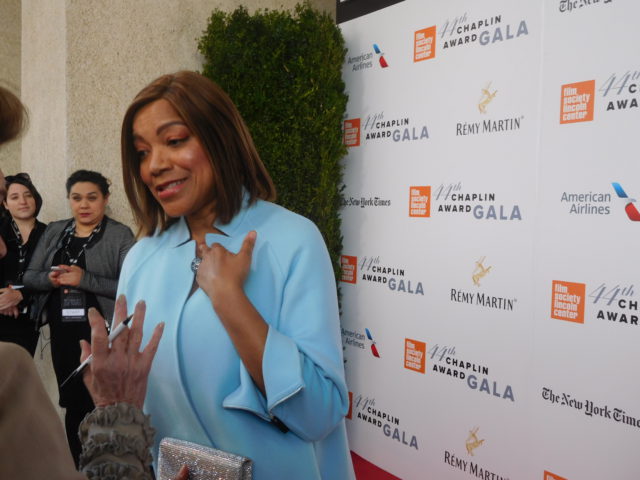 De Niro’s wife Grace and the rest of his family was with him, seated in a box above the stage. His little granddaughter, who was adorable and wore braids, sat on his lap most of the evening, a little restless — there were many speakers and many clips shown, from the beginning of his career (“Taxi Driver”) to the late comedies (“The Intern”) to his new HBO special, “The Wizard of Lies,” directed by Barry Levinson.

Some highlights from the speeches:

Whoopi Goldberg: “Of the people I wanted to work with, he was number one…. I found out something — and I’m not going to lie — I saw in magazines, the rags, that he liked the sistahs…That was beneficial to someone who looked like me because when I finally got to Hollywood and people sort of talked about how I looked… I could say, well De Niro likes me… That’s not a piece of information you’re going to get from a lot of people tonight.” 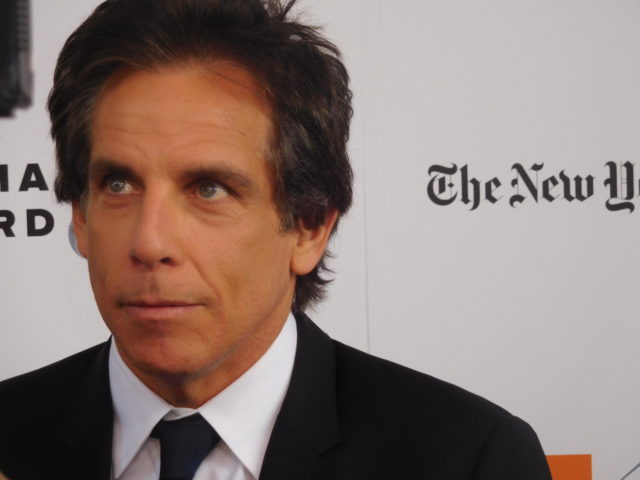 Ben Stiller, who came to the stage after Sean Penn’s heartfelt but very dry speech, joked, “Sorry, Sean Penn told all my jokes… I am glad that the Film Society finally feels he’s worthy. He was supposed to receive this back in 2000 but then ‘Rocky and Bullwinkle’ came out and they had to wait until enough board members had died… Working with him on ‘Meet the Parents’ was one of the highlights of my life. And then knowing him as a friend is something I never dreamed would happen. He assured me it won’t.”
Meryl Streep: “When he is asked about the source of his work and genius in discovering and delivering some of the most indelible characters in cinema history, his answer is remarkably consistent.” Streep rolled her eyes, sighed, and made a strangulated sound, much like De Niro had done earlier on the red carpet.

Scorsese, who spoke for nearly 11 minutes, said, “I hope we’ll do a couple more pictures together, beginning in a few weeks.” (They’re beginning “The Irishman” and De Niro plays the title character.)

De Niro’s acceptance speech was nearly six minutes and he took much of that time to blast Trump, especially for his government’s defunding of the arts. 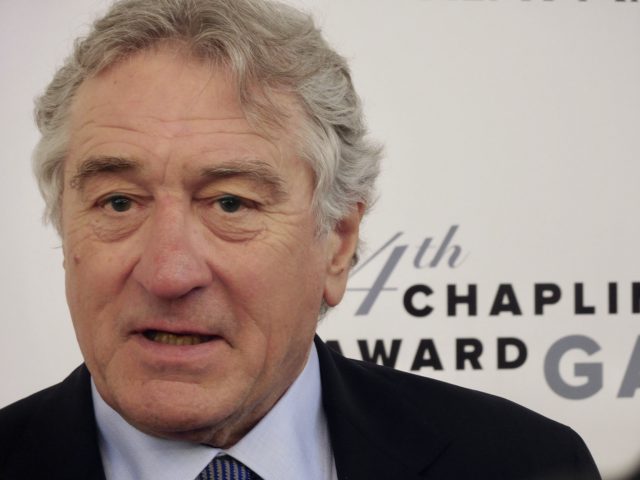 “We make movies to entertain audience. Audiences go by seeing them. Critics write about them. Then posterity takes its time to decide if they’re art or not,” said De Niro. “I’ve been thinking about this a lot mainly because of our government’s hostility towards arts. For their own divisive political purposes the administration suggests that the money to these all inclusive programs goes to rich, liberal elites. This is what they call an alternative fact. I call it what it is, bullshit.”

De Niro told the audience that by being there they were supporting arts for everyone. “You are supporting the slapstick of Charlie Chaplin, the great body of work of Marty Scorsese and Barry Levinson, the dumbass comedies of Robert De Niro, the over-rated performances of Meryl Streep.”
The 73-year-old honoree blasted Trump’s administration and called financial cuts to arts  “mean spirited” and that people “deserve to have a fair tax system, a safe environment and health care for all.”

“I don’t make movies for rich, liberal elites,” said De Niro. “I’ve got my restaurants for that.” 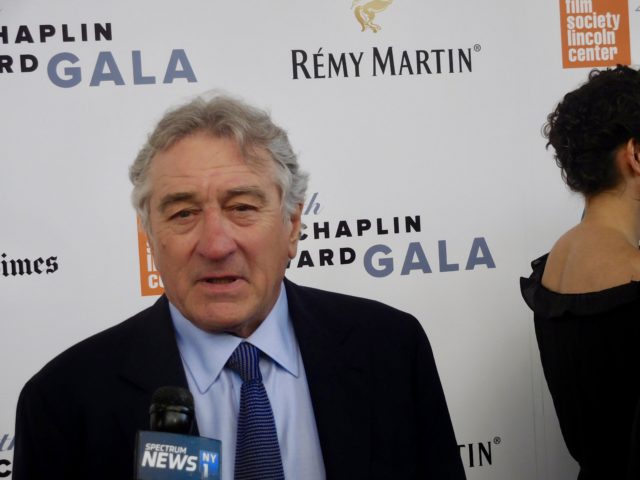 Finally De Niro said everyone who makes and loves movies “owes a debt to Charlie Chaplin, an immigrant who probably wouldn’t pass today’s extreme vetting. I hope we’re not keeping out the next Chaplin.”

De Niro ended his six-minute speech professing his love for Manhattan. “Finally, I love Hollywood. But what makes this award so special is that it’s in New York,” he said. “For the movies Hollywood is a place, an industry and a state of mind. But New York, New York is home.” 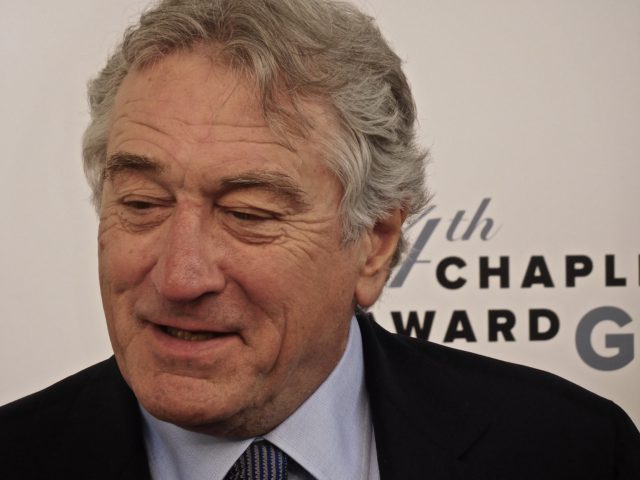