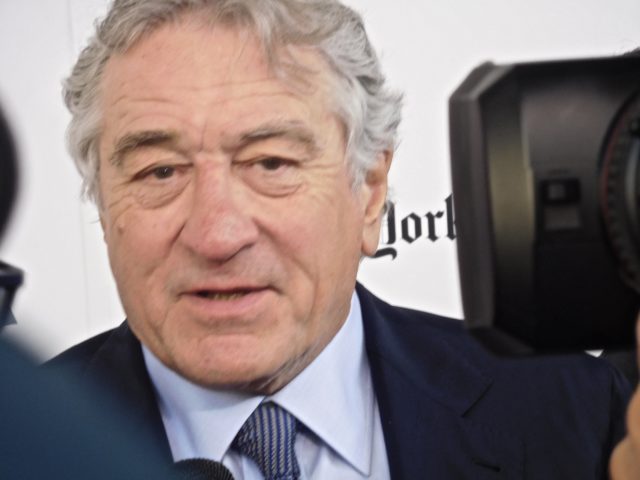 They should just call this Robert De Niro Week! The iconic and beloved actor has had a sensational week that began Monday when he received a Lifetime Achievement Award from the Film Society of Lincoln Society to celebrate his phenomenal career. On Thursday De Niro was the center of attention at the premiere of the new HBO film, “The Wizard of Lies,” in which the legendary actor stars as Bernie Madoff in another awards worthy performance.

“The Wizard of Lies” is masterly directed by Barry Levinson, who collaborated with De Niro on four other films and was one of the speakers who praised the actor at the Lincoln Center gala Monday. The HBO film is adapted from New York Times reporter Diana B. Henriques’ book, “The Wizard of Lies: Bernie Madoff and the Death of Trust,” and the script is co-written by Sam Levinson and John Burnham Schwartz.

By now everyone knows the basic story: In 2008 the stockbroker, investment advisor and financier Bernie Madoff was arrested for masterminding a 50 billion fraud on his unsuspecting clients, who included Holocaust survivor Elie Wiesel and various charities. The film is a non-linear look into Bernie Madoff’s downfall, his Ponzi scheme, his monumental deception and lies and the effects on his wife and sons who were catapulted into a nightmare of intense public and private scrutiny, not to mention possible prison time.

The Madoff story has the makings of a Greek tragedy with a protagonist who is complicated and ultimately inscrutable, and the HBO movie has ultimately wisely left it up to viewers to reach their own conclusions about this man and his family. This take is decidedly more sympathetic to this doomed family that you might expect; it appears like Madoff tried to shield his sons and wife from his crimes although they too appeared to be victims. His sons died, one by his own hand and the other by an aggressive cancer that returned, possibly as a result of the stress caused by his father’s crimes. (Look back at my report four years ago when I spotted Andrew at a screening of a documentary about his father at the Tribeca Film Festival: https://www.reellifewithjane.com/2013/04/andrew-madoff-attends-tribeca-premiere-of-documentary-about-his-father/.)

One unexpected pleasure of the film is the presence of the New York Times reporter herself; Henriques plays herself and interviews De Niro as Madoff in the prison where he tells his own version of his story. She holds her own against De Niro, and it’s a brilliant move on the part of director Barry Levinson — who will also be recognized awards season — since Henriques is the real deal and comes across as competent and brainy as her savvy reporting.

Last night at the premiere’s lavish afterparty at MoMa, I spotted Oscar winner Cuba Gooding Jr. and Edie Falco partying with the stars of the HBO film.

HBO knows they have a hit and they celebrated with a lavish and glamorous party. In a corner of the beautiful museum, De Niro, with his beautiful wife Grace Hightower, looking relaxed and constantly smiled, mixing with guests as he posed for photographs. He was still partying at midnight when I left.

“The Wizard of Lies” premieres Saturday, May 20 on HBO.