When I was a teenager, I studied ballet with the Louisville Ballet Company in Kentucky, often taking classes with the company. One of my classmates was a girl named Wendy Whelan. Even back then, she was a standout in the class. Wendy went on to become one of the most celebrated ballerinas with New York City Ballet.

Now, Wendy is the subject of a documentary called “Restless Creature,” in which we follow her as she contends with the reality of aging as a ballet dancer. The film is an intimate glimpse into her life, including footage of her arthroscopic hip surgery (which isn’t as graphic as you might think). 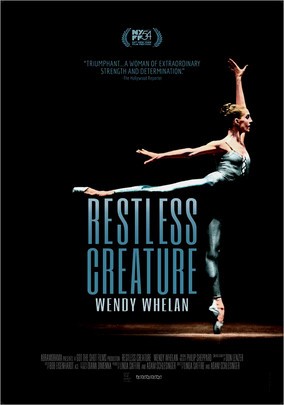 Wendy’s record-setting 30-year career with New York City Ballet involved performing with the world’s best choreographers, often in new works created for her. Ballet icon George Balanchine passed away shortly after Wendy arrived in New York, but she was able to work with choreographer Jerome Robbins for more than a decade before he died in 1998. (Robbins is perhaps best known as the choreographer of the film version of “West Side Story” but also won Tony Awards as a Broadway choreographer.)

Early on in “Restless Creature,” Wendy says she had felt if she couldn’t dance, she’d rather die. Then, she’s faced with that very possibility. She also says that she doesn’t want to have the traditional farewell with the ballet company that consists of streamers, confetti, and flowers. But as she comes to terms with her limitations, that’s exactly what happens.

For her final performance with NYCB, she asks choreographers Christopher Wheeldon and Alexei Ratmansky to create a piece for her and two male partners. The film includes a great deal of footage of this performance with some interesting camera work from above the stage. Then, we see her drinking in the love as the audience stands, the streamers and confetti fall, and the flowers pile up as each member of the company comes on stage with a stem in their heartfelt goodbye to her.

Luckily for Wendy, her recovery from hip surgery went well, and while ballet is too demanding for a late 40s body, contemporary dance is possible. So she has reinvented herself as a dancer in that style.

Now 50, Wendy is also an artist-in-residence at Barnard College and an Artistic Associate at New York’s City Center, where she’s developing new projects.

While the film may include a bit more detail than non-dance fans really want to know, it’s ultimately about aging and learning how to deal with limitations.

“Restless Creature,” directed by Linda Saffire and Adam Schlesinger, is currently playing in New York City at Film Forum and the Elinor Bunin Theater at Lincoln Center. It will open in Los Angeles at Laemmle Royal on June 9, 2017, followed by a national rollout.