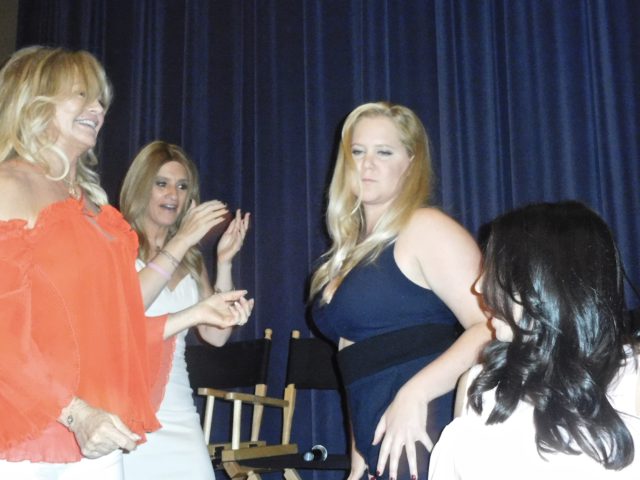 Goldie Hawn and Amy Schumer turned up to participate in a raucous conversation with excited fans and mommy bloggers after a screening of their new comedy “Snatched” in midtown Manhattan. The actresses play play a wacky but lovable mother-daughter duo who go on vacation together with unexpected results. (Director Jonathan Levine and producer Paul Feig joined them at the event.)

Denise Albert and Melissa Musen Gerstein, co-creators of a multi-media mom-centric brand and event company known as the Moms, hosted the screening and following panel.

Amy Schumer plays a self-centered woman who is dumped by her rocker boyfriend right before they were set to take off on a holiday. After all her friends turn her down, she persuades her ultra-cautious mother to take her boyfriend’s place on the vacation. Comic hijinks ensue, including entanglements with oddballs and the aforementioned kidnapping.

Following are highlights from the 30-minute conversation:

Amy on meeting Hawn: I met Goldie on a plane and I just stared at her the way we would all do if we were on a plane with Goldie Hawn. And then when I got off (the plane) to go into the airport, I went up to Goldie at the airport and said, “Hi, I’m Amy.’… I said I wanted her to play my mom in this movie and she was very sweet, but she definitely didn’t know who I was.”

Goldie: We worked really hard to get this (movie) going… We wanted it to happen and eventually it did.

Goldie on whether she ever planned to work again after 14 years away from the screen: “You don’t really have a plan in this industry… Did I decide to return? No. What I was feeling was kind of an itch to go back to doing films.There was the time for my children and I loved every second of it and still do by the way. But I was getting that itch and thinking what would it be like, I wonder if I (went back to making films)? And I said this to a couple of friends of mine, “I wonder if I’ll every do another movie to make people laugh again?”… It (this movie) came right at that time.”

Amy on whether they have a mother-daughter relationship: “I think we feel very connected to each, and I’ve loved Goldie my whole live like most of the people in this room. So you just pray that she would care about me too, and we connected early on and fell in love.”

Goldie: “And we have the same heritage… When you see someone you feel you’ve know your whole life, that’s the way it is. And a lot of it has to do with the fact that we’re both kind of Eastern European. We have similar backgrounds and that kind of thing.”

Amy on her role: “I feel like I play who I was as a teenager, selfish and so entitled… I really wanted to make this movie as a love letter to my mom to say I’m sorry and also I love you.”

Goldie on her children and a plug for them on social media: (In preparation for the Met Ball Monday evening, her daughter Kate Hudson posted images of her self wearing a pillow on her head: https://www.instagram.com/p/BThobyXhFqe/?taken-by=katehudson&hl=en). “She posted a picture of herself…. It’s so deeply funny we just laughed over it… Oliver has posted… Has anyone followed Oliver Hudson? I suggest you do.… He went over the grid and he’s deeply funny… and Wyatt is off making a movie, so the kids are just doing great.”

Goldie: “The fear was that they (her children) would be fearful that they couldn’t top us and that’s a heavy thing, their mom and dad, they’re big movie stars. How do you survive being that child?… A big part of our lesson (to them) was to get resilient… You want to go into the business then get resilient. You’re going to get shot down… You’re not going to get jobs… The key is that if you don’t have it get out… Don’t spend your life doing it so find out what else you love.”

Amy: “I was raised delusion-ally confident… My parents said you’re amazing, you’re the most beautiful, and I bought it. And it was too late when I realized they were lying to me.”

Amy on not being pregnant: “That’s right, my uterus is currently empty… I work very hard to not be a mom.”

Goldie on laughter getting you through hard times: “We do laugh, and our family does and it’s kind of the way we survive … If you can’t laugh over things that are hard then you’re just going to live in sadness… This is how we are… We sit shiva. This is the kind of thing we do when our parents or grandparents pass, we laugh. We laugh together… You live for fun and you laugh for fun.”

The director on whether the actresses did improv: “Everybody had the opportunity to improvise… It was never dogmatic that they had to stick to the script and a lot of the more subtle nuanced moments came out of improv.”

Goldie: In one scene the direction was simply, “Just freak out.” That was my direction and that’s what I did.”

The event ended with Amy and Goldie dancing. Denise Albert just finished a year and a half of treatment for breast cancer and she’s started a “dance for the breast cancer challenge.” She asked Schumer and Hawn if they wanted to take the challenge and they were up in a flash showing off their best dance moves. 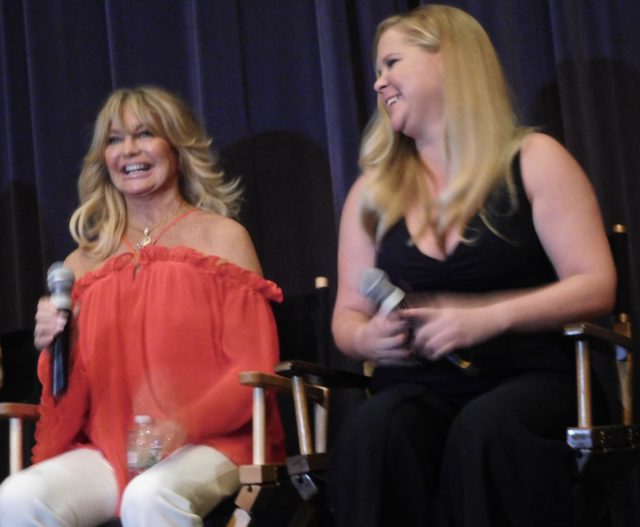