For movie lovers, Steven Soderbergh’s return as a director for the big screen is the biggest cinema event of the summer. Soderbergh hinted repeatedly in the past that he might retire from films, but fortunately for cinephiles he changed his mind.

His new film, “Logan Lucky,” is a heist thriller starring Channing Tatum, Adam Driver and Daniel Craig. The film will be released across the country August 18 by Fingerprint Releasing and Bleecker Street.

This is Soderbergh’s first big-screen directing stint since “Side Effects” in 2013. Soderbergh has been very busy working in television as a producer (“The Girlfriend Experience”) and directing (“The Knick” and “Behind the Candelabra”).
The press release describes “Logan Lucky” as an action thriller about “brothers trying to reverse a family curse,” adding, “brothers Jimmy (Channing Tatum) and Clyde Logan (Adam Driver) set out to execute an elaborate robbery during the legendary Coca-Cola 600 race at Charlotte Motor Speedway.”

The actors speak in a thick Southern accent, and the movie looks decidedly unglamorous but also hilarious in the vein of the “Oceans” franchise. (“Soderbergh” is also the producer of the new “Oceans Eight.”) 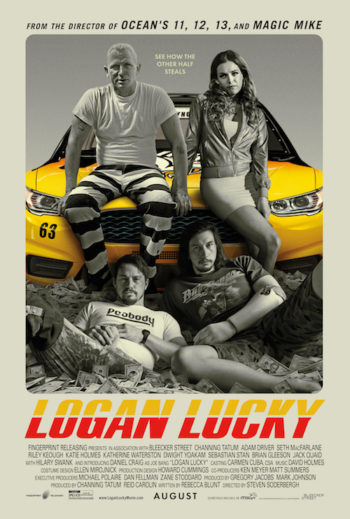