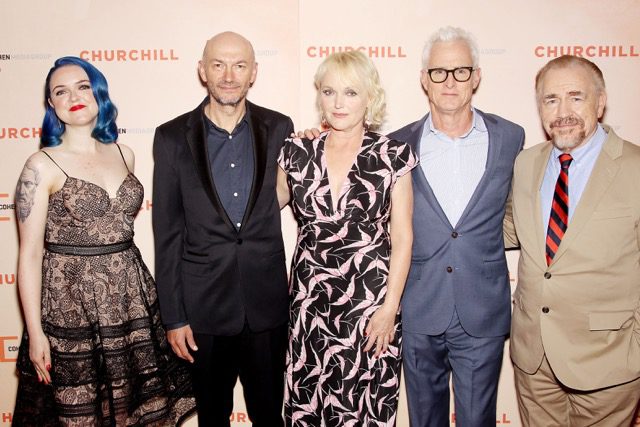 The great Scottish actor Brian Cox has portrayed J. Edgar Hoover, Trotsky and Stalin among a number of famous and infamous historical characters. But now Cox has undertaken his most challenging role of all as Winston Churchill in a drama set days before the crucial turning point of World War II, the Allied D-Day landings in Normandy.

During this period Churchill is plagued by depression and an obsession with his historical destiny and becomes reluctant to embark on the large-scale campaign. Veteran actress Miranda Richardson plays Churchill’s beleaguered wife Clemmie and John Slattery plays Dwight Eisenhower. Directed by Jonathan Teplitzky and written by Alex von Tunzelmann, the film opens Friday June 2.

Monday evening the cast of “Churchhill” celebrated the film’s U.S. premiere with a splashy celebration at the Whitby Hotel on West 56th Street in Manhattan. The afterparty was at the Carnegie Club, which is decorated by photographs by famous historical people, including J.F.K. and Churchill.
On the red carpet, director Jonathan Teplitzky told me Brian Cox was “destined” to play Churchill, that he was the right age, height and stature. “I think in his mind he was preparing for a long, long time.”

The movie also focuses on the push-pull between Churchill and Dwight Eisenhower in planning the Normandy landing. John Slattery, who plays Eisenhower told me on the red carpet that to prepare for his part he read everything he could about the man. “There wasn’t a lot of psychology written about Eisenhower.

Truman was flashier. Roosevelt was more erudite,” Slattery said. “What I came away with was a very straight forward guy who was trustworthy and that’s why he got to the position he got to. Because he wasn’t known as a great strategist. He was a motivator of men. He was a straight arrow and so all those players that were making those decisions, Churchill and Roosevelt and Stalin and De Gaulle trusted him and that’s how he rose through the ranks.”

As for his scenes with Cox, Slattery told me, “The greatest things about those scenes, he starts out restrained but then he’s driven to yelling and screaming. He’s trying to calm Churchill down, we’ve looked at this thing from every possibly angel and the best scenario is this invasion, is to liberate France and Churchill though he didn’t have a good reason at the last minute tried to pull a fast one and get them to do something else and sway the king and so they got under each other’s skin and they end up yelling and screaming at each other.”

From the first day Cox arrived on set Slattery said, he was wearing the bowler and huffing and puffing the cigar, “He just looked like Churchill. They just turned the camera on and started. It was great!” 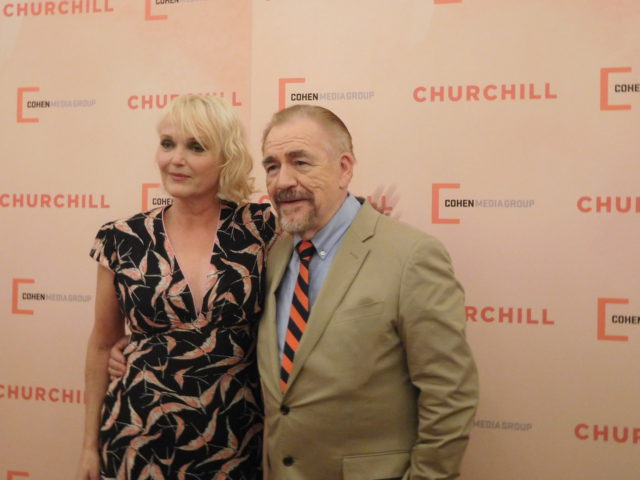