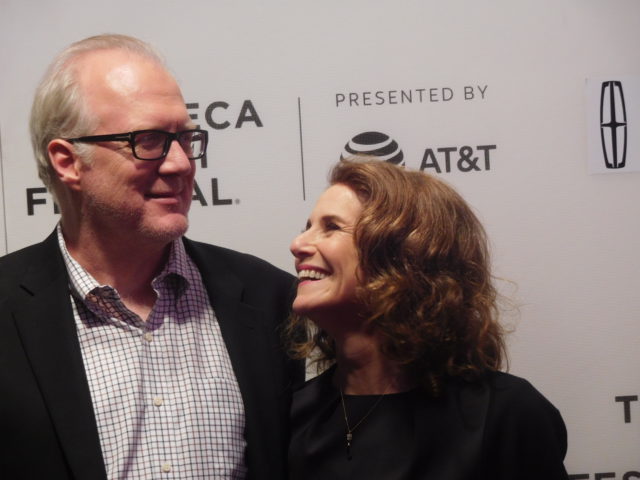 “One day you’re naked in bed and the next day you’re on the red carpet,” Debra Winger told me at the premiere of her new film, “The Lovers,” an original sex comedy that manages to be both serious and farcical.

Written and directed by Azazel Jacobs, Tracy Letts and Winger co-star as Michael and Mary, a long-time couple whose marriage has gone stale. Michael is having an affair with a sexy but emotional neighbor (Melora Walters), and Mary’s cheating with a sexy and charming partner (Aidan Gillen who’s in the upcoming Guy Ritchie’s film “King Arthur.”) Their lovers give Mary and Michael ultimatums to leave their spouses after their son’s visit (Tyler Ross).

One morning Mary and Michael wake up facing each other in bed and have a romantic encounter that awakens passion for each other. Soon they’re cheating on their lovers.

This is Winger’s best part in years. The three-time Oscar nominated actress, who is 63, was a big star in her 20’s with “Urban Cowboy,” “Terms of Endearment” and “An Officer and a Gentleman.”

Then she took time off from the limelight. Later Rosanna Arquette made the documentary, “Searching for Debra Winger,” in 2002. The truth is Winger never really went away, but took time to raise three children, teach and make occasional indie films.

More recently she’s appeared in the Netflix series “The Ranch.” Choosy about her roles – it took the director five years he told me to find the right project – Winger told me what drew her to “The Lovers” was the subject.

“I think just the idea of how to make love stay has always been sort of a theme with me, even back to my early movies. I’ve always been attracted to love stories and this one seemed age appropriate.”

If better roles for women in Hollywood films had been available would she have taken a break?

“ I don’t think of it that way,” she told me. “I just think of my life in a more whole mystic way, so there wasn’t anything for me to do so I did other things and now there’s something for me to do. It’s like all of life is figuring out how to be useful.”

She added, “People like to sometimes project their narrative onto what I did but I just pulled into my life away, not necessarily away from theirs but that’s what it looked like to them.”

During the Q&A after the screening, Tracy Letts, who is also a Pulitzer-Prize winner author, said he didn’t know director Azazel Jacobs’ work but he knew of Winger of course. He added, “I’m a middle-aged guy and the idea that you get to tell a story about middle-aged people and love and romance, sex and relationships, was very compelling.”

In discussing the origin of the story during the Q&A, Jacobs said, “I like narrative film and I especially like narratives where you’re allowed to go this way and that way and it’s always in a straight line somehow, kind of stumbling upon this riddle, thinking about a couple that had been married and then fallen in love with each other and cheating on their lovers with each other.”

“I think I was about a page into it when I started seeing, like, oh I think this is where they’re heading and then I just kind of put that on the top of the page, that they’re going to wind up sneaking back to each other. It made me laugh,” Jacobs said. “I so enjoyed going back and forth between these people and getting them closer and closer.”