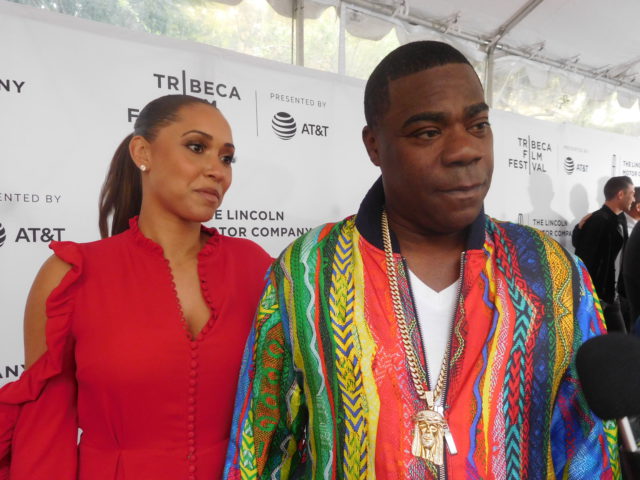 Tracy Morgan, who promised to get “a whole lot of women pregnant” at the 2015 Emmy’s, riffed on the same subject Sunday evening on the red carpet at the world premiere of his new film “The Clapper” at the Tribeca Film Festival. Morgan and Ed Helms co-star as professional applauders for infomercials in this romantic comedy directed by Dito Montiel.

The “30 Rock” comedian, who introduced his “date” as Roz, said he was going to get her pregnant right after the screening.

“I don’t do the PC thing. I don’t do that. It’s straight up and down 6 o’clock. That’s how I do things,” he told journalists in describing the source of his comedy.

Then he told them, “See my lady Roz? I have to get that knocked up.”

“Roz” was actually Morgan’s wife Megan Wollover, who he married after the horrific crash in 2014 that put him in a coma. They have one child.

“The Clapper,” which Montiel adapted from his book of the same name, also stars Ed Helms and Adam Levine in a featured role. (I couldn’t get into the movie, which was sold out and had a long rush line.)

Other highlights from the red carpet: How Richard Pryor influence on his comedy: “He’s the Messiah! He’s the one who walked on water for us!”

On his stint at Saturday Night Life: “I got to work with Obi-Wan Kenobi, Lorne Michaels, the force was with me.”

On what he and Roz do on date night: “We watch the championship fights. We love our boxing. We talk sports all the time. Me and my lady have things in common. We just don’t do it. We talk and all that. She made some lasagna the other night, six different cheeses.”

Morgan’s worked with Montiel before, in the 2011 Al Pacino cop drama, “The Son of No One.” What was like working with Dito again someone asked?

I asked Morgan what he learned about himself in the role that surprised him?

“You always have surprises because you don’t know what’s inside. You gotta go inside. I learned this trip what connects me to my character? I gotta create a back story. How did he get there? If he’s messed up what made him messed up? All that’s in your head.”

It’s good to see Morgan looking so good and doing what he does best, or second best if you count making women pregnant.

Moan looks great and seems to have made a full recovery. How does he feel?

“I feel well. I’m eating a lot of protein.” Then he pointed to his “date” Roz and repeated: “Yeah I’m probably going to get her pregnant tonight.”

As Morgan and his wife made their way into the theater the director was still making his way down the red carpet. Montiel’s 2006 film “A Guide to Recognizing Your Saints” made Channing Tatum a star. More recently he directed Robin Williams in his last film,“Boulevard.”

I asked Montiel if being a clapper was an actual profession?

It turns out it is. But the trick is you can’t be recognized or it blows your cover so clappers wear disguises. The film was inspired by his real-life experiences of going to L.A. with his friend Eddie (Krumble) to look for work.

“He got a job as a clapper, a paid audience member, and he would just laugh on terrible shows and infomercials,” Montiel told me. “He would get $75 a show. And then he got to answer a question on an infomercial and he got an extra $100. But because his face was exposed it screwed him up and he couldn’t get hired for two months,” he said. “The idea of fame screwing you up sounded like something that is kind of happening in the world these days as well, so it was an interesting route to go through.” 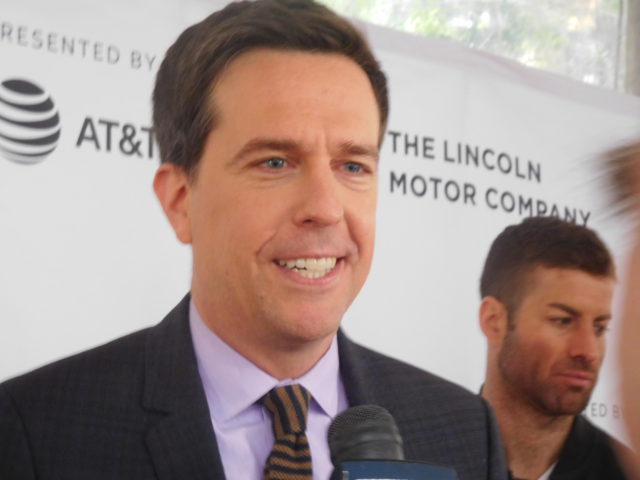 As for casting Ed Helms, who has a loopy grin and became famous with the “Hangover” movies, Montiel told me, “ Ed’s a really great actor but he also brings a smile to it and we needed to have a little bit of a smile or else we can go down a dark hole.”

I spotted Sting and his wife Trudie Styler, who produced “A Guide to Recognizing Your Saints,” making their way into the theater.