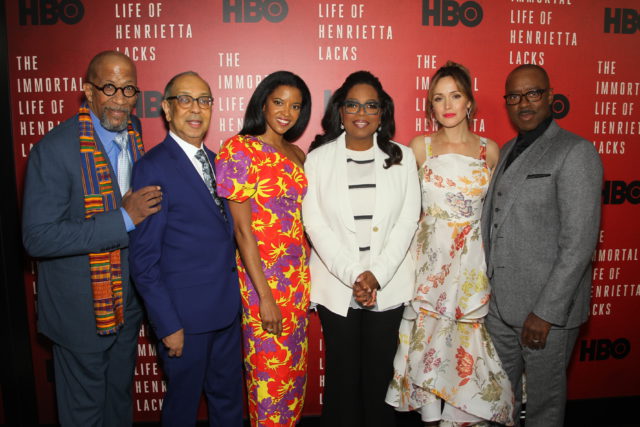 Oprah Winfrey stars as the title character in HBO’s “The Immortal Life of Henrietta Lacks,” adapted from Rebecca Skloot’s New York Times bestseller about the African American woman whose cells were used to in research labs around the world.

Rose Byrne co-stars as Skloot, who told me on the red carpet she never dreamed she would be standing there promoting a movie based on her book, never mind that Winfrey would star as Henrietta’s daughter Deborah, a complicated woman searching for answers from a scientific community that treated her mother like a lab specimen rather than a human being.

At Tuesday’s premiere for the film, which debuts April 22 on HBO, Winfrey’s cast members praised her talent and professionalism. Director George C. Wolfe, who directed from his screenplay, told me Winfrey was a collaborative artist  and in person very down to earth.

Deborah’s children Jeri Lacks Whye and Alfred Jr. served as consultants on the film. They were understandable awed and trying to take in the surreal experience they told me on the red carpet. Mr. Carter told me his first meeting with one of one of the world’s wealthiest women was over dinner. Being a gentlemen Mr. Carter paid the bill. “I was worried I didn’t have enough on my debit card to cover the check,” he laughed. Fortunately he did.

Before the screening Winfrey told the audience, “I didn’t want to do this film. I was really scared because I haven’t done a lot of films. It’s not where I feel the most at home. Acting was just something I was doing on the side, so I had a couple of other actresses in mind for this role that I thought should play Debra in the beginning.”

None of them meet the approval of HBO honchos.“As it turned out George Wolfe and Audra McDonald – I love to drop her name,” Oprah laughed. “Audra said, ‘Girl, if you ever get a chance to work with George Wolfe you should take it however it comes because he will change you as an actress.’”

So she took the leap, adding, “George said he would find a way to do the script because we’d already had two other screenwriters. I know what this story should be, Wolfe told her, “‘It’s a story about a daughter in search of her mother and in finding her mother she finds herself. It’s a journey of discovery and I can do that for you. Trust me.’ So I really leaned in to the esteemed directorial hands of Georg Wolfe and said yes to the film.” Especially Winfrey said, “Hearing Deborah Lacks herself say she had always wanted me to play her and that kind of sealed the deal. My only regret this glorious evening and what is to come on HBO is the Debrah Lacks isn’t here to experience it herself.” Sadly she died nine months before the book was published.

Wolfe spoke of how they filmed the project in Atlanta in August. “Every day it was 950 degrees. It was hell. It was hot. It was horrible. And the counter to that was every day an astonishing, brilliant endless parade of unbelievable actor with ferocious hearts and bravery and willingness to do wherever the material required showed up every day and we got to play.”

Afterwards the A-listers moved to Tao Downtown where Oprah Winfrey was the center of attention  and posed for selfies for what seemed like hours. 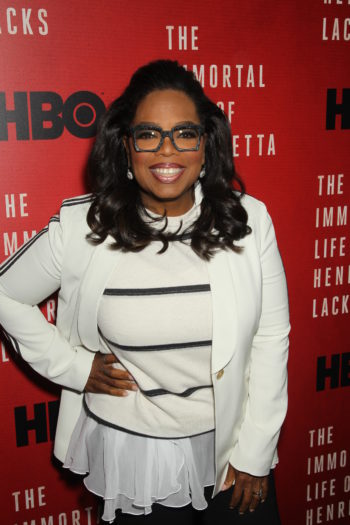