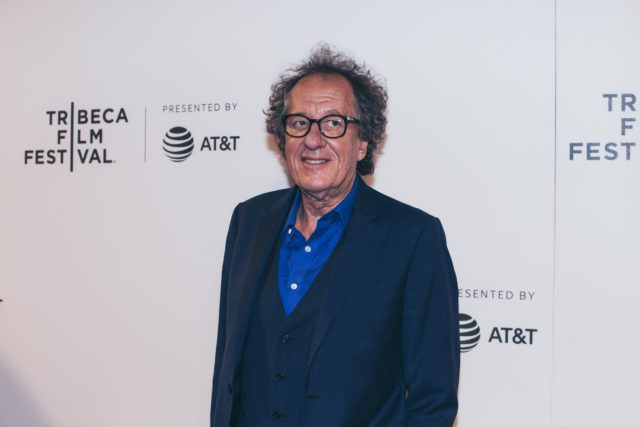 Geoffrey Rush stars as Albert Einstein in “Genius,” the new ten-episode series debuting April 25 on National Geographic. Thursday evening the Tribeca Film Festival screened the first episode and anyone who saw it will ever think of Einstein the same way again.

In “Genius,” directed by Ron Howard and produced by Brian Grazer, the famed physicist has become a three-dimensional character who liked to laugh and was something of a womanizer.

The television series opens with a shot of Einstein having sex with his much younger secretary, his pants below his knees. It seems he cheated often on his second, long suffering wife, Elsa, who also happened to be his first cousin. They stayed together and later in life, Emily Watson, who plays Elsa, said they even began to look alike.

Johnny Flynn plays the young Albert Einstein and the action moves back and forth in time.

Asked about the genesis of the show, Grazer said, “I love Geoffrey Rush’s voice,” adding, “Albert Einstein certainly was a progenitor of modern disruption and we think of disruption so much right now, and he kind of began all that by challenging things in science that you wouldn’t ordinarily challenge. I didn’t know very much about Albert Einstein and I wanted to learn about him.”

As for the two actors who play Einstein at different stages in his life, Rush said he and Flynn talked about their approach to the role. They both wanted to portray the impish and whimsical part of the man.

“What the public Einstein was like, talking to congress or doing lectures or amusing reporters, he seemed to have a very quick wit and that’s why i would talk to Johnny and say I’m seeing as much Harpo Marx in there as I am the great scientist,” Rush said. “The two-dimensional cliched poster image, the emoji of Einstein. I want to write to the Emoji people and say you need to get that one in there soon so I can sign my letters with it.”

Rush added, “We didn’t want it to be an exercise in mimicry because it felt like there were too many interesting dimensions to him in his scientific world and in his domestic and marital life.”

Biller said the goal of he show is to humanize the man. “To ask who was he? And he was a really sexual being.” The Walter Isaac biography mentions that Einstein had “all these extraordinary affairs, including with Betty Newman, who was his secretary at one time. It was just a part of who he was.”

“When he came to America for the first time, who did he hang around with the most?” said Howard. “Charlie Chaplin. Charlie was also a lady’s man. But he was also very funny.” When they talked to people who knew Einstein one of the first things they would say was that he loved a great joke and was very funny.

Some sparkling highlights of the panel:

Geoffrey Rush on having two people play Einstein instead of him playing both parts:

“I think the elephant in the room here is that you couldn’t possibly believe I could get away with playing a sixteen year old.”
Johnny Flynn who plays ‘young” Einstein shares a birthday with Albert Einstein while Geoffrey Rush confessed he shares a birthday with Sylvester Stallone and Nancy Reagan. “Make of that what you will he cracked.”

Spoiler Alert! Did Samantha Colley probably give a plot point away on the new series?  She mentioned during the panel discussion that while no one really knows how Einstein’s eldest daughter died, some believe she died of scarlet fever.  As soon as she mentioned this she immediacy paused, covered her mouth and said “uh oh!”

Season two will chronicle the life of another renowned mastermind which will be revealed during the season one finale of “Genius” June 20.

Could the second season or any other season be dedicated to a woman?

Howard said they have begun to develop the stories of two or three people. “We’re  hoping one of them is a woman. We have someone that’s on our mind.”