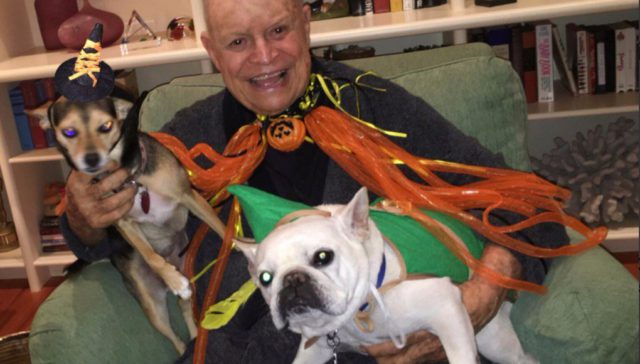 Don Rickles’ death at age 90 is mourned by fans everywhere, especially Hollywood celebrities who are sharing their memories and tributes on Social Media.

Above is a photo of a tweet Rickles sent out in October where he’s with his two dogs who seem to be wearing capes. It’s a very different image of him from that of his nightclub persona.

I caught a Don Rickles show in Atlantic City some 15 years ago and he was at the top of his game, insulting audience members and celebrities in the same spirit. He was an equal opportunity insult comic who cracked everyone up.

The story Joy Behar tells about Frank Sinatra is one of my favorite. Sinatra tells a story about how Rickles wanted to impress a pretty girl. Rickles asked Sinatra to come by his table when he was done eating and say hi to him and his date. Sinatra said he would stop by as soon as he finished his espresso. (Right, he was drinking espresso!)

A little later Sinatra stopped by the comic’s table to say hell and Rickles barked, “Can’t you see I’m eating?” Why are you bothering me now?

At the heart of Rickles’ jokes there was heart and intelligence which is probably why no one ever got angry. Also, especially compared to comedians today, he didn’t have to talk dirty or use profanity to get a laugh.

“Don Rickles was a giant, a legend…and I can hear his voice now, skewering me for being so lofty. I had the honor of working with him on my picture Casino. He was a professional. He kept me doubled over with laughter every day on the set – yet he was a complete pro. We became friends over the years and I had the honor of being roasted by him more than once – sometimes when I didn’t expect it. He just started showing up at places and insulting me. Experiencing Don, and tuning into his mind, I witnessed the evolution of his comedy. It was like listening to a great jazz musician wail. Nobody else did what he did. He made comedy into an art form. And like all geniuses, comic or otherwise, he’s irreplaceable. He was much loved. I’m really missing this man.”

So sad to learn of my friend @DonRickles passing. We go way back to when he was doing clubs in Florida. So proud of him. Loved him!

Don Rickles was simply the best. He created insult comedy &yet every 1 of his targets felt loved and honored. One of a kind.
#RIPdonrickles

Don Rickles has passed away. A giant loss.

In lieu of flowers, Don Rickles’ family has requested that people drop their pants and fire a rocket. #RIPDonRickles

The death of Don Rickles is a major loss to the comedy world. If you want to laugh, go to YouTube and watch him on The Tonight Show with Sinatra. Possibly one of the funniest people ever. Ever!

Being skewered by Don Rickles was side-splitting funny. A gentle soul with rapid fire wit. xoB

The friendship The advice. The laughs. The toasts. The dinners. I Love you, Don. @DonRickles #DonRickles #LoopGroup

The day you were me was one of the proudest days of my life. Goodbye to our good friend Don Rickles. #RIP

Absolutely devastated by the loss of #DonRickles. A dear, dear friend and monumental talent. I got my #DGA card directing him in a PSA. #RIP

A God died today. Don Rickles, we did not want to ever lose you. Never. Hanx.

“Don Rickles was a brilliant improvisational comedian as well as an excellent actor. What many people do not realize is that for someone so widely known as an insult comedian, Don Rickles was also, genuinely, a very kind man.”