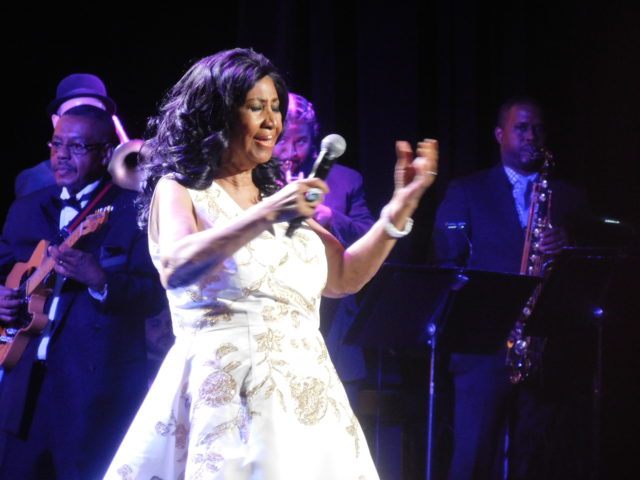 There’s only one Aretha Franklin, and she was the star attraction when the Tribeca Film Festival kicked off Wednesday evening at Radio City Music Hall.

The 16th Tribeca Film Festival got off to a sensational start with the premiere of “Clive Davis: The Soundtrack of Our Lives,” a fascinating look at probably the greatest record man of all time.

The documentary chronicles how Davis, now 85, rose through the ranks of Columbia Records to become president of the label. The music visionary, who began his career as an attorney, had a strong hand in guiding the careers of many rock legends, including Aretha, Janis Joplin, Bruce Springsteen, Barry Manilow, Patti Smith, Dionne Warwick, Carly Simon, Arrowsmith and Earth, Wind and Fire. He’s also worked with L.A. Reid, Babyface, Sean “Diddy” Combs and The Notorious B.I.G. His more recent big hit artist is Alicia Keys.

But Davis’ most famous protege was probably Whitney Houston, who he signed when she was still a teenager. The film takes a long look at their partnership and her decline from drugs. Houston died the night of Davis’s famous Grammy party and in the documentary Davis said it was like the death of a family member.

There are many fascinating stories and interviews with artists, executives, friends and relatives. Then there’s Clive himself, offering insights and surprising revelations, not least of all coming out as bisexual in his 80’s.

New York governor Andrew Cuomo got the evening rolling and introduced Tribeca Film Festival founders Robert De Niro and Jane Rosenthal. De Niro mentioned the dream team of performers that would perform after the screening: Jennifer Hudson, Manilow, Earth, Wind & Fire, Warwick, Simon and the one and only Aretha Franklin.

“All of them have not performed at the inauguration,” De Niro cracked.

After the screening, Whoopi Goldberg came out to host and introduce the performers. She also told jokes and kept the patter going between sets.

What a concert! First there was a lavish and lush orchestra. Goldberg noted and praised the beauty of live music and in the only political note reminded audiences of their responsibility to support the arts.

In an evening of stand-out moments, highlights included Jennifer Hudson singing signature Whitney Houston tunes. She asked the audience to remember Whitney with “positivity.” And Dionne Warwick, whose voice is a little raspier but still terrific, performed a moving rendition of “That’s What Friends Are For.” 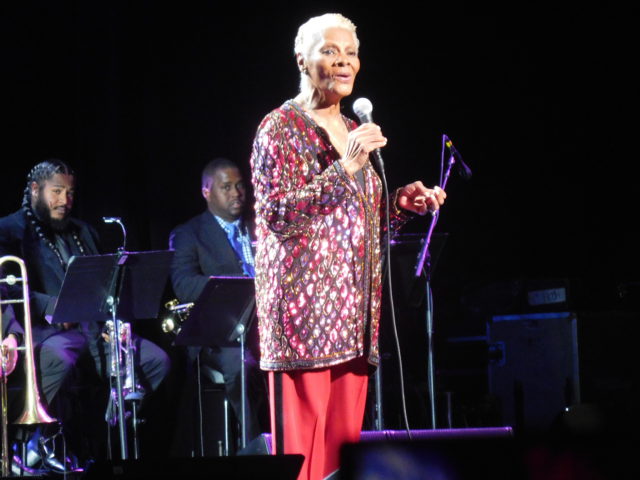 And although Aretha only sang two numbers – “Natural Woman” and “Freeway of Love” – she owned the night.
In her introduction Goldberg said, “There are quintessential voices that we have each generation and she encompasses everything… It’s not enough to say that she’s the Queen of Soul,” said Goldberg. “We are lucky to be in this room with Clive Davis and the one and only Aretha Franklin.”

The audience was standing, dancing, swaying and even weeping during the entire concert.

Franklin complained of an upper respiratory infection and shortness of breath. “But,” she told the audience, “I just wasn’t going to miss this evening.”