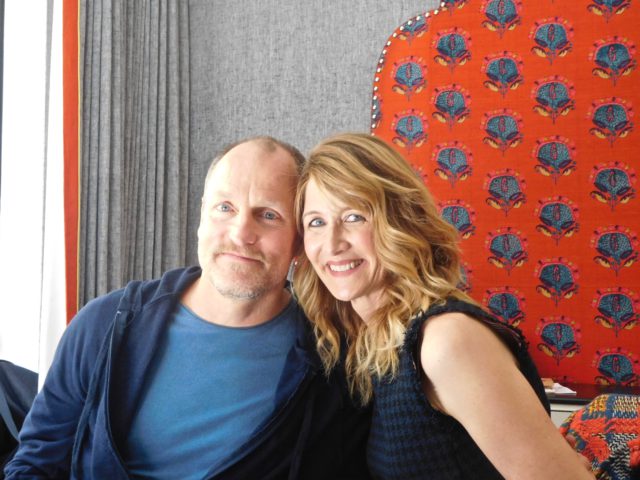 “We all know in the world of subversive comedy you can say much more with deep poignancy than you might get away with in another kind of” genre, Laura Dern told journalists at a press conference last weekend for her new film, “Wilson,” which co-stars Woody Harrelson. “Wilson” is a bittersweet dramedy based on the graphic novel by Daniel Clowes (“Ghost Story”) and directed by Craig Johnson (“The Skeleton Twins”).

Dern and Harrelson did the junket rounds together and occasionally held hands and hugged. Harrelson plays the titular character, a neurotic, nutty, obnoxious oddball who is ultimately endearing and charming, because he’s well, played by Harrelson. One of the film’s highlights is how aptly Harrelson’s superb comic timing is on display. There’s one scene where he gets entangled in balloons at a kiddie amusement park that is worthy of Buster Keaton.

Both Dern and Harrelson have blockbusters coming up this year: Harrelson will star in “War for the Planet of the Apes,” in which he plays a very bad guy, and Dern will be in the hotly anticipated “Star Wars: The Last Jedi.” You can also catch Dern now as a rich, brittle Tiger mother who likes loud sex in HBO’s “Big Little Lies.”

As for Harrelson’s character in “Wilson,” he’s only too recognizable. If you’re in a bus full of empty seats, Wilson is the kind of guy who will slide next to you and unburden himself of every thought or detail of his life as you desperately look for an escape hatch. But along the way his complete honesty and filterless observations may strike home.

Laura Dern plays Pippi, his ex-wife, a former drug addict with anger issues who is finally getting her life together and hasn’t seen Wilson for years. After the death of his father, Wilson tries to reconnect with Pippi, with whom he’s still in love. When he discovers she didn’t abort but gave up for adoption the child they conceived years earlier, he makes it his mission to look up their daughter and forge an instant family.

The “family” reunion doesn’t go exactly as planned; daughter Claire (Isabella Amara) is now a moody teenager with few friends and a bad attitude. She’s curious and willing to reconnect with Wilson and Pippi, especially since her wealthy adoptive parents are generally inattentive, but these clandestine meetings involve a lot of craziness and touching moments that eventually land Wilson in hot water.

Asked if it was fun to play a person with no filter, Harrelson told journalists, “I actually have less filter than I should but like playing him there really is no filter,” he said. “I did notice that I was doing that quite a bit when we were shooting and even a little while after where I couldn’t shake it and I’d go, ‘Why did I say that?’”

Wilson is a guy who can’t let go, either of relationships or personal possessions. Asked if there was something in their lives they collected, Harrelson said he collected “stuff” from film sets. His friend, actor Owen Wilson, told him he should be on an episode of “Celebrity Hoarders.” Never mind that there is no such show.

Added Harrelson, “It really isn’t that I’m hoarding. It seems like it. But it’s that I have to go through and decide what to keep and what to throw away,” but “yeah, I think maybe I’m collecting too much stuff and eventually my day will come when I can’t even walk in the house.”

Dern noted she was a collector but of another sort. “He’s collecting boxes. I’m collecting parts of my personality that I’ve discovered playing some beautifully, complicated people, but complicated none-the-less, so I go, ‘Oh wow! Okay, I have to find the part of me that understands this and then I keep that as a character trait, so I think that I haven’t done any cleaning house so maybe I’m just becoming more and more and more complicated because I like to collect all these people somewhere inside me.”

“Who’s the woman who has 16 personalities?” Harrelson asked journalists.

When told Sybil, the actor told Dern, “So you’re like the Sybil of actors. You’ve got all every character you’ve played in there ready to…”

“Ready to come out of me,” Dern laughed.

“Oh my god! What a thought,”Harrelson said smacking his fore head.

As for what baggage she brought to her character Pippi, Dern noted, “Woody and I worked together 20-ish years ago, so my love for Woody I’ve been carrying all along.”

Harrelson started to sing “Reunited” and pumped his hands in the air.

Dern laughed and said she had to “censure” herself with Harrelson before the interview went off the tracks.

She added, “In addition, I think one thing that I felt from Daniel, from his artwork particularly, and then of course the script is that I’ve always been interested in the question of voice and certainly as a female actor that’s very interesting to me, but this idea that as fierce as Pippi is and as in love as she is with someone who has no filter, I feel like in some ways, it’s not that she’s trying to understand how to use her voice, but that she ever was even entitled to one in the first place. And I think that’s why her rage is boiling over, because she’s never been seen or given space, by her family, by anyone, which is where addiction came into her life and now she’s back with the only person who ever gave her room to be all of herself and even loved her for it, which was obviously terrifying to her, so that was the through line that was deeply interesting to me and I think what Daniel intended and we just tracked it together, bring that to fruition and make sure that it had a beginning, middle and an end.”

Asked about the life lessons learned from the kind of struggles the characters face in the film, Harrelson replied,

“I don’t know anybody who’s a fan of struggle, but all of us have our quirky little struggles,” he noted. “All the shit that happens with us in this movie, and there’s some terrible stuff, physical violence and all these things go down, but it’s funny. It’s the drama in it that makes the comedy.” 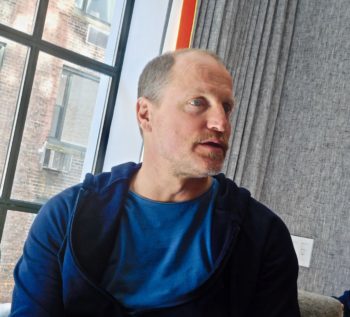