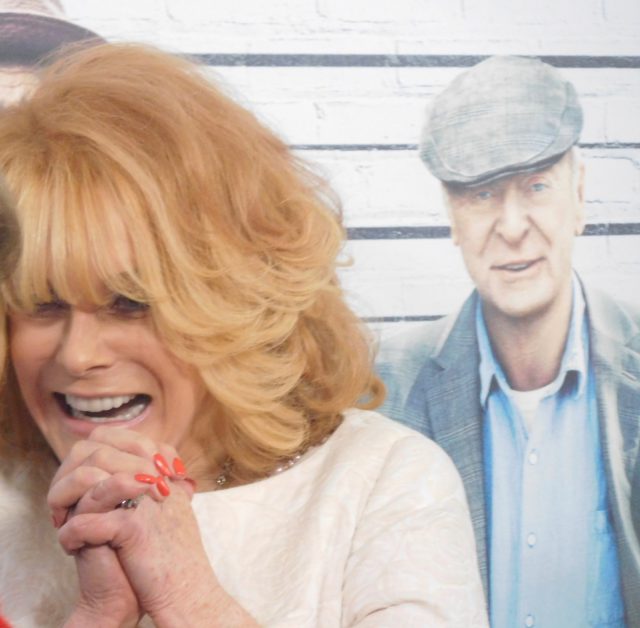 They were joined on the red carpet by Ann-Margret, who plays Alan Arkin’s love interest in the film and who is still as beautiful as she was in the Mike Nichols film “Carnal Knowledge” some 45 years ago.

Asked how she liked being the only female in the cast, the “Viva Las Vegas” star told journalists, “To watch these three, I can see them as 17 year-old teenagers. I really do,” she said. “It’s all about friendship. Being the only girl was fantastic. They’re making jokes and they’re teasing. I had a heck of a time, and the woman I’m portraying, she’s full of life. She knows that your life does not end at a certain age.”

Directed by Zach Braff and written by Theodore Melfi (“Hidden Figures”), “Going in Style” is a comedy caper about three retired steel workers and close pals whose lives are upended when their pension funds are taken away. The company for which they worked and gave their blood for more than four decades has shipped their jobs overseas and in some shady corporate restructuring are no longer obligated to pay pensions.

All three are decent men driven to desperation. Caine as Joe, who lives with his granddaughter (Joey King) – to whom he is devoted – and daughter (Maria Dizzia), may lose his home because the bank has tripled his mortgage. And Will, played by Freeman, would like to go to the West Coast more often to see his family, especially in light of a medical emergency.

The trio decide to rob a bank and to take only enough money to cover losses incurred by their pensions being stripped away. You root for these guys who undertake the heist with the planning and precision that proves they still have their mojo, even as society marginalizes them because of rampant ageism. The movie provides social commentary, not only about treatment towards the elderly, but also about people down on their luck economically that makes it particularly relevant in 2017.

“Going in Style” is a reimagining of the 1979 film of the same name about three elderly gents who just wanted to rob a bank. Caine told me on the red carpet that they wanted the men to have motivation for their actions, which the movie now has and which makes it timely.

The movie’s other strong central theme is about friendship. In the original film the men are all roommates.

How did Sir Michael think he and his co-stars would get along as roommates in real life?

“It would work,” he told me. “We’re very good friends. We spent a lot of time together, also like now, promoting the film, we’ve spent a lot of time together. We’ve had a lot of laughs.”
Alan Arkin told me he rewrote his part because he wanted his part to be funnier. “I didn’t like what the character was, who he was, so they let me reshape it. I wanted him to be a jazz musician. I wanted him to have a relationship and work. He had a wife who died 20 years ago and he was still mourning and I said I didn’t want to do that. I didn’t want to be the sad sack of the group.” (At the press conference for the few a few days earlier, Morgan Freeman and Michael Caine admitted they were jealous of Arkin’s love scenes with Ann-Margret.)

Director Zack Braff, probably most famous for “Scrubs,” told me on the red carpet that when Warner Bros. approached him about directing the film and told him Morgan Freeman and Michael Caine were already attached, his initial reaction was, “Are you kidding?” He jumped at the chance to direct he told me.

How intimated was he directing the Hollywood legends?

“They are so cool and friendly, it took the pressure off,” Braff said. “They made it fun. And they’re ridiculous, always talking over each other. They’re real-life buddies.”

After the screening guests celebrated at the movie’s afterparty at Mario Batali’s snazzy restaurant La Sirena in Chelsea.