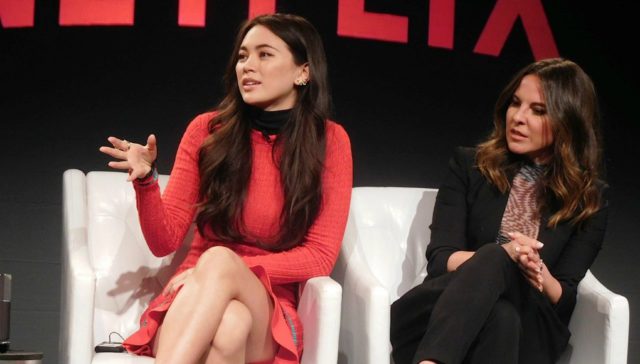 Women are the central characters of many of the new and returning programs on Netflix, which held a press day last Wednesday with all-day panels featuring the stars and showrunners.

Following are selected edited quotes from the panel:

When you were a kid growing up or when you were thinking about being an actress who were the strong female characters that you looked up to, you wanted to be, you thought were interesting?

Gillian Jacobs:​ I was obsessed with Katherine Hepburn when I was a kid and I would read a lot of biographies of her and I admired her as an actress because she took control of her career in a way that few women did in that era and bought play to produce for herself when people said that she was box office poison and couldn’t get work. And so I think she was an inspiration to me.

Logan Browning​: Sandra Bullock in “Miss Congeniality.” And did you see her going from being her natural goofy self to someone saying hey how you present yourself to the world is the first thing you see it doesn’t have to be this fake facade it can be your most feminine version of yourself. And you can still be that goofy person.

Kate del Castillo​: I also think it’s important that us as actresses can go along with the writers. Because before it was like strong leading actress, a bad ass as well call them. They were always trying to be seductive and very, you know, voluptuous and I’m a latina, I know what that means. They would always want us latinas to be all these things. That’s okay if that’s the case of the role but now at least what I’m doing — trying to do with “Ingobernable” I’m playing the first lady but she’s bad ass. She doesn’t have to show herself. I think being a bad ass, strong female actress, leading actress, it means so many other things that we need to care for. It’s not I am not a bad ass because I know manipulate men because of sex or because of my gender or because of my kids. I am because that’s the whole of me.

Gillian Jacobs:​ I think the most iconic characters in TV have been male anti heroes whether it’s Tony Soprano or breaking bad and comfortable audiences are drawn to male characters who are incredibly flawed, put other people in jeopardy and I think it’s a struggle for female characters to be that three-dimensional so I’m encouraged to see all of these women today and programming that helps push female characters in that direction.

With “Orange is the New Black” I think when it first came out many, many years ago and it was announced some people were worried that it was going to be a privileged white woman’s perspective on this experience and it turned out to very much not be that. So what do you think the impact of the show has been in terms of being able to show people the background stories of all these different characters who come from all sorts of give places, all sorts of different backgrounds? 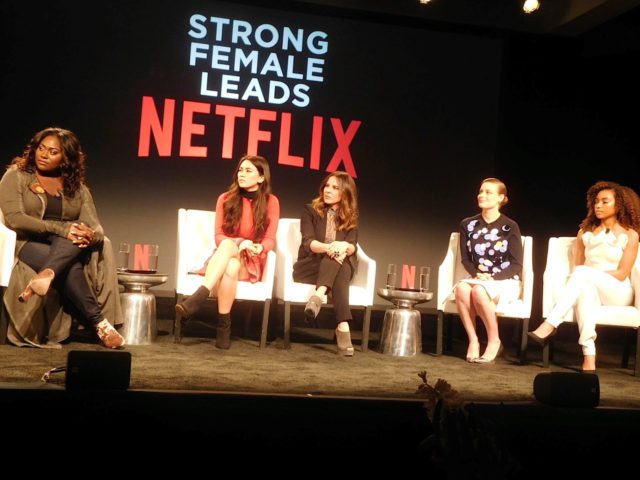 Danielle Brooks:​ Oh, man, first of all it’s been a dream to be in “Orange is the New Black” because I think — I know that it’s really shifted my perspective on what it is to be a woman in this business, to be a woman of color, what it is to be a leading woman. Especially to your point, when this was meant or it kind of tricked the world in thinking that this story was centered around this white woman. But I think gin gee — and she said it all along. Knew that that was her gateway into telling all these diverse stories. So now you don’t have one female lead you have a transgender female lead, Hispanic, black female leads, it blew my mind to be on show, my first show out of school where there are at least four black women that are series regulars on the same show. There

are at least three Hispanic women that are series regulars on the same show. So because everything that I had seen you only get one. You get that one for Octavia and so to be in this world it just made me the possibilities of what TV could be had opened up because of Netflix. And you see that with all of the shows that they produce. But for me specifically I think it’s really shifted my view on, I’m just going to hit it, on beauty. Because coming into this business right out of school I was very confused on how do I wear my hair? Do I need to lose weight? Gain weight? I can’t change my color so that’s going to have to stay the same. Like I was just so confused on my angle in the business because to your point it is very much like, okay, the sassy woman looks like this and the other woman looks like that and so to be on a show where they say there’s not one formula of what beauty is. You can have a hint of mocha chocolate latte, a hint of fat back, a hint of pimples and zits you can have that and it’s still beautiful Because people are seeing themselves on TV. Finally. And because of that they are changing not just how they feel about beauty. How they feel about people that are incarcerated, in the system, and how broken it is. They are, you know, changing their minds on religion or what it is for people that are transgender or whatever that is. So I know I just ran it but I just feel like the show has kind of really hit it when it comes to dealing with females in television.

Kate del Castillo​: I can tell you it’s stereotypes still. I remember the first show I will be here was American family and I remember I had my hair just like this color and they — it’s like, no, it has to be black. And you have to talk like this so you can — you know? I was like, okay, whatever, and then all my house supposedly was all like very Mexican. But I’m Mexican. I know what’s Mexican? You know? And I understand that. So it’s like slowly getting better because I can read. We all read scripts with much better roles. We are not doing only the maids and the prostitutes. We still are. We all know that. But it’s getting better. It’s better roles but still there’s a lot of stereotypes for sure. At least with latinas.

Jessica Henwick​: Same with Asians as well. Also I’m interested in right now. I’ve been doing this only eight years but I’ve made an effort to stay away from stereotypes. I took a lot of roles which weren’t specified as Asian but now I’m interested in roles that are specified as Asian and what are roles telling an Asian story. I remember, and it’s not a perfect film and I remember growing up and watching “Joy Luck Club” with my mom and I burst into tears and I looked at my mom and I never I’d never ever seen my relationship with her, my mom, as Chinese, portrayed on the screen. And I said is that what it’s like for you and she said yeah, that’s exactly high I feel when I look at you and I said the same and I want to give, I want to make that moment. I want to recreate that for someone else.

Danielle Brooks:​ I agree with her. When it comes to a lot of things I just agree. Because you know if I wanted to shy away from this character, Taystee because she was incarcerated and to me that was hitting on the line of stereotype and I was nervous about that and I’m so glad I stepped into this part because you get to tell the different side you never would have seen. But I also feel that way when it comes to plus size. I want to be the love interest. I want to put on makeup and look fabulous and have some man be doting over me. I want that. I want to be in a thriller movie. I want to be in an action movie. I can run up stuff. I can do that. You know? I don’t want to be limited because of my size. I don’t want people to feel that. I can’t do things because I am not attractive because of that because we all know that’s not true. We’re being silly but that’s what I want to see too.