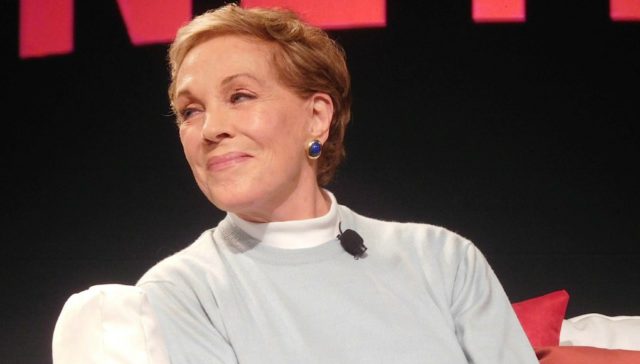 Netflix featured its many new female-centric shows at a press event Wednesday with an A-list of impressive talent, including Charlize Theron (Girlboss), Drew Barrymore (Santa Clarita Diet) and Brit Marling (The OA).

But no one was more eagerly awaited than Julie Andrews. The legendary actress stars in “Julie’s Greenroom,” which she created with her daughter Emma Watson Hamilton and Judy Rothman-Rote.

Andrews said of her desire to do the show, “I’ve long wanted to do a program on the arts both to convey the joy of the arts to children and to families and to just specialize in that,” adding, “Lisa is a longtime friend and said one day, “I wish we could do something together.”

Her character, Miss Julie, runs a theater and introduces the seven puppet kids to various aspects of the arts. Among the puppets there’s a mixture of characters, including one who is in a wheelchair. And there’s also a duck.

“You only really focus on the puppets – you don’t notice the puppeteers,” Andrews said, calling them “unsung heroes.”

Spike, one of the puppet kids, made a guest appearance, and with his frizzy hair and button eyes he’s definitely adorable.

Another big draw are the celebrity guests that appear on each show. Guests in upcoming segments include Josh Groban, Sara Bareilles, Idina Menzel, Ellie Kemper, Josh Bell and Alec Baldwin.

“It was a dream list,” said Andrews. “Some of them we knew about but people fell into place and had a ball,” Andrews said.

“Each episode of the series focuses on a different performing art form and once we knew what the focus of what each episode was going to be that was the hardest part. Then it who would be the dream person to teach  kids that,” said Hamilton, who at times would touchingly hold her mother’s hand.

Also each week will feature a new song composed by Broadway composers.

“We try to go for a wow moment at the end of each show,” said Andrews.

Alec Baldwin, Andrews said, “did very well. He didn’t think he could sing. He did a silly song but it was great fun!”

Carol Burnett Andrews said was the only guest who didn’t come as herself.

“She’s exactly what we’d hoped for and then what she adds is so brilliant,” Andrews said. “We just try to keep up with her.”

Andrews added, “She’s allergic to feathers, which of course with a duck in the theater, is not too good.”

Andrews also hums some tunes and sings a line or so, but she said matter-of-factly, “I don’t sing like I used to and everyone manages.”

Andrews was asked if she had thoughts about the way the episodes should be watched by audiences, with the moderator noting, “You could theoretically binge watch this show.”

“You will binge watch this show!” exclaimed Spike.

Among the joys of the show, “working with one’s daughter is a gift,” said Andrews. “You don’t expect that very much when she’s knee high and growing up.”

As the panel was wrapping up, Andrews told the audience, “Always bring a puppet with you wherever you go.”

Meanwhile the moderator, Jessica Shaw from EW Morning Life told the panelists, “The show is wonderful, all three of you – I’m sorry the four of you. I couldn’t see you I was looking forward,” she told Spike, whose head came up only to the couch.