Sorry I’m late getting this out, friends. Life has really been getting in my way this past year! I think all of you understand what I’m talking about.

I’ve been waiting for the Timeless premiere for some time now, with a lot of hype leading up to it (of course). Well, I watched it and … I want more.

The start was a little sloppy – not too much about why our bad guy, ex- NSA asset Garcia Flynn (the handsome Goran Visnjic) went into Mason Industries (time travel headquarters, if you will), shot up some people and vanished with the time machine. But at least we saw that it worked. Ha.

The three main characters are:

Lucy Preston (Abigail Spencer), a professor/historian trying to keep her mom’s legacy alive at her department and seeking tenure, is told by her boss that she probably won’t get it (the tenure). Upset, she goes home to her dying mother and her spirited sister, Amy. Together, she and Amy care for their mom. Amy tells Lucy, “Stop worrying about disappointing mom. Make your own future.” Nice support from sis.

Next we meet Rufus Carlin (Malcolm Barrett), a scientist, coder and soon to be time travel pilot. He has eyes for a co-worker and is pretty mellow.

Back at Lucy’s house, Homeland Security comes knocking on Lucy’s door saying they need her (things are moving fast here at the beginning). Reluctantly, she goes with them. She is put in a waiting room with Delta Force soldier Wyatt Logan (Matt Lanter) – hellooooo Wyatt.

Together they are taken to where the time machine is located, and Agent Denise Christopher (Sakina Jaffrey) tells them they have a mission. They also meet Connor Mason (Patterson Joseph). As you might imagine, Lucy is a little dazed. She doesn’t really know what’s going on, never mind the fact that they’re about to go time traveling to try and thwart Flynn.

Of course there is another time machine that the U.S. Government happens to have (a little corny, but okay, I’ll go with it – it’s a show), and the recruits are on their way to see what Flynn has in mind – May 6, 1937 – date of the Hindenburg disaster.

When they arrive at their destination, they go to a bar to look for Flynn. There, they meet Kate Drummond, a well known reporter for the Hearst newspaper. Wyatt is taken by her. Lucy tells Wyatt that Kate doesn’t have much time left because she dies in the Hindenburg explosion. Wyatt is disconcerted by her statement.

When the three amigos arrive at the airfield, they are surprised that Flynn doesn’t let the Hindenburg blow up. Instead, it lands safely. Rufus says to Wyatt, “Uh, that’s not suppose to happen, right?”

Lucy figures out that Flynn wants to blow up the Hindenburg on the flight out, killing many luminaries who will be onboard – many who have historical value.

After being caught snooping in an airplane hanger, the three are arrested and taken to jail, where Lucy presses Wyatt about his liking for Kate. He tells her she reminds him of his wife who died – and alludes to it being his fault. Poor Wyatt.

There is a funny scene in the jail when Rufus is trying to distract the police for Wyatt. He gives a passionate speech about black people in the future – Michael Jordan, Mike Tyson and even O.J. – even though everyone knows he did it. It was humorous.

They escape from jail and head back to the Hindenburg, where they manage to get onboard the vessel. Lucy and Rufus pose as members of Anarchist Black Cross (yep, I looked the group up) and demand that the ship land. Wyatt runs into Kate and explains what is really going on. They find the bomb in the kitchen and Wyatt disarms it after a fight with one of Flynn’s men.

The man shoots his gun off and the Hindenburg catches fire and crashes. The gang makes it out okay. Flynn and Lucy meet on the field, and Flynn warns her about why she is picked to do what she’s doing. She was picked for a reason. Flynn tells her to ask what Rittenhouse is and shows her a book that “she” wrote, but she says she didn’t. She is really scared and confused.

Wyatt sees Flynn, who grabs Lucy at gunpoint and Wyatt shoots. Meanwhile, Kate is behind Wyatt and takes the bullet that was meant for Wyatt. Oh no, not again! Wyatt and Lucy run to her, but of course, she dies … for a second time in history. 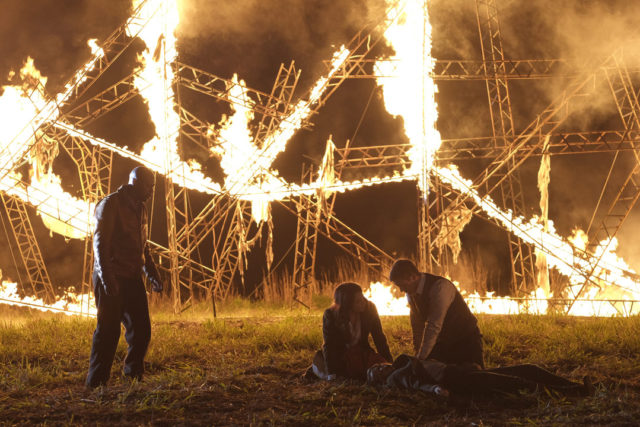 They return to the present and Mason Industries, where Agent Christopher and Connor Mason are waiting. Our team finds out that history was re-written – the Anarchist Black Cross was responsible for the Hindenburg crash (that would be weird). After they discuss Flynn’s possible motives, Lucy deduces that Flynn wants to “kill Americans in the crib.” He wants to rewrite history before it happens. Yikes. The agent tells them she will call them again when they’re needed. Lucy is surprised that she might have to go on another mission.

This is where the show gets more interesting. Lucy goes home to find her terminal mother in the kitchen cooking. She is stunned, but happy … I would be … until she realizes there is no “Amy” and that she, Lucy, is supposedly engaged. She is devastated about Amy and knows she has to fix what has happened, but how?

Rufus gave a recording of Wyatt and Lucy to Connor Mason (he asked for it – but why?).

What is Rittenhouse and what does it have to do with Lucy?

I can already see a chemistry between Lucy and Wyatt – a girl can hope, right?

Lucy to Wyatt: “You know we’re pretty much the same age, so you can stop calling me ma’am.”

Rufus (African American): “So, the back of the bus was amazing.”

Wyatt introducing Lucy to Kate: “This is my older sister Lucy.”

Lucy: “I’m Nurse Jackie and this is Dr. Dre. We are from General Hospital.”

I like that they’ve added some humor to it. It always adds some fun. That part reminds me a little of Bones, and like Brennan, Lucy is very smart (world class, as Agent Christopher noted).

While Timeless needs to work out some quirks, I enjoyed the cast, history and adventure. It’s in its infancy stage, and I look forward to seeing where it goes. I think it will be fun, and episode two is about the Assassination of President Lincoln – intriguing.

What did all of you think of Timeless? Will you keep watching? I will.