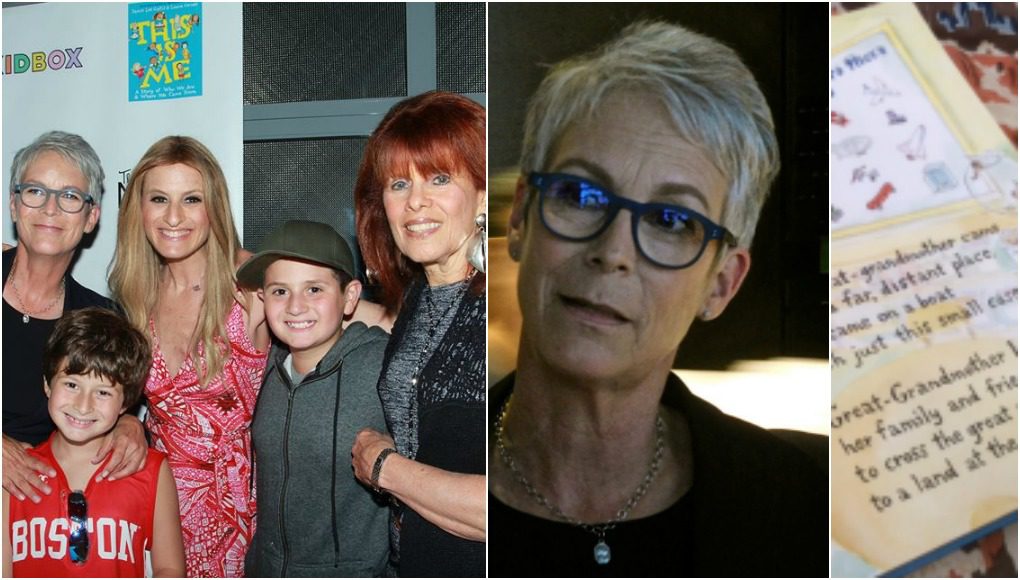 Jamie Lee Curtis celebrated the publication of her new children’s book, “This is Life,” last week at the Landmarc restaurant in the Time Warner Center with storytelling to a bunch of rambunctious and adorable children. Hosted by the terrific Moms, Denise Albert and Melissa Musen Gerstein, the Mamarazzi event was packed full of enthusiastic children running around the private back room to the delight of the “Scream Queens” star.

Wearing an elegant black pantsuit, the actress knows how to work a crowd of children and the more energetic and vocal the tykes became the more delighted Curtis appeared to be.

Chatting about her most recent book, “This Is Me,” published by Workman press, Curtis comes across as candid, fun loving, spunky and down to earth. The book’s subject is timely and asks children to imagine they have to leave their country and travel to another land with only one suitcase. What would they take?

The beautiful illustrations are by Laura Cornell. In the book, a child’s parents tell her: “Tomorrow we leave for a place far away. So fill up this case with the things you LOVE best. Sadly you’ll have to leave all of the rest.” The book ends with a pop up page of a suitcase and asks children to imagine what they would place into it.

Curtis said her book ideas just randomly pop into her head. She was thinking about her grandparents who came from Europe and wanted to write about the immigrant experience for children in a way they could understand. She wanted children to focus on “the things you love best and you’re sad you have to leave” and what you would “take in a small suitcase” if that was all the space you had.

“All of us came from somewhere else,” said Curtis. “This is a book for young children to start to learn a little bit about who they are through objects.” Curtis said the importance of these objects is not as merely a material thing in itself, but rather their significance intellectually and emotionally.

“In my suitcase it would not necessary be awards,” said Curtis. “It would be my first edition copies of ‘Go, Dog, Go!,’ which is my favorite book ever written, and ‘Do You Like My Hat?’” Curtis also included in that list “East of Eden” by John Steinbeck and other adult books that were meaningful to her.

Curtis comes from Hollywood royalty; her parents of course are the famous screen legends Tony Curtis and Janet Leigh. Gossip column fodder for the duration of their high profile relationship, Jamie Lee Curtis was only three years old when they divorced.

“I’m from a family of many divorces, many siblings and when I got married was the only time in my life that my entire family was in the room together,” said Curtis. “It was the gift I asked my father to provide for me, was to bring my siblings from wherever they were,” she said. “It was the first time my mother and my father had been in a room together in a long, long time.”

Curtis said of her wedding day to actor-director Christopher Guest, that the photograph of her entire family, including siblings, stepmothers and her parents, is what she would take in her suitcase.

“That picture represents something to me and that would be in there in my case,” she said. “It’s about identity, it’s not about show business, not about my accomplishments. It’s about my identity and what matters to me. You know, there’s not a Golden Globe in that suitcase. I don’t even know where they are. There’s nothing from show business. It’s not a book about material things. It’s your emotionalism and the connections we have.”

Curtis noted that her books, 13 in all, are written for first and second graders but always have something for adults, including a movie reference or two. In her book, “Where Do Balloons?” in the middle of the story she has a reference to Bates Motel with an illustration and sign that says, “Vacancy.”

“The children do not understand the significance of Bates Hotel but the adults immediately understand. They get the irony,” she laughed. “I write for both moms and dads, that’s my responsibility as a writer, as well as the children who are there for the music of the book and the illustration.”

After signing a gigantic stack of copies of “This Is Me,’ the spunky 57-year-old film and book veteran, gave a punkish grin, waved, and practically bounced out of the door.