Curious George is celebrating a big birthday! The precocious and lovable monkey has been delighting kids (and adults) for decades with his antics and adventures. This week, George turned 75—but he is still as youthful and full of energy as ever.

The beloved character was “born” in 1941, when the original tale of Curious George was written by H.A. and Margret Rey. After making his debut, George quickly became a storybook classic. Today, the collection of stories—including seven original titles written by the Reys—have sold more than 75 million copies around the world. And George has embraced the digital world, as he now has a popular app.

“We are proud to celebrate this magnificent milestone, and we cherish the joyful reading experiences that this mischievous, resourceful and curious little monkey has brought to generations of families,” says Ellen Archer, President, HMH Trade Publishing. “The genius and artistry Margret and Hans Rey created in Curious George have left an enduring legacy that we fully intend to be celebrating in another 75 years!”

Befitting such a momentous milestone, there are lots of festivities and honors planned to help George celebrate. 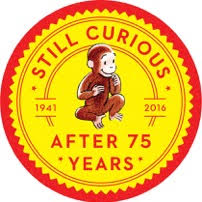 Nationwide Curiosity Day Events: September 17 has been designated National Curiosity day. Bookstores, libraries and organizations across the country will be holding special events this week.

#GetCurious: Beginning on Sept. 10, authors and illustrators, celebrities, politicians, and notable athletes who love George will wish him a happy birthday on Facebook, Twitter and Instagram.

Learn more about Curious George and his latest adventures here.