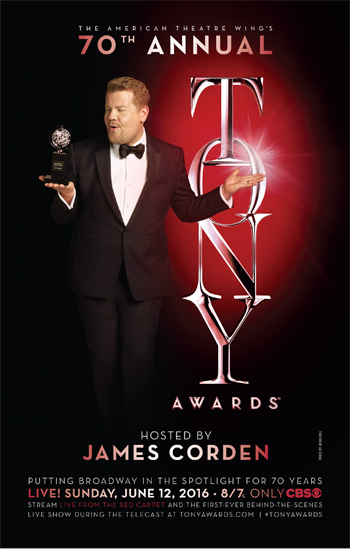 “My name is James Corden, and these are what I’ll be awardin’ – no, just you wait, just you wait.” Those were some of the parodied lyrics said by James Corden as he and the cast of “Hamilton” opened the 2016 Tony Awards – lyrics set to the rhythms of the opening number of that show everyone’s talking about.

Corden then joked that the show wouldn’t be all about “Hamilton” – there would also be commercial breaks. And indeed, it wasn’t exactly the “Hamiltony’s” as people had joked before the broadcast … but it was close.

Before that fun opening, Corden addressed the audience with a message about the horrific massacre in the wee hours this morning in Orlando, Florida, offering the theater community’s heartfelt condolences to those affected.

But then, the show continued with a great number that proved Corden can hold a candle to the likes of Neil Patrick Harris (big shoes to fill). James may not have Neil’s singing voice, but he’s nearly as nimble and certainly as entertaining. The number was also inspiring in and of itself, as Corden sang about being a kid in the audience at the theater dreaming that it could be him on stage.

Then, chorus members joined him on stage as he quickly moved between playing roles like Jean Valjean, the Phantom of the Opera, Danny Zuko, Sweeney Todd, Maria from “The Sound of Music,” Harold Hill, Fanny Brice, Sky Masterson, Annie, Grizabella, Evita, Tevye, Effie, and Rose. The number ended with the words, “To the boys and girls, transgenders too, to every Broadway would-be, don’t wonder if this could be you, it absolutely could be.” Watch below.

Of course, “Hamilton” was indeed the big winner of the evening. The show had a record 16 nominations, but in only 13 categories. In the featured actor and leading actor categories, it had multiple nominations, so without a tie in one of those categories, it could only win 13 times. The show lost in just two of its categories – leading actress and scenic design – which left it with 11 wins. “The Producers” had previously set the record with 12 wins, so “Hamilton” was just shy of tying the record. Still, far from shabby!

The big winner in the straight play categories was “The Humans” with four wins. Only three other shows took home two trophies – “The Color Purple,” “A View from the Bridge,” and “Long Day’s Journey into Night.” Every other show with a win took home a single trophy.

The actor categories for straight plays were won by four veteran white actors Frank Langella, Jessica Lange, Reed Birney, and Jayne Houdyshell, while all four actors in the musical categories were black – a milestone for the Tony’s. While Broadway still needs to be more diverse, it certainly beats the film industry in that regard. Three of the musical actor winners were from “Hamilton” – Leslie Odom, Jr., Renee Elise Goldsberry, and Daveed Diggs. Cynthia Erivo of “The Color Purple” edged out Phillipa Soo of “Hamilton” for lead actress.

Corden got in a couple of jabs at Donald Trump during the evening. One joke was that the Tony’s would be so diverse that Trump had threatened to build a wall around the theater. Later, Andrew Rannells appeared in a bad blonde wig as Trump, who was purportedly starring in “The Book of Moron.” But Hillary Clinton didn’t get by unscathed. Glenn Close appeared as Hillary in a spot from the show they called “The Clinton Line.” She sang words from “A Chorus Line” – “I really need this job, oh God, I need this job, I’ve got to get this job!”

An unusual and fun aspect of the show this year was a quick outdoor performance by the various casts throughout the evening, as they sang songs from other iconic shows. This started out with Steve Martin, Edie Brickell, Andrew Lloyd Webber, Lin-Manuel Miranda, Sara Bareilles, and Glenn Slater. (See my extensive interview with “School of Rock” lyricist Slater.)

Of course, “Hamilton” was the most anticipated performance of the evening. I was pleasantly surprised that they chose to perform “Yorktown,” as it’s probably a number that hasn’t yet been filmed, and it contains some of Alex Lacamoire’s best Tony Award-winning orchestrations.

Also giving stellar performances were the casts of “Shuffle Along,” “On Your Feet!,” “Bright Star,” “School of Rock,” “Waitress,” “She Loves Me,” “Fiddler on the Roof,” and “Spring Awakening.” Bebe Neuwirth performed a tribute to the long-running show, “Chicago” as well.

Several winners made reference to the shooting in Orlando, and I couldn’t help but hope that the show brought some solace to LGBT people around the world who were watching and remembering that the theater world accepts and loves them as they are. The most moving acceptance speech of the night was, not surprisingly, made by Lin-Manuel Miranda. He had composed a sonnet that included a tribute to his wife, as well as the words: “when senseless acts of tragedy remind us that nothing here is promised, not one day.” In tears, he said, “And love is love is love is love is love is love is love is love, cannot be killed or swept away.”

Of course, the evening’s most exciting moment was when “Hamilton” was announced as Best Musical – made all the more wonderful because it was presented by Barbra Streisand, appearing at the Tony’s for the first time since 1970.

While I wouldn’t say the 2016 Tony Awards show was the best in recent memory, it was certainly an entertaining evening, and Corden did an excellent job of being funny without offending anyone.

Below is a list of all nominees and winners:

Best Revival of a Play

Best Revival of a Musical

Best Book of a Musical

Best Leading Actor in a Play

Best Leading Actress in a Play

Best Leading Actor in a Musical

Best Leading Actress in a Musical

Best Featured Actor in a Play

Best Featured Actress in a Play

Best Featured Actor in a Musical

Best Featured Actress in a Musical

Best Scenic Design of a Play

Best Scenic Design of a Musical

Best Costume Design of a Play

Best Costume Design of a Musical

Best Lighting Design of a Play

Best Lighting Design of a Musical

Best Direction of a Play

Best Direction of a Musical