“Originally, we just thought that Gus needed a film made about him.” This is what director Maya Newell of “Gayby Baby” said during a recent Q&A after a screening of the Australian documentary. 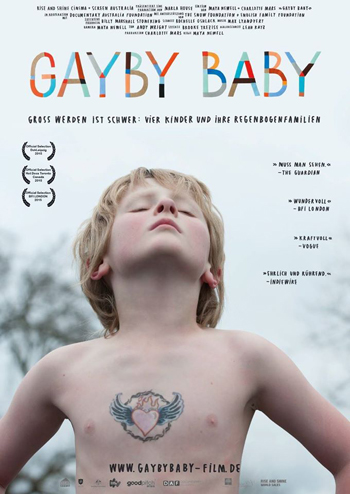 Gus is a boy who is a subject of the film – the son of a lesbian couple who is exploring his masculinity through on obsession with professional wrestling (the kind of wrestling that’s largely fake and for entertainment value). That’s Gus in the poster at right.

His interest is much to the horror of his non-violent moms, but they still try to support their son and even accompany him to a wrestling match.

This film, “Gayby Baby,” is only about Gus in part, however. It profiles four children with same-sex parents, and what it shows us more than anything else is that these families are just as normal as any other family. It’s only society’s view of them that makes them unusual. Maya, by the way, is herself a “gayby baby.”

Since commercial surrogacy is still illegal in Australia, only one of the families profiled consists of two dads. Gay adoption was illegal in most states until the last few years, and it remains illegal in three Australian states. As a result, it was difficult for the filmmakers to find male same-sex couples for the documentary.

Most of the male couples they found had children who were very young, and it was important to Maya and her producer, Charlotte Mars, that the children were old enough to make the decision to be in the film. They also wanted the film to be about how the children felt. Therefore, the kids needed to have the vocabulary to speak about their experiences. For this reason, the children profiled are at least ten years old.

Maya and Charlotte decided to make the film available to schools in Australia, but that decision proved to be problematic, as you can imagine. The biggest newspaper in the country ran a cover page story about how one of the schools had been inundated with parent complaints. The parents feared the film was promoting a “gay agenda.” There was also a column in the newspaper in which the writer commented on Ebony, one of the film’s young subjects.

Ebony says in the film that when she was younger, she worried that her mothers weren’t “normal,” and the columnist essentially said, “Yes, you aren’t normal.” According to Maya, Ebony responded by saying to her family and friends that one of her mothers has tattoos and piercings, so of course they aren’t normal, but that has nothing to do with her mother’s sexuality.

After the incident, the top government minister in Australia banned the film from being screened in any school during school hours. Protests ensued, politicians were polarized, and the movie became a national debate about children in same-sex families. Suddenly, some children from such families experienced bullying for the first time in their lives.

The first calls Maya and Charlotte made after the article came out were to the families profiled in the film, but the children were astoundingly calm. Gus was even excited to be on the front page of the newspaper.

In the end, according to the filmmakers, the supportive voices were louder and more numerous than the ones rallying against them. To protect everyone, however, they did something unusual, which is to invite the families to be part of the editing process. That way, the subjects could ensure that they were depicted in a way that was comfortable for them. The filmmakers felt this was especially important since children were involved.

The children also did at least one Q&A at a screening and enjoyed the attention very much. They have bonded with one another, even though one of the families now lives in Fiji.

The film was crowdfunded in Australia, and at the end of the credits is a long list of names of the people who contributed.

I highly recommend this documentary, which is a touching and informative look at what should be considered ordinary families – because, truly, what is “ordinary”? Unfortunately, the people who most need to see this film probably won’t watch it due to their own prejudices. But if it changes one person’s mind or helps others feel less alone, it will have done a great service.

You can watch the documentary now on iTunes, Amazon, and other online services.