“Little Boxes,” directed by Rob Meyer, is a sweet, realistic slice of life. While the drama is low key, I found myself very much engaged with this family that’s transplanted from New York City to the small community of Rome, Washington.

Melanie Lynskey (“Two and a Half Men”) plays an art professor who has a new job at a small college. She moves to “Rome” with her chef/writer husband, played by Nelsan Ellis (“True Blood”), and their middle school-aged son, played by Armani Jackson. While they are an interracial family, that fact is mostly incidental to the story of the film, which, in and of itself, is refreshing.

In one scene, Ellis’ character walks the neighborhood while listening to his iPod. I fully expected the cops to show up and profile him in this mostly white area, but it’s to the filmmakers’ credit that this doesn’t happen. That’s simply not what this movie is about, although the differences in race come up as a slight obstacle on occasion.

The family has a difficult time adjusting to their new lives, however. The parents begin to drink too much, they worry about the appearance of mold in their new house, and the boy gets involved with a couple of girls who aren’t the best influence. One of those girls is played by Oona Laurence, who was Matilda on Broadway in the musical of the same name.

“Little Boxes” was written by Annie Howell, and I interviewed Meyer in 2013 when his film, “A Birder’s Guide to Everything,” was in the Tribeca Fest. Like many indie films, the dramatic arc doesn’t arc too high, but it’s the kind of family we rarely see on screen – certainly not portrayed in this realistic way. And it’s rare to see a film in which a family faces normal challenges and comes together to overcome in a way that’s believable.

Obviously, Netflix agrees with me about the film, as it acquired worldwide rights for $1.5 million to stream it, according to Variety.

“Children of the Mountain” couldn’t be more different from “Little Boxes.” Certainly, it has a steep dramatic arc. 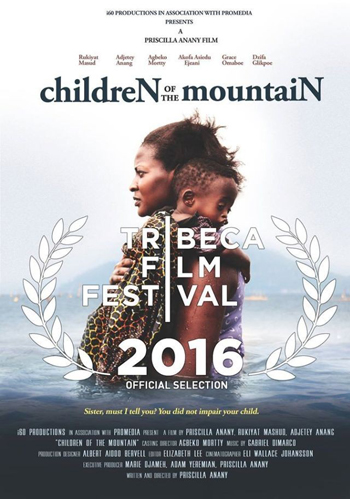 Set in Ghana, the story evolves around Essuman, played by Rukiyat Masud, who gives birth to a deformed baby. The community, as well as the baby’s father, rejects her, and Essuman goes off in search of a cure for her child.

Written and directed by Priscilla Anany, the film is a lyrical and moving story that is well-acted, directed, and shot. Understandably, it was an Audience Award runner-up at the Festival.

While there is no trailer yet for “Little Boxes,” you can view the trailer for “Children of the Mountain” below. I recommend it if you have a chance to see it.