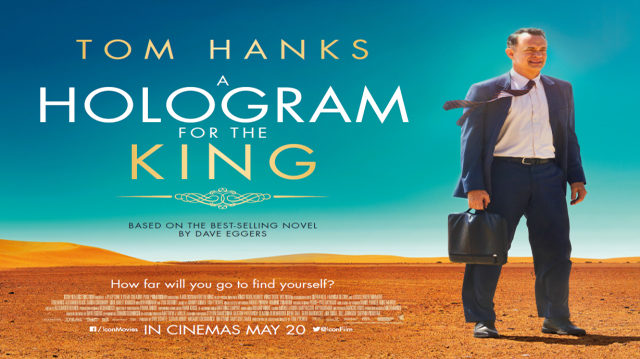 On the one hand, Tom Hanks’ latest film, “A Hologram for the King,” directed by Tom Tykwer (“Cloud Atlas”), is a return to the comic work of his early career. On the other hand, the film is a departure for him in that its script (adapted by Tykwer from Dave Eggers’ book) is inferior to the majority of Hanks’ later films.

That said, “A Hologram for the King” is entertaining and unpredictable. Not having read Eggers’ book, I didn’t know what to expect.

Hanks plays Alan Clay, a middle-aged everyman who is trying to prove to his ex-wife, daughter, and boss that he’s still got it. He’s tasked with presenting holographic technology to the King of Saudi Arabia and trying to convince the royal to invest. When he arrives in the Kingdom, however, nothing goes exactly as planned.

His team is stuck in a tent with no Wi-Fi and, at some point, no air conditioning, until he happens upon the man he was supposed to meet days before. The King may or may not arrive at any point, and to make matters worse, Clay has a small but mysterious lump developing on his upper back.

Alexander Black puts in a great comedy performance as Clay’s driver, and Sarita Choudhury (whom I interviewed last year for “Learning to Drive”) plays a female doctor who tends to Clay’s lump in a country where female doctors are few.

Since, as I said, I have never read the book, I was surprised by the story’s trajectory. While it held my interest throughout, I found the film to be uneven – the beginning and end have different tones – but it’s an unusual and interesting movie with excellent work from the entire cast. Don’t expect to get a real idea of what life is like in Saudi Arabia, though. I doubt seriously that the film, which was actually shot in Morocco, is accurate.

Shown at the 2016 Tribeca Film Festival, “A Hologram for the King” is already playing in theaters.