Gayle Kirschenbaum‘s very personal documentary, “Look At Us Now, Mother,” is a comic and touching look at her difficult relationship with her mother, Mildred. In the film, the two of them intermittently bicker and hug, and we learn about Gayle’s rocky journey toward forgiveness.

In a number of reviews, Gayle’s mother has been called a “monster.” Certainly, she was cruel at times, and she “has no filter,” as Gayle puts it. She even found Gayle’s diaries and thought nothing of sharing them with others. But remarkably, this award-winning filmmaker has managed to forgive her mom and develop a relationship that’s so close, the two of them have traveled around the world together, even though Mildred is in her 90’s.

I sat down with Gayle in New York over lunch, and we talked about why she made the film and what she hopes it will achieve. (Full disclosure: I’m friends with Melissa Jo Peltier, who served as co-producer of the documentary.) 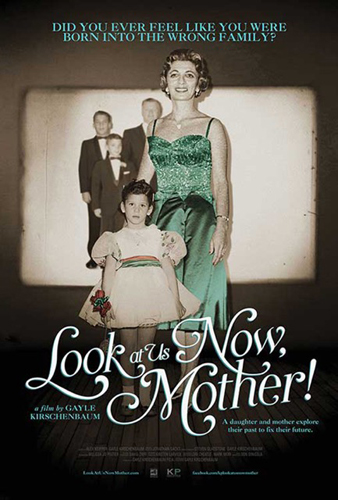 Gayle on why she wanted to make the film:

After that time, I said to my mother, “You’ve always wanted me to have a nose job. I will go to see plastic surgeons with you as long as I can have a camera crew.” And she couldn’t care less if I would have a camera crew with me. And lo and behold, I ended up making this little funny short [“My Nose“].

I never expected this little short to have such a big life and speak to so many people. It won an award. I didn’t even know it was in a competition with major other films. It was just a little homemade short….

I was getting swamped by the people afterwards, saying “I love your nose. Don’t touch it. I can’t stand your mother…. Let me tell you my story.” I started hearing everybody’s story, and that’s when I was coaching people, just sitting there, just telling them how to let go of this anger.

Someone witnessed this and said, “You have to do a seminar.” I’m like, “A seminar? I’m a filmmaker. What kind of seminar?” So, that’s when I developed what I call “The 7 Healing Tools,” and I started doing these seminars.

Then, I heard more and more stories. And I said, “Oh, my God, you know what? It doesn’t matter if on the outside somebody is successful. It doesn’t matter how rich or famous you are, or [how many] lovers or spouses or children and grandchildren you have. If you were hurt by somebody really close to you – generally a parent – when you were young, and you have not forgiven them – and they could be long dead – and you’re still walking around with that anger and resentment, it is affecting you, it’s affecting your relationships, it’s affecting your health.

So, when the nose film played in Washington, DC., we ended up on the cover of the Washington Post … and the journalist’s line was, “If you have a mother like Gayle Kirschenbaum, you’d better get yourself into psychoanalysis.” So, my mother read it and went, “Great! Bad press is better than no press. I’m on the cover of the Washington Post.” So, long story short, I ended up realizing she had a thick shell….

I realized I was tapped to do this job because no one else (a) would have a funny, smart, and willing mother, (b) also open as I am, and a storyteller which I am, and have a huge archive which I have. So, it was sort of like my mission, my unexpected mission, to make this film and go on this journey with my mother to help people.

On the emotional journey she took while making the film:

It was the hardest thing I’ve ever done, and I got sick making it because I relived everything. Once I found my childhood diaries, I relived it all…. It was intense. I was a pin cushion. I just had to walk out with sunglasses on every day because anything would trigger me. I’d see a homeless person – I’d be a mess. I’m still in recovery from making the film.

On the forgiveness movement that she’s hoping will come out of the documentary:

My mission was to use it to help people and use it as the centerpiece of a movement focused on forgiveness and healing, which is what we’re building. Because I realized so many people are hurting….

On what happens after the Q&A’s for “Look At Us Now, Mother”:

Nobody wants to leave the Q&A. Everyone’s open now. It’s like group therapy. Q&A’s are limited in time, so that’s a challenge. It’s very interesting because people then hover around me, eager to tell me their story so I will hopefully help them….

I’m not a trained psychologist. I didn’t study this. I’m just a person who had a very challenging childhood, and I figured it out. [People say,] “Yes, that’s why this is great!” I think people appreciate personal experience over degrees.

On the difficulties and importance of forgiveness:

One thing I noticed from other women who had, let’s say, a mean mother, is that they all haven’t forgiven their mother because their mother never said they’re sorry, never acknowledged they did anything wrong. I said, “You’re like asking Stevie Wonder to drive a race car!”…

You forgive for yourself. You don’t forgive for anybody else. You do it for yourself. Once you have the ability to forgive, you can get out of victimhood because as long as you hold onto that anger and resentment, you actually give your power away….

On her relationship with her mother now:

Today, my mother and I have an amazing relationship. Everyone’s saying we should have a reality show because we go at it. First of all, she’s smart as can be, and she’s fast and she’s funny. And the one-liners come out of her…. We fight the most when I’m driving, and we’re going somewhere. She has the worst sense of direction – like the worst! Particularly when we’re traveling in a car, and we’re in another country. She’ll think she knows where she’s going and be very insistent.

On what’s next for Gayle:

I think if I make films, they’ll probably be based on this content. This is a new life for me. I’m reinventing myself. Or life has reinvented me. People have reinvented me.

“Look At Us Now, Mother” opens in South Florida in Boca Raton, Delray, and Tamarac on March 25, 2016, and in New York at the Village East and Los Angeles at the Laemmle Monica Film Center in Santa Monica and Town Center 5 in Encino on April 8, 2016. Other cities will follow. Gayle and Mildred will appear at select screenings for Q&A’s.

LOOK AT US NOW, MOTHER! Trailer from Gayle Kirschenbaum on Vimeo.