Hallmark’s series, “When Calls the Heart,” returns for season 3 this Sun., Feb. 21, 2016 at 9/8c (check out the show’s official site here). I had a chance to chat with Australian actor Daniel Lissing, the male lead on the show, about his character, Jack Thornton.

Jack is a Mountie who is the beau of Elizabeth Thatcher, played by Erin Krakow. Also in the cast are Lori Loughlin and Jack Wagner. The show, which is set in 1910, is shot in Vancouver, Canada.

Below are some of the highlights of my fun conversation with Daniel:

What are you allowed to tell us about what we can expect in season 3?

I’m not allowed to tell you a thing … no, I’m just joking! Look, I really feel like in season 3 – as far as the show is concerned and the writing is concerned – I think we’ve found our rhythm. I really think we’ve got back to the real heart of the show….

Our characters – the great storylines – seem to be progressing nicely. This season is such a good balance, I think, of drama, romance, adventure, and all that heartwarming stuff with the kids….

The general consensus is that the season just gets stronger and stronger as it goes along. I felt that way shooting it, so I just feel like there’s going to be really beautiful moments through season 3.

The audience is going to really like the storylines, and of course, Jack and Elizabeth are getting to a place in their relationship and healing from the misunderstanding toward the end of season 2 where they were like, “What is this? Can our two worlds fit together?” Through season 3, I think they really make a decision, “You know what? You’re my girl” and I’m her guy. We just get about the business of living in Hope Valley. Our relationship is much more solid in this season.

You’ve seen more than me then. I struggle to watch myself, to tell you the truth.

I used to be an actor. I know exactly what you mean.

I really find it difficult to watch myself, and if I ever do it, I’m a little overly critical. 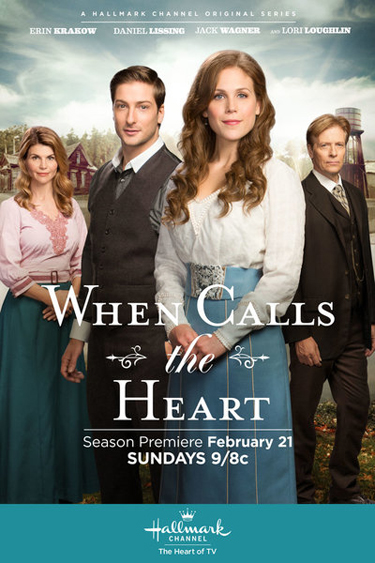 It’s hard not to be, I think. Are you live tweeting on Sunday night?

If I can find a television with the Hallmark Channel on it because I don’t have a TV. I’ll have to go over to a mate’s place. I’m going to call Lori and Erin and see if we can all get together and live tweet together. That would be fun. No promises, but that’s the plan.

I spoke with Erin during season one, and we talked about the difficulties of portraying that time period. Especially for the women, just the clothing alone is a huge obstacle. What’s the hardest part for the men?

It’s fun. There’s nothing hard about it. The only thing that I really struggle with is the weather. When you’re outside for 16 hours a day in freezing cold mud in the middle of winter, you just spend so much energy trying to stay warm and dry. Then, having to do these scenes outside, and everything’s really happy, and you’re like, “I just really need to be inside and warm right now.” [Laughter]

If there is a season 4, we really should take advantage of the beauty up there in Canada for the spring and summer months. You’ll get much happier actors – warmer actors, I should say, because we’re pretty happy on set. We’ve got such a good family and such a good crew up there. Everyone gets on like a house on fire….

That’s the only thing that’s kind of problematic for me because growing up in Australia, I don’t really handle the cold so well, especially when you’re dressed in period clothes and you’re talking with an accent other than your own and your mouth is frozen. It’s so cold outside, and I struggle to talk full stop, let alone in character. [Laughter]

Speaking of that, is the American accent fairly easy for you?

Yeah, it is now … when it’s not freezing cold! … I feel like my Standard American accent is pretty perfect. I worked really hard to make sure that … as an actor, you have to be believable, especially with an accent.

That’s 101 stuff. If your accent is off, it doesn’t matter what else you do. The audience is already out of it if they’re noticing accent flaws. It takes them out of the moment from what the character’s trying to say. I think it’s really important for foreign actors to come over to the States and really nail the accent.

And I get annoyed with myself if ever I’m on set and I slip off a word. I’m like, “Hang on, guys, let me take that again.”

Yeah, I guess it’s easy to do every once in a while, especially if you’re cold.

I watched your short film, “Answers,” last night, and I loved it. I thought it was so intriguing. You’re working on turning it into a feature?

That’s exactly right. The stuff that I do outside of Hallmark is very … not Hallmark, you know what I mean? I sort of have different sensibilities with the stuff that I’m creating at the moment.

That was a true passion project. It was my first attempt at making anything, and we’re getting a really good response…. We’re meeting production companies, and we’ve got the story down for the feature version. We really want to make that this year before season 4 starts again. So, that’s my project at the moment.

Well, that’s what we’re trying to do. You never know with this industry, especially if you’re doing independent stuff. I think that’s what this is going to end up being because I’m not a huge name actor, and Mike [Goode]’s not a huge name director or anything.

So, to get funding when you’re relatively unknown in the big scheme of things can be … you’re better off making it for a reasonable amount of money and then trying to do the [film] festival route….

We just want to make things that connect with people, that are heartfelt, that are kind of universal themes where most people that watch it can relate.

Well, I’ll be very interested to see how you flesh it out. Next question: I told you that I used to be an actor. When I watch a TV show or movie, I sometimes say, “I’d like to play that.” What roles have you seen that made you say that?

I’m such a film buff and a TV buff. I just really love that form of storytelling, so I must see something every week where I’m like, “Ahhhhh! Oh, man, I really want to do that!” When I see these films with guys around my same age, that’s the goal – like “The Revenant,” for example.

Those kind of roles – I like seeing actors put through their paces. I really like seeing people digging deep for their characters, and I like challenging roles – physically and emotionally. For me, that kind of stuff really speaks to me.

Well, why shouldn’t you be? Someone asked me to ask you what your favorite U.S. states are so far.

Oh, that’s a great question because I’m going to travel a fair bit this year. I plan on going to Louisiana. I’ve never been to the south, and one of my dream destinations is for sure New Orleans.

You will be in heaven. It’s wonderful.

That’s good to hear. I’m so excited…. Where have I been? I’ve been to Colorado. So beautiful. I love Colorado. I just think it’s so stunning. New York, California, Oregon, and Washington because I’ve driven up [to Vancouver to shoot “When Calls the Heart”] and back a couple of times. It’s such a tough question. I just love the States.

Obviously, I’ve been to Hawaii as well. It’s so hard to compare because they’re all different. But I live in California. I really love driving up the coast of California. Right now, I totally can’t choose. Don’t put me on the spot like that! I just love America, and I want to see much more more of it as the years go by and I live here for longer periods of time.