If you’re wondering when “Marvel’s Jessica Jones” or “Orange Is the New Black” is coming back to Netflix, here’s the scoop. Still no word on “Bloodline,” so I’m impatiently waiting for word on that one. All I’ve heard is that it will be back sometime this year.

Let’s take a closer look at the premiere dates, casting and more on upcoming Netflix titles.

Black Mirror: British star Gugu Mbatha-Raw (Beyond the Lights, Concussion and Doctor Who) and Canada’s Mackenzie Davis (The F Word, Halt and Catch Fire and The Martian) have been cast in lead roles in one of the episodes of the Netflix original series Black Mirror. Owen Harris (Kill Your Friends) will direct the episode. Created and written by Charlie Brooker, the series is produced by House of Tomorrow, and Charlie Brooker and Annabel Jones serve as executive producers. 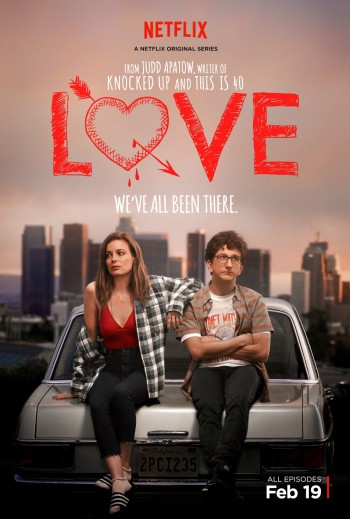 Flaked – Premieres globally Friday, March 11, 2016 at 12:01 am PT. Flaked is the serio-comic story of Chip, a celebrated long-time resident of the insular world of Venice, California who falls for the object of his best friend’s fascination. Soon the tangled web of half-truths and semi-bullshit that underpins his all-important image and sobriety begins to unravel. Five-time Emmy Award nominee Will Arnett plays Chip, a man doing his honest best to stay one step ahead of his own lies. The series also stars David Sullivan, Ruth Kearney and George Basil. Executive producers Will Arnett and Mark Chappell (The Increasingly Poor Decisions of Todd Margaret) co-created and co-wrote the 8-episode series. Ben Silverman(Founder and Chairman of Electus), Peter Principato and Mitch Hurwitz (Arrested Development) also serve as executive producers on the show. Electus and Principato-Young are providing production services. Flaked is a Netflix production.

The Ranch – First 10-episodes premiere globally Friday, April 1, 2016 at 12:01 am PT. Set in present day on a Colorado ranch, this multi-camera comedy series stars Ashton Kutcher, Danny Masterson, Sam Elliott and Debra Winger. The show follows Colt’s (Kutcher) return home after a brief and failed semi- pro football career to run the family ranching business with his older brother Jameson “Rooster” (Masterson) and father Beau (Elliott), whom he hasn’t seen in 15 years. Winger stars as Colt’s and Rooster’s mother, Maggie, who runs the local town bar. The Ranch is executive produced by Don Reo (Two and Half Men, My Wife and Kids) and Jim Patterson (Two and a Half Men, Mike and Molly). Kutcher and Masterson serve as executive producers and co-executive producer respectively.

Lost & Found Music Studios – Premieres globally on Friday, April 1 at 12:01 am PT. As part of the expanding slate for tweens and teens, Lost & Found Music Studios is a live action series about a group of talented teenage musicians who struggle to find their authentic sound and place in the world as they hone their craft at a prestigious music studio. In each episode, young artists navigate the ups and downs of the music industry, as they find their way to love, inspiration, and redemption. After all, the next hit song could be just one heartbreak away.

Unbreakable Kimmy Schmidt – Second installment premieres globally Friday, April 15, 2016 at 12:01 am PT. After living in a cult for fifteen years, Kimmy (Ellie Kemper – The Office) decides to reclaim her life and start over in New York City. Armed with just a backpack, light-up sneakers, and a couple of way-past-due library books, she’s ready to take on a world she didn’t even think existed anymore. Wide-eyed but resilient, nothing is going to stand in her way. She quickly finds a new job (working for 30 Rock’s Jane Krakowski), a new roommate (Tituss Burgess – 30 Rock), and a new beginning. The cast also includes Lauren Adams, Sara Chase, Sol Miranda and Emmy winner Carol Kane (Taxi, The Princess Bride). The first season of this acclaimed comedy was nominated for an Emmy award.

Kong: King of the Apes – Premieres globally on Friday, April 15, 2016 at 12:01 am PT. This animated TV series for kids from Executive Producer Avi Arad, this is a fresh and modern take on the classic King Kong story. Set in 2050, KONG is still the strongest creature ever born with many human traits that make him the ultimate iconic hero. In KONG, the future looks bright for San Francisco’s Alcatraz Island since its transformation into the most impressive Natural History and Marine Preserve on the planet. But when the star attraction suddenly goes ape and KONG becomes public enemy number one, the villain that framed him is free to unleash an army of gigantic robotic dinosaurs on the unsuspecting world. Ironically, KONG is the only force formidable enough to stop these super-powered dinosaurs and the evil genius manipulating them. But KONG is now the world’s most hunted fugitive. Fortunately, there are three young humans who know the truth and are willing to risk their lives to help KONG evade capture, while he battles to save humankind.

Marseille – Premieres globally Friday, May 5, 2016 at 12:01 am CET. As the municipal elections approach in Marseille, Robert Taro, the city’s Mayor for the last twenty years, prepares his last coup: push through the vote for the construction of a casino in the historic center of the Marina. Nothing has been left to chance, and his successor, Lucas Barrès, is already designated. But the latter’s all-consuming ambition and the secret interests of the city’s leaders, whether they come from its opulent villas or from the cities of the northern suburbs, impede the Mayor’s plans. The race for Mayor becomes a power struggle where no holds are barred. Only one question arises: how far will they go? The cast includes Gérard Depardieu (Robert Taro), Benoît Magimel (Lucas Barrès), Géraldine Pailhas (Rachel Taro), Nadia Farès (Vanessa d’Abrantès), Stéphane Caillard (Julia), Jean-René Privat (Cosini), Guillaume Arnault (Eric), Hedi Bouchenafa (Farid), Carolina Jurczak (Barbara), and Nassim Si Ahmed (Selim). Marseille is written by Dan Franck who serves as Executive Producer. Florent Siri (‘Cloclo’), director of episodes 1-4, also serves as Executive Producer. Thomas Gilou is the director of episodes 5-8. Marseille is produced by Paris-based Federation Entertainment, led by Pascal Breton, producer of the hit French series Dolmen and Sous le Soleil.

Grace and Frankie – Second installment premieres globally Friday, May 6, 2016 at 12:01 am PT. Jane Fonda and Lily Tomlin star as Grace and Frankie, two women whose lives are suddenly turned upside down when their husbands, played by Martin Sheen (“Robert”) and Sam Waterston (“Sol”), reveal they are gay and leave them for each other. Both sparring partners and partners-in-crime, they form an unlikely bond to face an uncertain future together and discover a new definition of “family,” with laughter, tears and plenty of mood enhancers along the way. From executive producers Marta Kauffman (Friends) and Howard J. Morris (Home Improvement), the hilarious and heartbreaking comedy takes on aging with gusto – from joint pain to joint rolling and blind dates to night blindness – and offers a poignant look at how life’s turning points show us who we really are. The series also stars Brooklyn Decker, Ethan Embry, Baron Vaughn and June Diane Raphael. In addition to Kauffman and Morris, the series is also executive-produced by David Ellison, Dana Goldberg and Marcy Ross from Skydance Productions, along with Paula Weinstein and Fonda and Tomlin.

Word Party – Premieres globally on Friday, June 3 at 12:01 am PT. A vocabulary building show for preschoolers from The Jim Henson Company,Word Party follows four adorable baby animals as they sing, dance and play. The show invites our youngest viewers to help teach the baby animals new words, learn these new words themselves, and even celebrate these achievements with a “Word Party!” Word Party is produced using the groundbreaking Henson Digital Puppetry Studio, a proprietary technology from Jim Henson’s Creature Shop that allows puppeteers to perform digitally animated characters in real time – enabling the animation to be more lifelike and spontaneous.

Stranger Things – Premieres globally Friday, July 15, 2016 at 12:01 am PT. The new drama series written and directed by Matt Duffer and Ross Duffer (Wayward Pines,Hidden) consists of eight, one-hour long episodes. In the series, a young boy vanishes into thin air. As friends, family, and local police search for answers, they are drawn into an extraordinary mystery involving top secret experiments, terrifying supernatural forces, and one very strange little girl. The series, set in Indiana, is a love letter to the ‘80s classics that captivated a generation. Stranger Things stars Winona Ryder (Show Me a Hero), David Harbour (Suicide Squad), Finn Wolfhard (The 100, Aftermath, The Resurrection), Millie Brown (BBC’s Intruders,Once Upon A Time, NCIS), Gaten Matarazzo (The Blacklist), Caleb McLaughlin (The Lion Kingon Broadway), Noah Schnapp (Bridge of Spies, The Peanuts Movie), Natalia Dyer (After Darkness, Hannah Montana: The Movie), Charlie Heaton (Shut In, Urban and the Shed Crew), and Matthew Modine (Weeds, Proof). The Duffer Brothers are writing, directing and showrunning the series, and will serve as executive producers along with Shawn Levy and Dan Cohen via their 21 Laps entertainment banner (The Spectacular Now, Night At The Museum, Real Steel, Date Night). Stranger Things is a Netflix production.

The Get Down — Part-one premieres globally Friday, August 12, 2016 at 12:01 am PT. The first six episodes of Baz Luhrmann’s all-new music-driven drama, from Sony Pictures Television, will focus on 1970s New York City – broken down and beaten up, violent, cash strapped — dying. Consigned to rubble, a rag-tag crew of South Bronx teenagers are nothings and nobodies with no one to shelter them – except each other, armed only with verbal games, improvised dance steps, some magic markers and spray cans. From Bronx tenements, to the SoHo art scene; from CBGBs to Studio 54 and even the glass towers of the just-built World Trade Center, The Get Down is a mythic saga of how New York at the brink of bankruptcy gave birth to hip-hop, punk and disco — told through the lives and music of the South Bronx kids who changed the city, and the world…forever. Luhrmann, director of Moulin Rouge!, Romeo + Juliet, and The Great Gatsby, will direct the first episode and serve as executive producer, overseeing all creative aspects of the show. Joining him on the creative team are four-time Academy-Award winner Catherine Martin (The Great Gatsby, Moulin Rouge!), along with Pulitzer Prize-winning writer Stephen Adly Guirgis (The Motherf***er With The Hat) and hip-hop historian and writer Nelson George, and a trio of the pioneers of hip-hop: Grandmaster Flash, DJ Kool Herc, and Afrika Bambaataa, each of whom will also be portrayed on the series. The cast includes Shameik Moore, Justice Smith, Herizen Guardiola, Skylan Brooks, Tremaine Brown Jr., Yahya Abdul-Mateen II, JImmy Smits, Giancarlo Esposito and Jaden Smith.