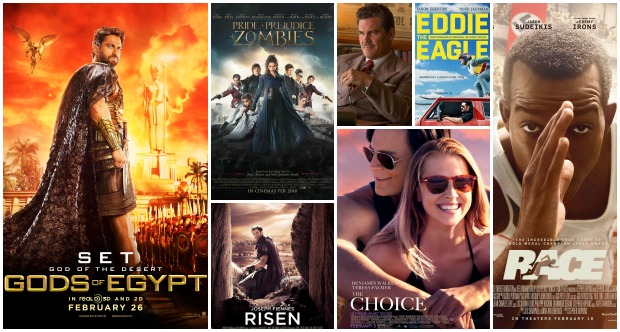 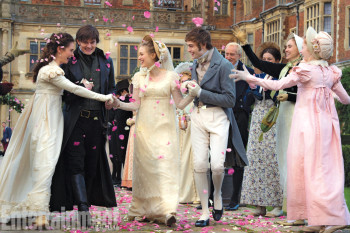 Nicholas Sparks! George Clooney! Jane Austen! Zombies! All this and more are coming to theaters this month. Here’s a sneak peek at new movies in theaters and on DVD and Blu-ray in February. Note that release dates are subject to change.

PRIDE AND PREJUDICE AND ZOMBIES

PG-13 for zombie violence and action, and brief suggestive material | In Theaters 2/5 | Ok for Kids 14+ | Screen Gems/Sony | Reel Preview: 3.5 of 5 Reels | Pride and Prejudice and Zombies

A zombie outbreak – yes, really! – has gripped the land in Jane Austen’s classic tale of the tangled relationships between lovers from different social classes in 19th century England. Feisty heroine Elizabeth Bennet (Lily James) is a master of martial arts and weaponry, and the handsome Mr. Darcy (Sam Reilly) is a fierce zombie killer (but still the epitome of upper class prejudice, of course).

As the outbreak intensifies, our heroes must join forces on the blood-soaked battlefield. Directed by Burr Steers, this movie also stars Lena Headey, Jack Huston, Bella Heathcote, and Matt Smith.

Another Nicholas Sparks movie, just in time for Valentine’s Day. When feisty medical student Gabby Holland (Teresa Palmer) moves next door to perennial ladies’ man Travis Parker (Benjamin Walker), it sends them both on a romantic journey neither dreamed possible. After a whirlwind courtship, Gabby and Travis wed and build a family together, making every decision hand-in-hand until one of them is forced to make the most important choice of their life alone (keep the Kleenex handy).

A poignant celebration of love, marriage and family that explores the most heart-wrenching question of all: how far would you go to keep the hope of love alive? Directed by Ross Katz, this movie also stars Maggie Grace, Tom Welling and Tom Wilkinson.

Based on the incredible true story of Jesse Owens (Stephan James), this movie follows the legendary athletic superstar on his quest to become the greatest track and field athlete in history. Along the way, he’s thrust onto the world stage of the 1936 Olympics, where he faces off against Adolf Hitler’s vision of Aryan supremacy.

“Race” is an enthralling film about courage, determination, tolerance, and friendship, and an inspiring drama about one man’s fight to become an Olympic legend. Directed by Stephen Hopkins, this movie also stars Jason Sudeikis, Jeremy Irons, Carice van Houten and William Hurt.

Directed by Kevin Reynolds, “Risen” is the epic Biblical story of the Resurrection, as told through the eyes of a non-believer. Clavius (Joseph Fiennes), a powerful Roman Military Tribune, and his aide Lucius (Tom Felton) are tasked with solving the mystery of what happened to Jesus in the weeks following the crucifixion, in order to disprove the rumors of a risen Messiah and prevent an uprising in Jerusalem. Also stars Cliff Curtis and Peter Firth.

Directed by Dexter Fletcher and inspired by true events, this feel-good story follows Michael “Eddie” Edwards (Taron Egerton), an unlikely but courageous British ski-jumper who never stopped believing in himself – even as an entire nation was counting him out. With the help of a rebellious and charismatic coach (Hugh Jackman), Eddie takes on the establishment and wins the hearts of sports fans around the world by making an improbable and historic showing at the 1988 Calgary Winter Olympics.

In this action-adventure directed by Alex Proyas and inspired by the classic mythology of Egypt, the survival of mankind hangs in the balance as an unexpected mortal hero Bek (Brenton Thwaites) embarks on a journey to save the world and rescue his true love. He must enlist the help of the powerful god Horus (Nikolaj Coster-Waldau) in an unlikely alliance against Set (Gerard Butler), the merciless god of darkness who has usurped Egypt’s throne, plunging the once peaceful and prosperous empire into chaos and conflict. 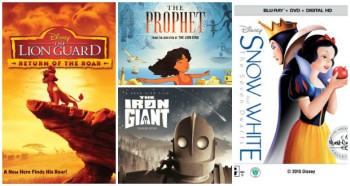 Rated PG for thematic elements, including some violence and sensual images | On DVD & Blu-ray 2/2 | Ok for Kids 7+ | Reel Review: 4 of 5 Reels | Buy on Amazon

From the director of “The Lion King” comes this new animated classic, based on one of the most beloved and bestselling books of all time. In a Mediterranean seaside village, Kamila (Salma Hayek) cleans house for exiled artist and poet Mustafa (Liam Neeson), but the more difficult job is keeping her free-spirited young daughter Almitra (Quvenzhané Wallis) out of trouble. The three embark on a journey meant to end with Mustafa’s return home – but first they must evade authorities who fear that the truth in his words will spark rebellion.

Special Features: Digital and ultraviolet copies of the movie; Animating “Kahlil Gibran’s The Prophet”; An Interview with the Filmmakers; Animatic.

SNOW WHITE AND THE SEVEN DWARFS

You know the story: the kind and beautiful princess Snow White wins the hearts of the Seven Dwarfs and triumphs over the evil plans of a wicked Queen. Now in High Definition Blu-ray and for the first time on Digital HD, this classic Disney film is one of the best animated films of all time.

It’s October, 1957, and 9-year-old Hogarth Hughes (Eli Marienthal) lives in the seemingly idyllic town of Rockwell, Maine. Hearing stories of a UFO that crashed into the sea, Hogarth, always on the lookout for mutant aliens, finds a huge, metal-eating robot (Vin Diesel) with an insatiable curiosity and equally insatiable appetite. But the extraterrestrial’s presence unleashes a wave of Cold War paranoia that threatens to engulf Rockwell unless Hogarth and his 50-foot friend can stop it. Acclaimed animation director and writer Brad Bird brings his creative talents to this unique tale of two heroes. Also stars Jennifer Aniston, Harry Connick Jr. and Cloris Leachman.

THE LION GUARD: RETURN OF THE ROAR

Meet Kion, second-born cub of Simba and Nala (“The Lion King”), as he assumes the role of leader of “The Lion Guard,” an elite team of animals tasked with preserving the Pride Lands. Follow him as he assembles a group of unlikely heroes, including Bunga the honey badger, Fuli the cheetah, Beshte the hippo, and Ono the egret. Bursting with humor, music, beloved characters and heart, this movie is fun for the whole family. Voices include Madison Pettis, Rob Lowe, James Earl Jones, Max Charles and Sarah Hyland. Special Features include Beau Black’s music video, “Here Comes The Lion Guard.”