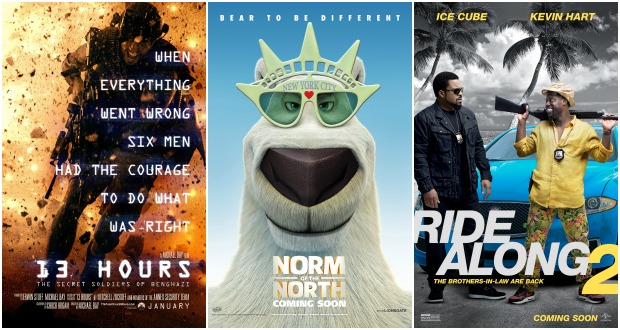 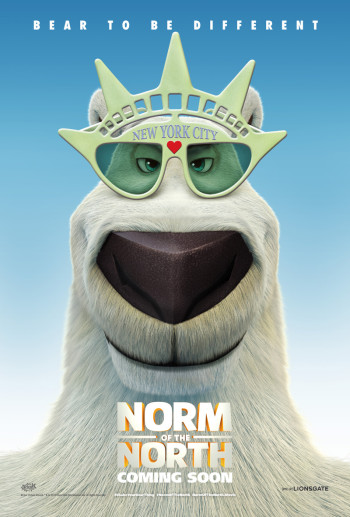 This week at the movies, a big polar bear heads to New York, Kevin Hart and Ice Cube re-team for “Ride Along 2,” and John Krasinski goes beyond the call in “13 Hours.” Let’s take a closer look at new movies in theaters.

NORM OF THE NORTH

A polar bear of many words, Norm’s greatest gripe is simple: there’s no room for tourists in the Arctic! But when a maniacal developer threatens to build luxury condos in his own backyard, Norm (Rob Schneider) does what all normal polar bears would do … he heads to New York City to stop it.

With a cast of ragtag lemmings at his side, Norm takes on the big apple, big business, and a big identity crisis to save the day.

Kevin Hart and Ice Cube lead the returning lineup of “Ride Along 2,” the sequel to the blockbuster action-comedy that gave us 2014’s most popular comedy duo (they really are very funny).

As his wedding day approaches, Ben (Hart) heads to Miami with his soon-to-be brother-in-law James (Cube) to bring down a drug dealer who’s supplying the dealers of Atlanta with product.

13 HOURS: THE SECRET SOLDIERS OF BENGHAZI

This adaptation of Mitchell Zuckoff’s book centers on the true account of the events of September 11, 2012, when terrorists attacked the US State Department Special Mission Compound, along with nearby CIA station “The Annex,” in Benghazi, Libya.

A team of six American security operators went beyond the call of duty with courage and heroism to repel the attackers and protect the Americans stationed there. This is their personal account of what happened during the 13 hours of that now-infamous attack.