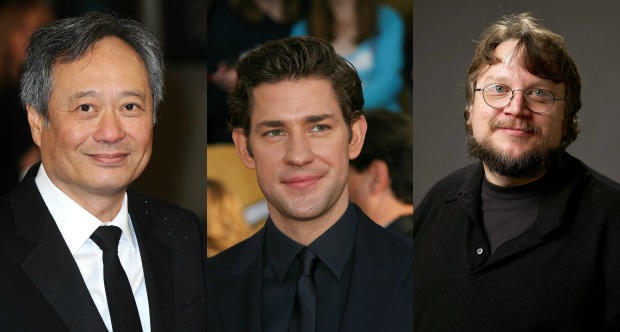 I don’t know how they pick who’s going to wake up at the crack of dawn and announce the Oscar nominations. I wonder if the people have to “apply” to do it, or whether they’re nominated to do it, or perhaps there’s a big publicity campaign involved.

And you’d think they would have at least one male and one female doing the announcing, to mix it up a little. But that’s not the case this year.

The Academy sent out a notice today that they’ve found their announcers. Guillermo del Toro, John Krasinski (whose film “13 Hours” hits theaters this week, so perhaps his publicity team got him onto the announcement stage), and Ang Lee will join Academy President Cheryl Boone Isaacs for nominations in all 24 Oscar categories at a special two-part live news conference on Thursday, Jan. 14, at the Academy’s Samuel Goldwyn Theater in Beverly Hills. “The Oscars” will air Sunday, Feb. 28, live on ABC.

The Nominations Announcement is a live news conference where more than 400 media representatives from around the world will be gathered. The event will be broadcast and streamed live on www.oscars.org/live.

Nominations information for all categories will be distributed simultaneously to news media in attendance and via the official Oscars website, www.oscar.com.

A director, writer and producer, del Toro’s films include “The Devil’s Backbone,” the “Hellboy” films, “Pan’s Labyrinth,” which earned him an Oscar nomination for Original Screenplay, and 2015’s “Crimson Peak.” He also is the creator of the television series “The Strain.”

Krasinski’s role in the Emmy-winning series “The Office” launched him into the public eye in 2005. His feature credits include Paramount’s aforementioned “13 Hours: The Secret Soldiers of Benghazi” and “Promised Land,” which he also co-wrote and produced. He directed and stars in “The Hollars,” premiering at Sundance this month.