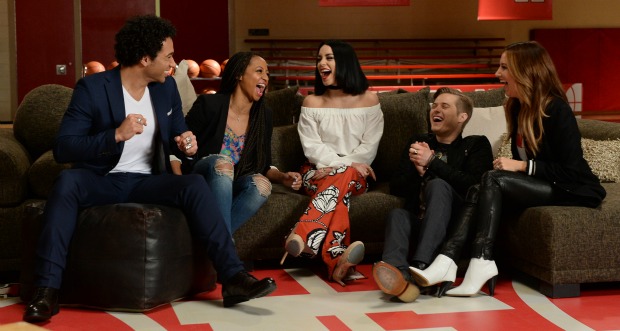 Here’s good news for “High School Musical” fans! The stars of the mega-popular franchise are reuniting in a special telecast on Wednesday, Jan. 20 at 8 p.m. ET on the Disney Channel.

First of all, I can’t believe it’s been ten years, and we were right in the thick of it at the time because my daughter was eight. Second, only Vanessa Hudgens, Ashley Tisdale, Lucas Grabeel, Corbin Bleu and Monique Coleman are reuniting in person; fellow star Zac Efron is sending in a pre-taped message to “High School Musical” fans.

Gossipy me wonders if things are awkward between him and Vanessa Hudgens, and that’s why he won’t be there in person. I have no idea what the relationship is between the former lovebirds. Or maybe since he’s doing all these raunchy movies now – “That Awkward Moment,” “Neighbors,” “Dirty Grandpa,” and the upcoming “Neighbors 2” – that he doesn’t want to be associated with the “High School Musical” franchise. Inquiring minds want to know.

At any rate, it’ll be fun to see most of the gang back together. The movie – which landed two Emmy awards – premiered on Jan. 20, 2006, and delivered 7.7 million viewers in the U.S. At the time, it was the highest rated show ever on Disney Channel, and the TV movie soundtrack was the first to reach #1 on the Billboard Top 200 chart. It went on to become the #1 album of 2006, as well as the #1 soundtrack and #1 Kids’ album of that year.

I mean, “High School Musical” is just fun and innocent, and harks back to a time when people in movies spontaneously broke into song. The story follows two high school students, Troy (Efron), a popular basketball player, and Gabriella (Hudgens), a shy, brainy newcomer, who share a secret passion for singing.

When these two seemingly polar opposites decide to join forces and go out for the lead roles in the school musical, it wreaks havoc on East High’s rigid social order. In a desperate effort to maintain the status quo, the school’s various cliques conspire to separate the pair and keep them from performing. But Troy and Gabriella inspire other students to go public with some surprising hidden talents of their own.