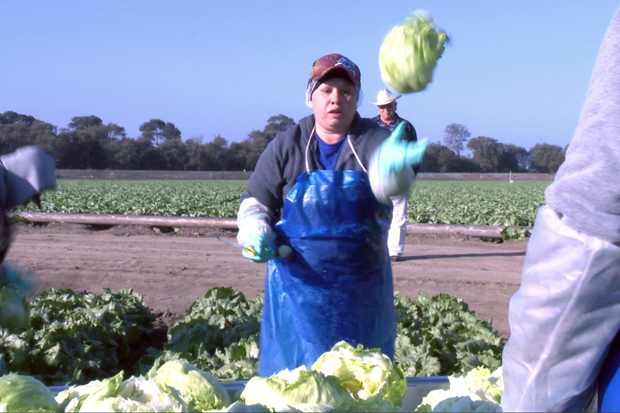 “East of Salinas” is a documentary that puts a face on the plight of migrant workers, and the majority of the faces we see are those of children. These are kids who are going to bed hungry many nights and living in fear of the INS. They often live without at least one parent for months at a time, and they have to move frequently to hide from immigration officials. The estimate is that there are at least two million undocumented children in the U.S. today.

Filmmakers Laura Pacheco and Jackie Mow follow José, an 8-year-old boy from Mexico, whose parents are farm workers near Salinas, California. We meet a beloved teacher, Oscar Ramos, who tries to help families like José’s, but often, when he goes to visit, he finds a family missing – gone again because they live in constant fear of deportation.

Ramos tries to give the children experiences they might never have otherwise. Even though some of them live close to the beach, for example, they might never have been there. They certainly never get to a museum or the theater, never get to think about expanding beyond their current circumstances, without the help of dedicated teachers like Ramos.

The film is primarily a slice of life lived by people many Americans don’t know. Some Americans want them out, while others want to find a way to help them. When you look in the face of children like José, it’s hard not to want to find a compassionate solution, however complex that may seem.