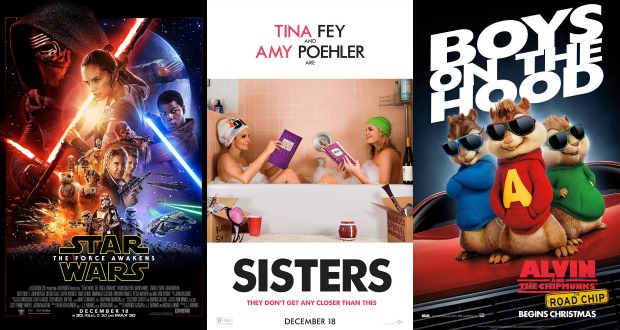 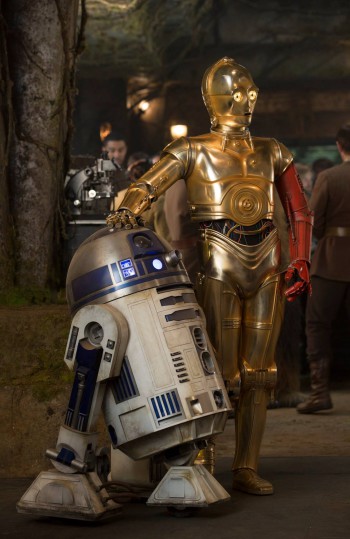 New movies this week include, at long last, the much anticipated new “Star Wars” installment, as well as Amy Poehler and Tina Fey in “Sisters” and a brand new “Chipmunks” movie! Let’s take a look at the new movies in theaters this week.

Get ready for more thrills from a galaxy far, far away! This installment in the popular “Star Wars” franchise takes place 30 years after the Rebel Alliance’s victory over the second Death Star (“Return of the Jedi”). The galaxy is still at war, and a New Republic has arisen, but the First Order has sprung from the ashes of the Galactic Empire.

Many of the heroes we all know and love – Leia Organa (Carrie Fisher), Han Solo (Harrison Ford), Chewbacca (Peter Mayhew), R2-D2 (Kenny Baker) and C-3PO (Anthony Daniels) – are still active and fighting in the Resistance. They’re joined by new heroes, including Poe Dameron (Oscar Isaac), a starfighter pilot; Finn (John Boyega), a former First Order Stormtrooper who uses the lightsaber that once belonged to Anakin Skywalker and later Luke Skywalker; Rey (Daisy Ridley), a scavenger; and a rolling droid known as BB-8.

They’re opposed by powerful new forces, including Captain Phasma (Gwendoline Christie) of the First Order and Kylo Ren (Adam Driver), a mysterious dark side user wielding a red lightsaber of unusual design. Directed by J.J. Abrams, this movie is written by Abrams, Michael Arndt and Lawrence Kasdan based on characters by George Lucas.

ALVIN AND THE CHIPMUNKS: THE ROAD CHIP

Through a series of misunderstandings, Alvin (voiced by Justin Long), Simon (Matthew Gray Gubler) and Theodore (Jesse McCartney) come to believe that Dave (Jason Lee) is going to propose to his new girlfriend in Miami — and dump them.

They have three days to get to him and stop the proposal, saving themselves not only from losing Dave, but possibly from gaining a terrible stepbrother. Directed by Walt Becker, this cute family comedy also stars Bella Thorne, Kimberly Williams-Paisley, Kaley Cuoco, Anna Faris and Christina Applegate.

Tina Fey and Amy Poehler reunite for this new comedy from “Pitch Perfect” director Jason Moore about two disconnected sisters summoned home to clean out their childhood bedroom before their parents sell the family house. Looking to recapture their glory days, they throw one final high-school-style party for their classmates, which turns into the cathartic rager that a bunch of world-weary adults really need.