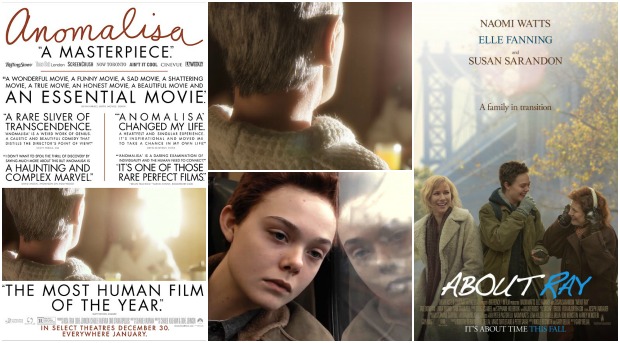 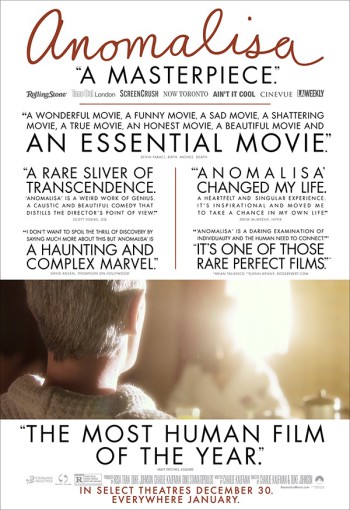 Happy New Year! After the giant opening of “Star Wars: The Force Awakens” last week (which at this writing has scored $1.09 billion at the global box office), we have a mish-mash of new movies opening in theaters this week. Let’s take a look.

Directed by Charlie Kaufman and Duke Johnson, this stop-motion animated dramedy for grownups has already landed several trophies this awards season. It follows the story of Michael Stone (voiced by David Thewlis), an author of books on the subject of customer service.

He struggles with his inability to connect with people, and one night while on a routine business trip, he meets a stranger who changes his world view. Also stars Jennifer Jason Leigh and Tom Noonan.

Directed by Gaby Dellal, this drama stars Elle Fanning as a transgender teenager, formerly named Ramona, who realizes and pursues his true identity as a male. His single mother, Maggie (Naomi Watts), must track down Ray’s biological father, Craig (Tate Donovan), to get his legal consent to allow Ray’s transition.

Ray’s lesbian grandmother, Dolly (Susan Sarandon), is having a hard time accepting that she now has a grandson. They must each confront their own identities and learn to embrace change and their strength as a family in order to find acceptance and understanding.