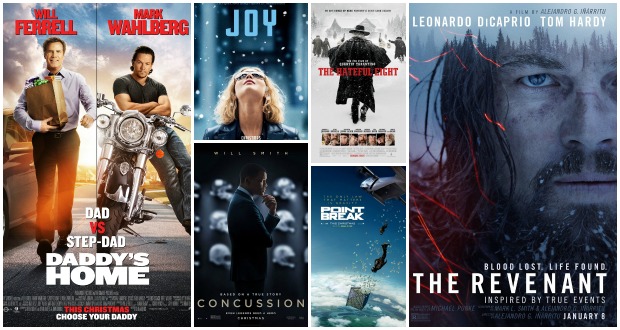 New movies this week feature A-List stars like Will Smith, Leonardo DiCaprio, Kurt Russell and Jennifer Lawrence. Wow – what a way to end the year! Let’s take a closer look at new movies in theaters this week. 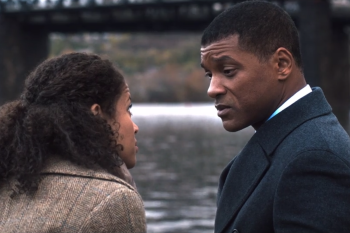 This film is based on the David vs. Goliath story of Dr. Bennet Omalu (Will Smith), the forensic neuropathologist who discovered the first football-related brain trauma in a pro player and fought to bring awareness to the public.

In his search for the truth behind the devastating malady, Omalu’s quest humanizes the price paid by professional athletes in impact sports, but also by people who challenge the status quo as it exposes the political, cultural and corporate interests that fuel the business of sports.

The athletes are suspected of carrying out a spate of crimes in extremely unusual ways. Now deep undercover and with his life in danger, Utah strives to prove they are the architects of a string of inconceivable crimes. The amazing stunts are performed by elite athletes representing the world’s best in big-wave surfing, wingsuit flying, sheer-face snowboarding, free rock climbing, and high-speed motorcycling.

Sean Anders directs “Daddy’s Home,” a comedy about a mild-mannered radio executive (Will Ferrell) who strives to become the best stepdad to his wife’s two children. But complications ensue when their freewheeling and freeloading real father (Mark Wahlberg) arrives, forcing him to compete for the affection of the kids. Also stars Linda Cardellini, Thomas Haden Church and Hannibal Buress.

R for strong bloody violence, a scene of violent sexual content, language and some graphic nudity | In Theaters 12/25 | Ok for Kids 18+ | Weinstein | Reel Preview: 4.5 of 5 Reels | The Hateful Eight

Quentin Tarantino’s “The Hateful Eight” is set shortly after the Civil War. As a stagecoach hurtles through the wintry Wyoming landscape, its passengers, bounty hunter John Ruth (Kurt Russell) and his fugitive Daisy Domergue (Jennifer Jason Leigh), race towards the town of Red Rock where Ruth will bring Domergue to justice. 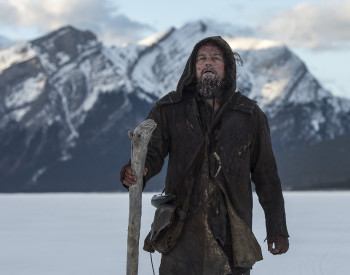 Inspired by true events, “The Revenant” follows one man’s epic adventure of survival and the extraordinary power of the human spirit. In an expedition across the uncharted American wilderness, legendary explorer Hugh Glass (Leonardo DiCaprio) is brutally attacked by a bear and left for dead by members of his own hunting team.

In a quest to survive, Glass endures unimaginable grief, as well as the betrayal of his confidant John Fitzgerald (Tom Hardy). Guided by sheer will and the love of his family, Glass must navigate a vicious winter in a relentless pursuit to live and find redemption.

Directed by David O. Russell, “Joy” tells the story of a family across four generations, centering on a girl who ends up founding a business dynasty. Betrayal, treachery, the loss of innocence and the scars of love pave the road in this intense emotional and human comedy about becoming a true boss of family and enterprise facing a world of unforgiving commerce.